Multi-colour LED lights under transparent ejector button illuminate in different colours for better visibility at night and act as reminder for wearing seatbelt. 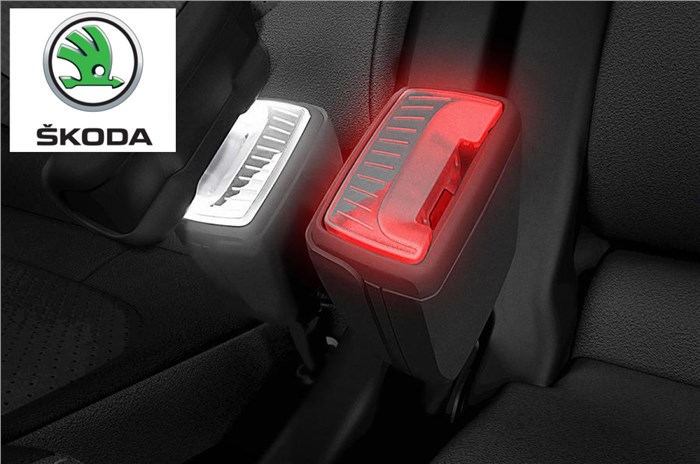 Skoda has patented a new LED seatbelt buckle that will not only reduce the hassle of trying to put on seatbelts at night but also as an indicator to wear your seatbelt.The tech features a pair of multicoloured LED lights under the transparent eject button that illuminate in three colours – white, red and green, subject to the seat being occupied and the occupant wearing the seatbelt.

When nobody is in the seat, the lights glow white, making the buckle visible in the dark. However, once a passenger sits down, the second mode activates, causing the buckle to glow red to remind the passenger to put on the seatbelt. It then turns green once the belt is secure.

The buckles feature a crystalline pattern on the transparent eject button, which Skoda said helps disperse light, increasing the button’s glow. Users can also programme the buckle to flash, making it even more noticeable at night.

Skoda said the red glow will be particularly useful for parents who can “see immediately” if their children haven't put on their belts properly but will improve safety for all passengers.

When will it arrive in Skoda cars?

The buckle is still under development, and Skoda said there are "no concrete plans at the moment" to say if and when it will roll out the technology on its production cars. Some Audi models already have belt buckles surrounded by a white LED strip, but this is less advanced and not intended as a safety feature.

The LED buckle is the latest of several innovations recently pioneered by Skoda. Last year, the manufacturer filed 94 patent applications, more than any other company in the Czech Republic.

The firm has also partnered with a number of start-up companies in Israel. In 2016, it established a standalone firm called Skoda Digliab to find start-ups, developing technology that could benefit Skoda. Israeli start-ups are particularly highly regarded for their work in artificial intelligence and cybersecurity.

Skoda is gearing up for a busy 2021 which will see the carmaker introduce all-new mass-market models to replace the ageing Rapid and an all-new Creta rival. Built on the India-specific MQB A0 IN platform, the two models are a part of the VW Group’s India 2.0 plan which will also see the introduction of sister models to the two from Volkswagen. Both Skoda and Volkswagen provided a glimpse of their upcoming mid-sized SUVs, earlier this year with the Skoda Vision IN concept and the VW Taigun.

Also on the cards for 2021, is the new Octavia and petrol Kodiaq which were initially expected to arrive this year. In more recent news, Skoda expanded into the used car space with the launch of its Certified Preowned programme, early last month with an eye on growing in the Indian market.