The Hector Plus SUV will come with BS6-compliant petrol and diesel engines, and gets design tweaks. 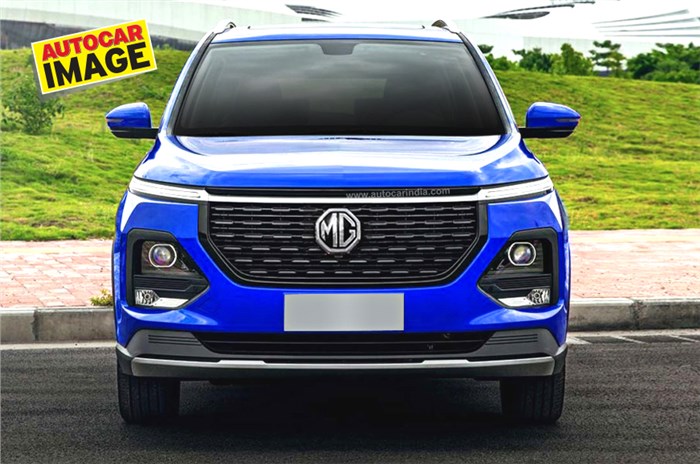 MG Motor India will most likely be unveiling the six-seat version of its popular Hector SUV on February 5 at the Auto Expo 2020, which takes place at Greater Noida. Likely to be called the Hector Plus, the six-seat version of the standard SUV has been seen road-testing since a few months in India. MG’s Hector Plus will get a six-seat three-row cabin with two individual captain’s chairs and armrests for the second row. Interior tweaks aside, the Hector Plus will also get styling changes in order to give it a unique and more premium positioning in the brand’s India line-up. This is similar to what Tata seems to be doing with the Harrier and its three-row derivative, the Gravitas, which is also slated for an Auto Expo unveil.

Coming back to the Hector Plus, the six-seat SUV gets a different design for its LED daytime running lights and the headlamp cluster, which now gets chrome bits as well. The grille’s shape is different too but it retains its honeycomb design. At the back, the Hector Plus gets unique tail-lamp inserts and styling tweaks to the bumper with faux dual-exhaust tips. These exterior changes add to the Hector’s length by around 40mm. The Hector Plus is also expected to get new-design alloy wheels.

On the inside, apart from the three-row seating layout, the Hector Plus will get mild cosmetic tweaks and an updated infotainment software that will also be seen on the 10.4-inch portrait style touchscreen on the standard five-seat Hector. The model will also come with a panoramic roof, at least on the top variant.

Under the hood, the Hector Plus will come with either a BS6-compliant 1.5-litre turbo petrol, a 1.5-litre petrol with 48V mild-hybrid system, or a 2.0-litre diesel engine. Gearbox choices are likely to remain the same as the standard Hector, which includes a 6-speed manual and a 7-speed DCT automatic for petrol and a 6-speed manual for the diesel. There are no talks of a diesel-automatic version for the Hector Plus.

MG Motor India will announce pricing for the Hector Plus most likely around April 2020, after it launches the BS6-compliant version of the standard model. The six-seat Hector Plus will take on the likes of the Tata Gravitas, Mahindra XUV500 and the next-gen Hyundai Creta, which will get a seven-seat option a little later.

Along from the Hector Plus, MG Motor India will showcase as many as 14 cars and SUVs at its pavilion at the upcoming Auto Expo 2020.  The company will also unveil a fresh MPV concept at the motor show.