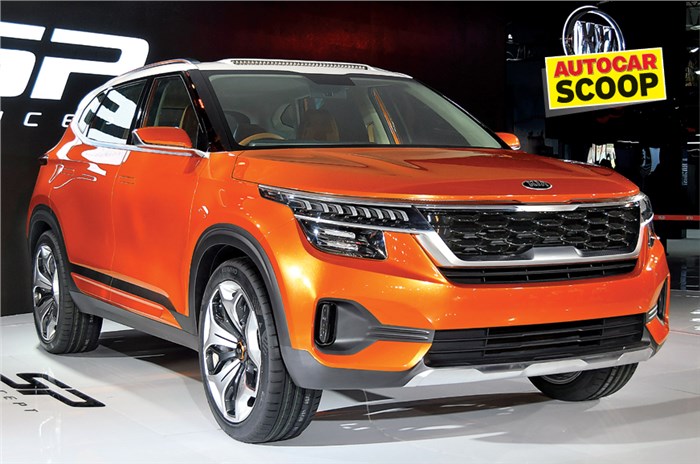 Four more cars will follow the production version of the SP Concept SUV; a sub-4m SUV will be the second Kia for India.

Kia Motors may be late to the India party, but it intends to be on the ball from day 1. We have learned that it's planning a product offensive that will see a total of five cars being launched in just 18 months' time.

With the production version of the SP Concept set to go into production mid-2019, Kia will follow it up with four more cars over the next year and a half – two of them locally manufactured, two shipped in as CKDs – to have a five-strong line-up by 2021.

After the SP, Kia will bring out a sub-4m compact SUV, which will likely share its basic underpinnings with the Hyundai Carlino compact SUV (due in 2019). However, Kia's version of the compact SUV will look entirely different. Kia is globally renowned for its funky, off-beat designs and you can expect to see the signature 'Tiger Nose' grille, LED lighting and other nifty design touches on its compact SUV. The company has shown it intends to offer customisation options such as a contrast roof and interior colour choices with the SP, and the same should be the case with the compact SUV.

What the Kia compact SUV will also likely share with the Carlino, is its engines. On the petrol front, it'll get the 1.0-litre turbo-petrol making 118hp, and as for diesel, it'll use the 1.5-litre, BS-VI-compliant unit that is currently in the works. Expect Kia to offer a choice of manual and automatic gearboxes on the compact SUV.

While the third car to be manufactured locally hasn't yet been confirmed, we understand it will also be SUV-flavoured. The Sportage (Tucson-sized) and Sorento (Santa Fe-sized) are the SUVs that are being considered for the CKD operation.

Kia's intention to burst on to the scene with an extensive (and SUV-heavy) line-up in a rather short amount of time shows just how serious it is about the Indian market.