Renault Triber: Which variant to buy?

The 7-seat Renault Triber is available in a total of four variants, all spaced out by a gap of roughly Rs 50,000. We pick the one that makes for the most sensible buy. 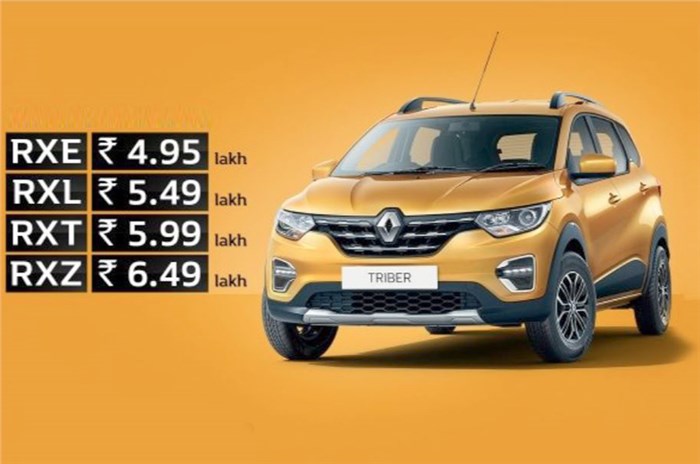 Being Renault’s first all-new product for our market in nearly two years, the Triber is a vital addition to the French carmaker’s India line-up. The Renault Triber measures under four metres in length and is one among the few sub-four-metre offerings in India to have three rows of seats. Based on a modified version of the Kwid’s CMF-A platform, the Triber aims to offer maximum space within its small footprint, and its third row can be removed to free up an impressive 625 litres of luggage space. Launched in August, the Renault Triber’s price ranges from Rs 4.95 lakh to 6.49 lakh (ex-showroom), and there are four variants on offer. Which is the one to pick? Allow us to help.

What are the engines and gearboxes on offer?

There aren’t any options to confuse buyers when it comes to the engine and gearbox combination. For now, the Renault Triber gets a sole engine-gearbox combo – an upgraded version of the Kwid’s 1.0-litre, three-cylinder petrol engine, which makes 72hp and 96Nm of torque, paired to a 5-speed manual gearbox. The Renault Triber’s official fuel efficiency figure is 20kpl. Renault will introduce a turbocharged version of the 1.0-litre petrol engine and an AMT gearbox option at a later stage. Do note that the 1.0-litre petrol engine is BS4-compliant at this time, and will be upgraded to meet BS6 emission norms before the April 2020 deadline.

Once again, Renault has kept things simple with the Triber’s variant line-up. There are four variants to choose from, all spaced out by a gap of roughly Rs 50,000. The range starts with the Triber RXE (Rs 4.95 lakh), which gets basics such as an air-conditioner, electric power steering, front power windows, dual airbags, ABS, rear parking sensor, seatbelt reminder and speed alert systems.  Following the RXE is the Triber RXL, which, for an additional Rs 54,000, adds tilt adjust for the steering wheel column, an audio system with Bluetooth and USB connectivity, a second AC unit and vents for the 2nd and 3rd rows, remote central locking, body-coloured door handles and outside mirrors and full wheel covers.

For an extra Rs 50,000, you get the Triber RXT, which packs in front and rear skid plates, roof rails, electrically adjustable outside mirrors, rear power windows, an 8.0-inch touchscreen infotainment system with Apple CarPlay and Android Auto, two additional speakers, a cooled lower glove box and a 12-volt accessory socket for the second row. And finally, there’s the Triber RXZ at Rs 6.49 lakh, which gets two side airbags, LED DRLs, two tweeters, smart access card, push-button start, a reverse camera, rear wiper and defogger and a 12-volt accessory socket for the third row.

Which is the variant to buy?

While it is priced rather attractively, the base Triber RXE is a bit too barebones and even the RXL – which sits just above the RXE – is light on features. All said and done, the Triber RXT seems to offer the right mix of features at a competitive price and appears to be the value pick in the range. However, it is the top-spec Renault Triber RXZ that we recommend, simply because it offers more in the way of safety with a total of four airbags, a reverse camera and rear wiper and defogger.