More details on Renault’s new sub-4m seven-seater will be revealed before its India launch in July. 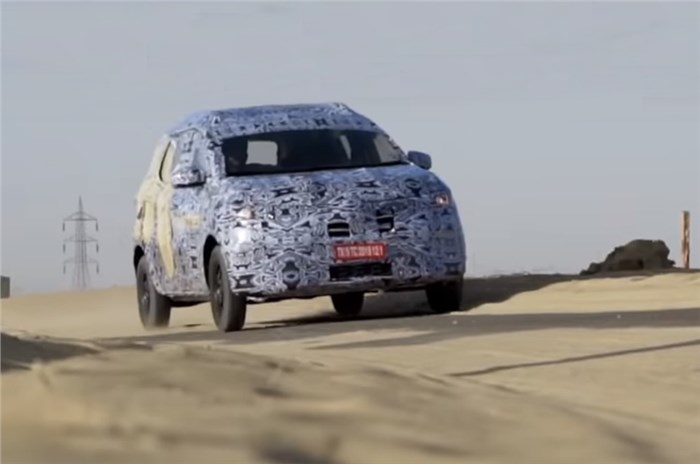 Renault has announced that it will officially take the wraps off its new Triber (earlier known by its codename RBC) on June 19, 2019. The unveiling will mark the seven-seater’s global debut, before the Renault Triber arrives in showrooms in the country in July.

The Triber will sit above the Kwid in Renault India’s line-up and is expected to be priced in the Rs 5.3 lakh to Rs 8 lakh bracket. Based on teasers released and spy shots of the model, the Renault Triber is expected to get new headlights with LED DRLs, a new V-shaped chrome grille and chrome inserts on the bumper.

The Triber, which is based on a modified version of the Kwid’s CMF-A platform, will feature a functional design that makes it possible to offer a lot more space in the smallest footprint possible. On the inside, the Triber will get dual-tone interiors and will share the steering wheel and other controls with the Captur. Renault’s compact seven-seater will also come with a large touchscreen infotainment system (larger than the 7.0-inch unit on the Kwid, Lodgy, Duster and Captur) with Apple CarPlay and Android Auto, along with a few intelligent features such as driving-style coaching and driver economy rating. There will be a dedicated AC vent for the third row of seats, which are removable to create more space to carry luggage.

In terms of safety kit, Renault will equip the Triber with dual front airbags, ABS, rear parking sensors, and a speed warning system as standard, though higher variants are expected with a reverse camera and more airbags.

Powering the Renault Triber will be a tuned version of the Kwid’s 1.0-litre (BR10) three-cylinder petrol engine, which is expected to make about 7hp more (about 75hp). While the Kwid’s 5-speed manual gearbox will be offered at first, a 5-speed automated manual transmission is also likely to be added to the Triber range at a later date. There are also talks of a turbocharged 1.0-litre petrol engine being added to the seven-seater’s line-up.