Fresh styling for Mahindra Roxor moves it away from Jeep-like design. 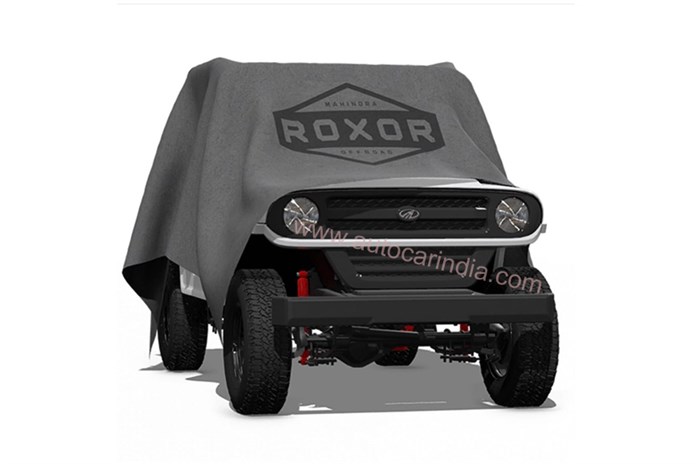 Mahindra will soon release a heavily updated version of its US-market Roxor off-roader. We’ve got our hands on a new teaser image that reveals the big change that has been done to the SUV’s front end.

What is the Mahindra Roxor?

The Roxor is Mahindra’s off-roader that falls under the ‘side-by-side’ category (recreational vehicles that are not road legal) in the North American market. It is built in Auburn Hills, Michigan by Mahindra Automotive North America (MANA), which is Mahindra’s subsidiary in the US. The off-roader is based on the now-discontinued first-gen Mahindra Thar and shares almost all of its underpinnings and its running gear.

Why has the Mahindra Roxor been given such a big facelift?

Since the off-roader’s launch in the United States back in May 2018, the Roxor has been plagued by multiple lawsuits by FCA (Fiat Chrysler Automobiles), thanks to its original design, which closely resembled older Jeep models. We reported earlier this month that, in response to the legal action, Mahindra would be adopting an entirely a fresh look for the off-roader and the image you see here confirms this.

The new-look Roxor continues its retro-theme, albeit without the Jeep influence, and now gets a much wider nose than before. This also allows more space between the headlamps that are now separated by a twin-horizontal slat grille, with honeycomb inserts finished in black. The wider bonnet houses the wheels within its width, and the rest of the front end is rather bare, with a narrow lower grille that tapers down to the front bumper, giving you a nice view of the exposed suspension and tyres. This is more so thanks to the front fenders that seem to have been trimmed back to the same position as the headlamps. The headlamps themselves continue to be round and seem to have LED elements within them. Apart from these changes, expect Mahindra to throw in some more tweaks to the Roxor to make it look a bit different from the original Jeep-style version.

Mahindra Roxor: What’s under the skin?

The Roxor will most likely continued to be sold with the same 64hp, 2.5-litre diesel engine as before, which is quite similar, mechanically, to the 2.5-litre Di engine that was available in many Mahindra models in India, including the Thar. Two gearbox choices are on offer – a 5-speed manual and a 6-speed automatic.

We expect the new Roxor to continue with the same off-road gear as well, comprised of a 2-speed transfer case, full floating axles with upgraded 5.38:1 gearing, leaf-spring suspension all around, disc brakes up front and drum brakes at the rear.

While the bare-bones Roxor recreational vehicle is likely to never come to India, Mahindra has been readying a slew of new and updated model launches for our market. The second-gen Thar and the TUV300 with a BS6 engine are expected to be launched this year. Come 2021, Mahindra will bring out the second-gen XUV500 SUV, and Mahindra will introduce the eKUV100 and the eXUV300 electric vehicles (EVs) in the Indian market in the near future.

Mahindra Roxor to get all-new design

Pawan Goenka talks about the upcoming new Mahindra Thar, its heritage and more