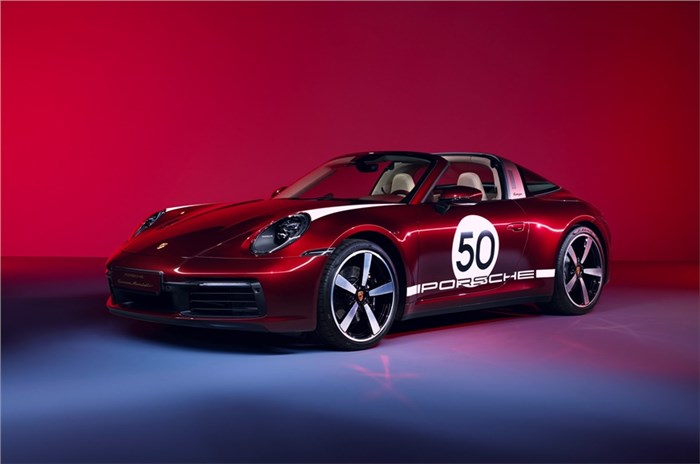 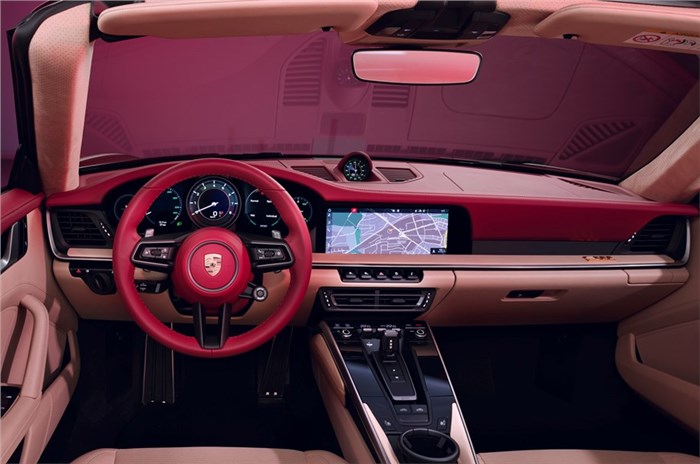 Porsche recently took the covers off the 911 Targa 4S Heritage Design Edition. Limited to just 992 units, the model features bespoke design elements harking back to details of iconic Porsche models from the yesteryear. It is the first, full-fledged Heritage offering from Porsche Exclusive Manufaktur, the automaker's in-house personalisation division. We caught up with Alexander Fabig, vice president, individualisation and classic, Porsche AG, to know more about the division's future plans and better understand what goes into creating special one-offs.

Demand for individualisation on the rise

Highlighting the increasing potential of offering bespoke models, Fabig said, "There is a growing demand in general and we see a trend to go and individualise a product. People want to have it tailored to their needs and to their taste."

He mentioned that the Heritage Design strategy was an integral part of Porsche's product plans and that the increasing demand for personalisation had encouraged the company to implement it "in an innovative and modern way". As such, Porsche Exclusive Manufaktur is working with the Style Porsche design department to reinterpret models in the 911 range, using design elements from Porsche vehicles dating back to the 1950s, through to the 1980s.

Not just limited to heritage offerings, the automaker's customisation division already provides a catalogue of options for owners to choose from and spec their vehicles, which sees "more than 50 percent of the 911s produced reaching the Exclusive Manufaktur workshop".  Though the 911 is the most individualised model range that Porsche has, other products like the 718, Taycan, Macan and Cayenne also see a trend of buyers speccing their vehicles as per their individual tastes and use cases.

The individualisation boss said that the process began with "taking in the feeling that you have when you enter a 356 or an early 911" and then re-creating the atmosphere for the 992-gen vehicle. This inspired the team to choose the most popular paintwork, materials and trim from the ‘50s and ‘60s for the limited-run Targa. "We know that colour and trim is the topic through which a lot of people like to express their own individual taste and lifestyle."

The Targa special edition comes with an exclusive Cherry Red metallic colour that was worn by the 356. It gets white livery on the front wings and sides, gold logos all around and a Porsche Heritage badge on the rear engine cover. Notably, the model wears the 1963 Porsche Crest on the bonnet, steering wheel and wheel centres. 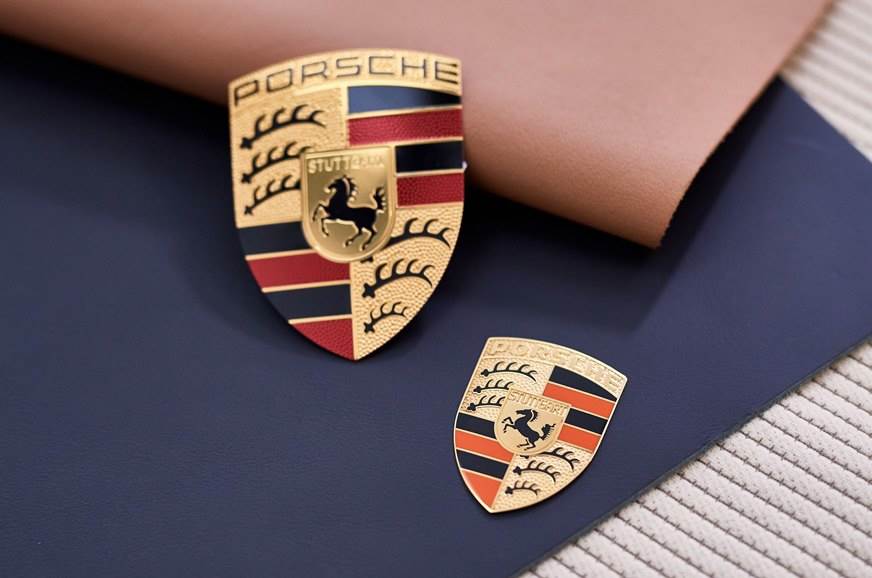 Modern Porsche Crest (left) and 1963 Porsche Crest (right): Notice the Porsche lettering embossed in gold and the orange stripes on the historical crest.

The cabin is reminiscent of the 356 as well. It sports a two-tone leather upholstery finished in red and beige, uses corduroy on the seat centres and door panels, and even the instrument cluster dials get special attention by the way of green illumination.

It's all in the details

"Attention to details is one of the main topics, I think, when it comes to Exclusive Manufaktur," expressed Fabig. Porsche's meticulous drive to impart the limited-run model a unique character can be found in minute details like the company's historic crest being emblazoned even on the vehicle keys. 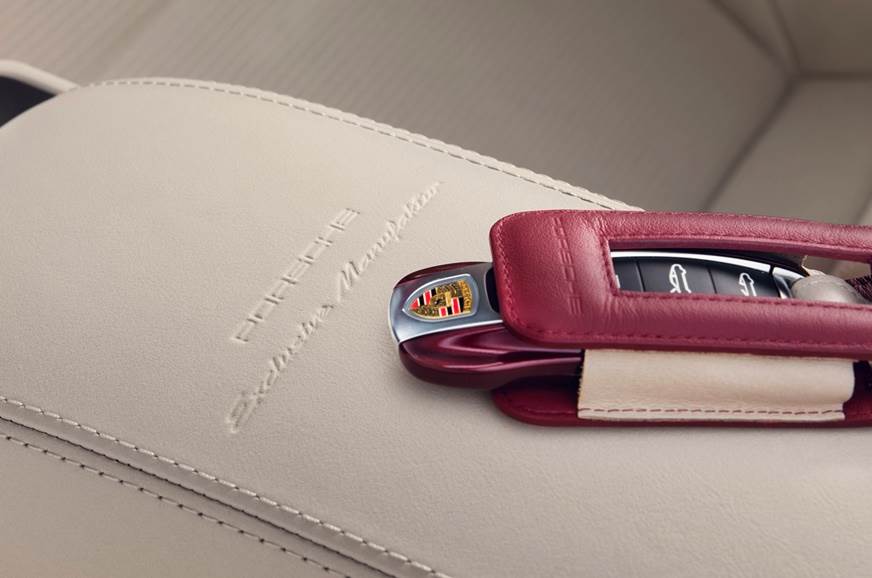 Attention to detail: The 911 Targa 4S Heritage Design Edition’s key carries the 1963 Porsche Crest, like the rest of the car.

For the materials used in the cabin, the designers not only aimed at achieving a traditional look, but also strived at getting the feeling as well as the smell right. Additionally, if customers have specific requests over and above the options offered by the company, Exclusive Manufaktur promises to try and fulfil such special wishes too.

The Heritage Edition might have a characteristic flavour, but it is no different from a standard Targa under the skin. "The 992 is the perfect car, there is no need to change one thing to the nuts or bolts," explained Fabig. As such, it shares the standard model's 3.0-litre, flat-six, twin-turbocharged petrol engine putting out 450hp and 530Nm of torque. An 8-speed dual-clutch gearbox helps put down power through all four wheels.

With its Heritage series, Porsche has had to tread a careful line so as to deliver "the feeling of being in a special environment, but not necessarily the feeling of sitting in an old car because that is not what we want." As such, the brand couldn't afford removing any contemporary features for the sake of authenticity, especially with customers seeking the right balance between modern comforts and classic design elements. "If we offer a completely analogue car without driving assistance, I think we wouldn’t meet the customer demand," elaborated Fabig. 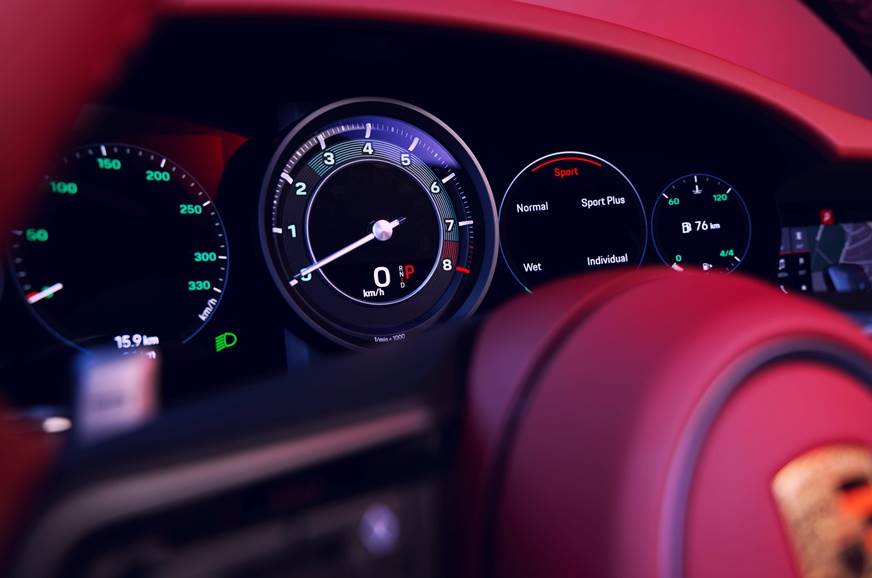 Contemporary yet traditional: All new-age 911s, including the individualised ones, get an analogue tachometer in the centre flanked by digital dials.

Such is the want for the latest connectivity features that Porsche has even gone a step further and recently introduced the option of retrofitting classic 911s with modern infotainment systems.