The Valkyrie roadster will be revealed along with the production-spec Valhalla supercar. 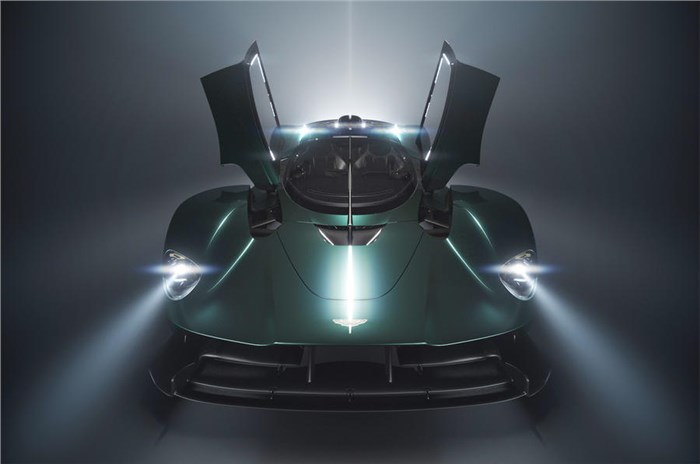 Aston Martin has previewed an open-roof version of its Valkyrie hypercar, which will be revealed in full on August 12 at the Pebble Beach Concours d'Elegance in California, USA.

Aston Martin Valkyrie roadster: what we know so far

To debut the roadster, the brand has chosen the occasion marking the 70th anniversary of the first Aston Martin sold in the US. Since the brand's launch in the country with the DB2 in 1951, some 25 percent of all Aston Martins built have been sold in North America.

To celebrate the anniversary of its US division, Aston Martin will host Pebble Beach showgoers at a private "luxury club house" nearby, where tribute will be paid to the "past and present" of the British brand with a historic model display and two new-car debuts. The Valkyrie roadster will be shown privately at the event on August 12 before going on display from August 13.

The preview image gives little away beyond confirming that the doors will be hinged from the front in a scissor arrangement, rather than the hardtop car's gullwing set-up. It's not yet confirmed whether the Valkyrie Roadster will be a permanently open-top proposition, like the new Aston Martin V12 Speedster, or whether it will be offered with a removable roof panel.

Aside from the bodywork revisions, the new open-top can be expected to closely match the hardtop for performance statistics, using the same Cosworth-supplied 6.5-litre V12 and carbon-fibre tub.

Appearing alongside the open-roof Valkyrie will be the new production-spec Valhalla supercar, making its US debut following its unveiling in the UK last month.

Aston Martin recently launched its first SUV in India – the DBX – at a starting price of Rs 3.82 crore (ex-showroom). The British marque’s India range also includes the DB11 and the Vantage supercars.