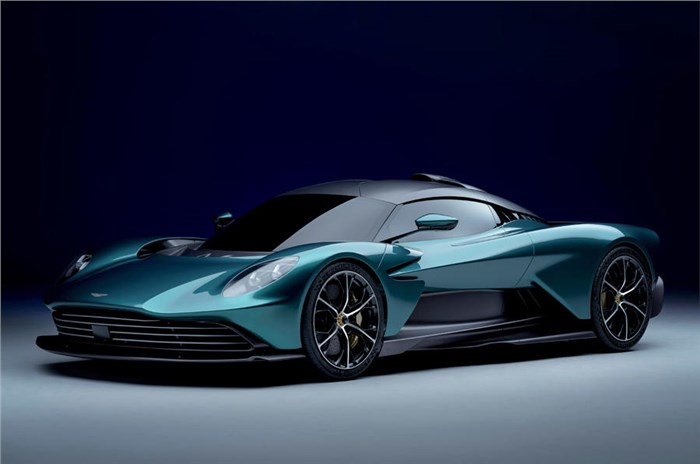 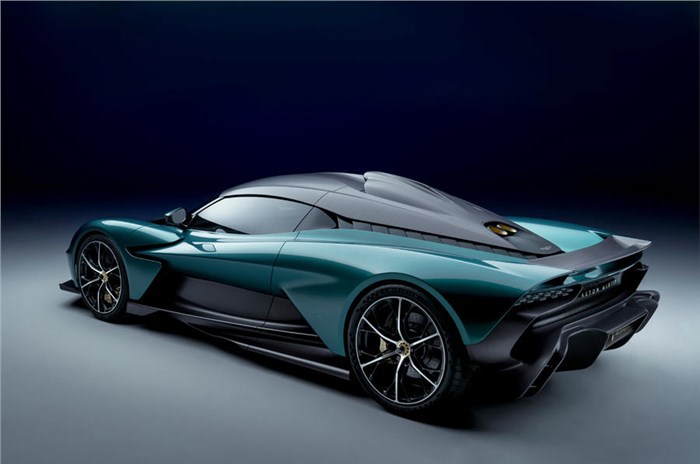 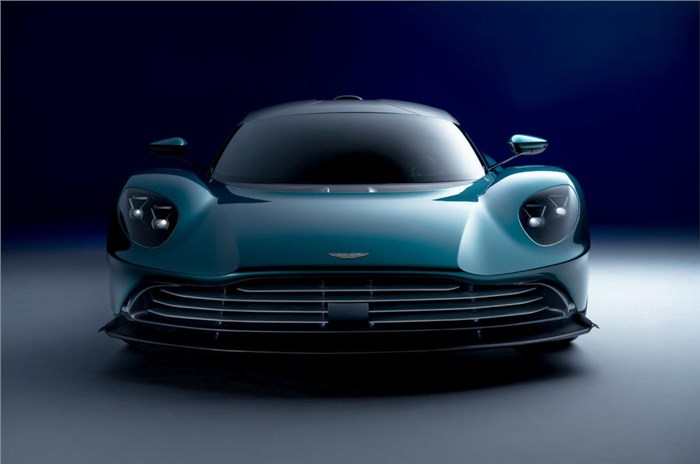 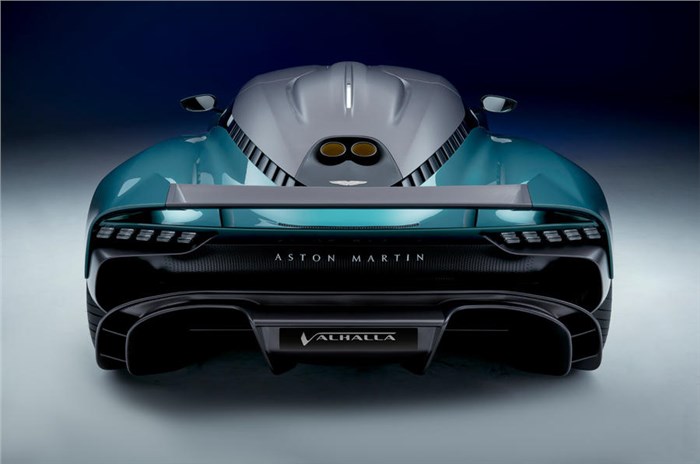 As the Gaydon company's first plug-in hybrid model, the Valhalla "heralds a new definition of Aston Martin", according to the firm. It is also the first all-new model launched under the guidance of new CEO Tobias Moers and forms an integral part of his bold 'Project Horizon' transformation plan for the brand. Under the plan, Aston will launch "more than 10 cars" by 2024, including the Valhalla, the closely related but less potent Vanquish supercar, and the ultra-exclusive V12-engined Valkyrie hypercar.

One of the biggest influences in the Valhalla’s two-year transformation from the RB-003 Geneva concept to production has been Aston’s new factory-backed F1 team, learnings from which are said to have informed almost every aspect of the car. Fittingly, it has been shown for the first time at the team’s Silverstone headquarters just ahead of the British Grand Prix, in which Aston is competing for the first time in 61 years.

Notably, the Valhalla – unlike the 2019 concept – is not powered by a bespoke, Aston Martin-developed V6, as was originally planned. Development of that 3.0-litre motor, which was set to exceed the 725hp output of even the DBS Superleggera's V12, was axed soon after Moers took over because, he said, it would not have been Euro 7 compliant and "would have taken another huge investment that was really too big to bring to life".

Instead, the Valhalla follows Aston's Vantage and DB11 coupés in adopting a powertrain supplied by technical partner Mercedes-Benz; more specifically, the AMG performance division's twin-turbocharged 4.0-litre V8, which in this application produces some 750hp, revs to 7,200rpm and drives the rear axle through an all-new, bespoke, 8-speed dual-clutch gearbox, which will also be used on other future Aston Martin models.

Like AMG's new GT Black Series, the Valhalla's V8 features a flat-plane crank and is said to be "the most advanced, responsive and highest-performing V8 engine ever fitted to an Aston Martin". It also breathes through a lightweight exhaust system that exits through the top of the rear deck and contains adjustable flaps that give "an authentic Aston Martin sound character".

Where the Valhalla most obviously differs, technically, from Aston's current crop of sportscars is in the adoption of a pair of electric motors, one on the rear axle just behind the mid-mounted V8 and another at the front – combining to produce 204hp and endowing the Valhalla with a total of 950hp – only 36hp less than the similarly conceived Ferrari SF90 Stradale, its closest rival. Aston reckons this is sufficient for a 0-100kph time of 2.5sec, a top speed of 330kph and, crucially, a targeted record-breaking Nürburgring lap time of 6min 30sec.

Like the SF90, the Valhalla uses only its front electric motor to drive in pure EV mode, which it can do for 15km and at speeds of up to 130kph, but in normal driving situations, electric power is split across both axles as needed to supplement the V8's output. It reverses exclusively in electric mode, too, saving weight by negating the need for a conventional reverse gear in the 8-speed DCT, which has been fitted with an electronic limited-slip differential to improve traction and agility, and can offer up two gears at once to allow the EV and combustion motors to operate in tandem.

Housing the all-new powertrain is a bespoke carbon-fibre tub that gives "maximum stiffness with minimum weight penalty". A targeted dry weight of 1,550kg will give the Valhalla "an unrivalled power-to-weight ratio compared to its class rivals", said Aston Martin, while aerodynamic-enhancing bodywork elements – including huge venturi channels underneath and an active front splitter and rear wing – inspired by the Valkyrie's F1-style set-up are claimed to generate 600kg of downforce at 241kph.

Pushrod suspension features at the front and a multi-link set-up at the rear, with dampers and springs mounted inboard to reduce unsprung mass. The entire set-up is stiffened and “dramatically” lowered in Track mode and can be raised at low speed to clear speed bumps.

By using more subtle bodywork elements to enhance downforce, Aston Martin's designers were given freer rein for the overall silhouette, without the need for such dramatic wings, intakes and outlets as on the Valkyrie. The design is much cleaner, more overtly road-focused and extensively altered from that of the concept.

The prominent roof scoop, forward-hinged dihedral doors, swooping rear deck and one-piece rear wing remain, but a completely new treatment for the front, rear and side bring the supercar into line with its more mainstream siblings. A wraparound version of Aston's trademark grille features at the front, for example, below larger, rounder matrix LED headlights, while the rear diffuser has been heavily toned down for a more production-friendly set-up. There is a more angular-looking side skirt, too, sharper side vent designs and, obviously, wing mirrors, which were absent from the show car. The production-spec wheels, meanwhile, measure 20 inches in diameter at the front and 21 inches at the rear, and are wrapped in Michelin Pilot Sport Cup tyres.

Chief creative officer Marek Reichman explained how the Valhalla’s different positioning from the Valkyrie necessitated a unique design approach: “When we created the Valhalla concept, we were keen to emphasise the design legacy of the Aston Martin Valkyrie and that intent remains unchanged, but the execution has evolved considerably in order to reach production of this all-new car. Though the legacy of Valkyrie is clear, Valhalla is now a more mature, fully resolved piece of design.”

It promises to be a similar story inside. Aston Martin has yet to show the production-spec cabin but claims the Valhalla will offer a “pared back cockpit design with clear, simple ergonomics unashamedly focused around the driver”. It will be more spacious than the Valkyrie, with additions such as an infotainment touchscreen with Apple CarPlay and Android Auto, dual-zone air conditioning, a rear-view camera and a raft of advanced driver aids strengthening its on-road credentials.

The Valhalla will now be prepared for a market launch in the second-half of 2023, with Aston Martin F1 drivers Sebastian Vettel and Lance Stroll called upon to offer feedback on the car’s dynamic performance.

Prices and availability are yet to be announced, but Reichman said at the Geneva show concept’s unveiling: “If the Valkyrie is the best of the best, then the Valhalla is the best at £1m (around Rs 10.32 crore)”. Earlier this year, chief financial officer Kenneth Gregor confirmed that Valhalla deposits made up “a chunk” of Aston’s £296 million (around Rs 3,054 crore) deposit balance in 2020.

The British marque launched the new Vantage in India back in 2018, with prices starting at Rs 2.95 crore. More recently, the brand’s first SUV – the Aston Martin DBX – was launched in India, with a starting price of Rs 3.82 crore. Aston Martin’s India range also includes the DB11.