Called the Jimny Sierra ‘Pickup Style’, no plans have been announced to put the concept into production. 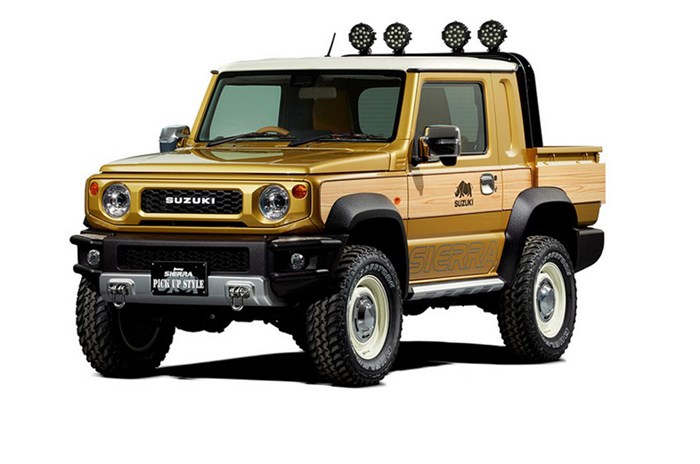 Suzuki has announced that it will showcase the Jimny Sierra ‘Pickup Style’ concept at the Tokyo Auto Salon, which will be held at the Makuhari Messe convention centre in Japan from January 11-13, 2019.

An image released by Suzuki shows the Sierra Pickup concept painted in a striking gold colour, with a contrasting off-white roof. It also features two towing hooks on the front bumper, retro wheels with Bridgestone Dueler all-season tyres, new skid plates and distinct off-road lights mounted on a rack. It also gets a unique wood panel on the sides, similar to that of the iconic 1972 Jeep Wagoneer. The wood panel on the Jimny pickup features the logo of the Suzuki Rhino Club – the brand’s rhino conservation initiative.

Suzuki says that the concept is “designed to appeal people with DIY and other hobbies.” At the moment, no other pictures have been revealed to show the Pickup Style’s exterior or interior from other angles. However, from the current image, we can see that the concept car has brown colour interior.

The Pickup Style concept is based on the same platform as the Suzuki Jimny Sierra SUV, which measures 3,550 mm in length, 1,645 mm in width and 1,730 mm in height. The engine present in the SUV is the 1.5-litre, four-cylinder, naturally aspirated petrol unit that produces 102hp at 6,000rpm and 130Nm of torque at 4,000rpm. It is mated to either a 5-speed manual or a 4-speed automatic gearbox and gets a part-time 4WD system as standard.

The current Jimny SUV has seen a huge influx of demand, with the waiting period is stretching up to a year in many countries. However, there are no plans to bring either the Pickup Style or the regular Jimny SUV to India any time soon.