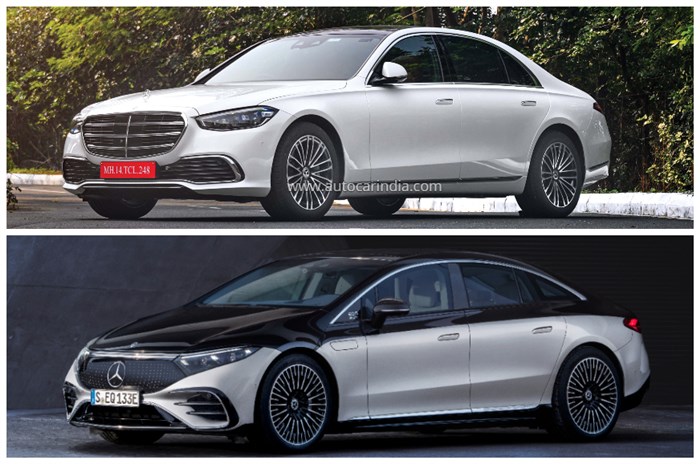 As an exception, the S-class will be available in petrol, diesel and electric (EQS) avatars.

Mercedes-Benz India launched the all-electric EQC SUV in 2020, and the carmaker is set to follow it up with the locally assembled EQS sedan later this year. As it expands its EV portfolio, Mercedes is rethinking its future strategy for petrol and diesel. Commenting on the topic, Martin Schwenk, MD and CEO, Mercedes-Benz India, told Autocar India in an interview that the automaker will "streamline drivetrains" when it gets more electric cars. "In five years, will we offer all three options – electric, diesel and petrol – on a car? I think, no," he added.

For now, Mercedes has an extensive internal combustion engine (ICE) line-up in the country. It offers a choice between petrol and diesel on most of its cars, with the diesel-only CLS and the petrol-only AMG performance vehicles and Maybach super-luxury cars being the exceptions.

Currently, the GLC (along with the EQC) is the only vehicle class in Mercedes’ portfolio to be offered with petrol, diesel and electric powertrains. Later this year, the S-Class and EQS combine will boast of a similar feat.

However, as the marque electrifies more of its range over the coming years, expect it to start limiting the number of ICE alternatives of its EV models. Elaborating further, Schwenk mentioned, “People have different aspirations about what they want to drive, in the North and South (India), as well as in the metros and Tier 2 and 3 cities. So, we will have to see which combination of powertrains – petrol and electric, or diesel and electric – will work for which models.”

Last year, Mercedes announced a major shift towards electrification for global markets in the times to come. The company will offer a battery-electric vehicle in all segments from 2022, and from 2025, it promises to offer an EV option for all its models. By 2030, the German marque plans to go all-electric "where market conditions allow”.

While Mercedes is not expected to completely withdraw its combustion engine range from India anytime soon, expect the current, almost universal choice between petrol and diesel across its ‘regular’ models to end, as it ramps up focus on electrification. “But these discussion are still some time away,” cautioned Schwenk.

He elaborated, “We all know the development and the adoption (of EVs) in India will depend on many factors, like infrastructure, government regulations and incentives, tax structures and so on.” And though EV adoption and sales have spiked in recent times, the increase is on a very small base.

What could, however, provide an impetus is a reduction in taxes on EVs, believes Schwenk. “The reduction of (import) duties (on EVs) will help to develop (sales) volume, and if we get to reasonably big volumes, we will localise (more).”

The likes of Tesla too have been batting for lower import duties on EVs, though the government is yet to make a concrete move on the issue. If the tax cut does happen, Schwenk mentioned that it will make him “open the door for additional (all-electric) products.”

The prospect of Mercedes India lowering focus on some of its combustion engine models in a few years might seem like a strong move, however, it is also a logical one.

Mercedes-Benz India announced sales of 11,242 cars in 2021, which is a 42 percent rise over the subdued numbers from a year before. However, the company is yet to surpass its 2018 record of 15,538 cars. Even the overall luxury car segment has remained limited over the past few years, accounting for just 1-1.5 percent of the overall passenger vehicle market in the country.

And then there is the challenge of meeting the ever tightening emissions regulations. The CAFE 2 (Corporate Average Fuel Economy) deadline is set for April this year, with the RDE (Real Driving Emissions) rules slated to come into effect in 2023. Further emission curbs down the line are expected to not only substantially increase ICE vehicle prices, but also require considerable R&D efforts.

With sales constraints and a high cost of cleaning up tailpipe emissions, then, rationalising its combustion engine portfolio seems to be an inevitable decision for Mercedes India.

What do you think about Mercedes potentially discontinuing some of its petrol and diesel powertrains in the future? Let us know in the comments below.