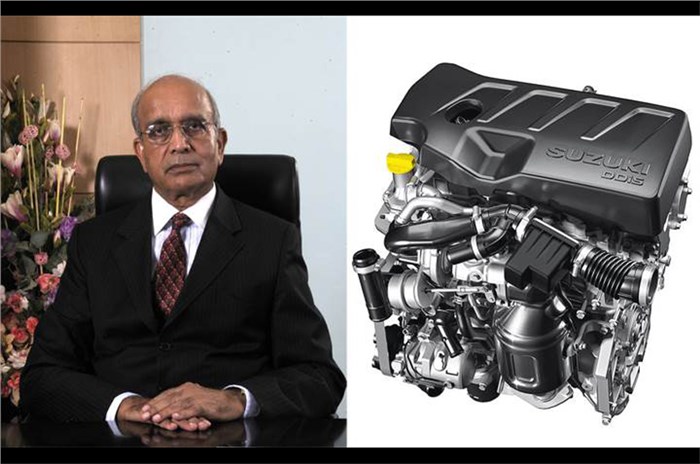 As we had reported previously, Maruti Suzuki will stop selling diesel vehicles in the Indian market before April 1, 2020, a day before the Bharat Stage VI (BS-VI) emission norm are set to begin. While company chairman R C Bhargava reiterated this point, he also said Maruti Suzuki diesels may still be available in the market, provided a fair number of customers opt for the fuel, and at a price that includes the cost impact of upgrading to BS-VI technology.

“It (Maruti Suzuki’s presence in the diesel segment) will depend on customer acceptability. It will be the customer's choice, not the OEM's choice," Bhargava told our sister publication, Autocar Professional. All of Maruti Suzuki's diesel models, barring the Ciaz, are powered by an FCA-sourced 1.3-litre diesel engine. The Ciaz midsize sedan was the first Maruti car to get the in-house-developed 1.5-litre diesel engine. This engine will make a comeback in the BS-VI era if customers approve of the cleaner but costlier BS-VI version.

In FY2018-19, all diesel variants of Maruti Suzuki models together contributed close to a fourth of the OEM's total sales. For the industry, it would be a little more. Wouldn't it be a risk to fully exit the diesel segment? Bhargava doesn't think so. He says, “Eight years ago, we (Maruti Suzuki) were a petrol-only carmaker. The market shift towards diesel forced us to enter the diesel segment.”

Now, the reverse global trend and the technology cost impact affecting affordability in the mainstream market do not make a compelling reason to have a presence in the diesel segment. However, Maruti Suzuki will export diesel vehicles in markets that have emission norms that are BS-IV equivalent or lower. “We will export to markets where there are no legal hurdles,” says Bhargava.

Super Carry only in CNG and petrol from April 2020

In the commercial vehicle space, it’s a similar story for Maruti Suzuki. Bhargava confirmed that his company's sole commercial vehicle – the Super Carry – will cease to have a diesel option. From April 1, 2020, the small truck will be available only in CNG and petrol versions.

Along with all these BS-VI-related developments, Maruti Suzuki is also busy preparing its electric mobility strategy. Its first electric vehicle, the Wagon R EV, is slated to hit the roads next year.

New Maruti Suzuki Alto 800 facelift: All you need to know