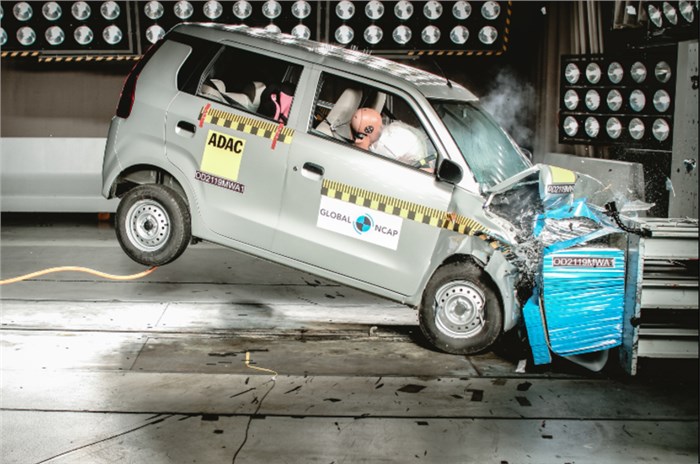 In the latest round of crash tests under its #SaferCarsForIndia campaign, Global NCAP tested four cars sold in our market, and the Maruti Suzuki Wagon R was part of the list. The brand-new Wagon R – which was launched at the start of 2019 and is one of the highest-selling models in India – has received a lowly two-star rating in the Global NCAP crash test.

The low score for child occupant protection is attributed to the fact that the child restraint system broke on impact, resulting in the 3-year-old child dummy’s head hitting the front seat. And while head protection for the 18-month-old child dummy is rated ‘good’, protection for its chest is rated ‘vulnerable’ despite the child restraint system being installed rearward-facing. The report also notes the fact that the Wagon R does not offer a three-point seatbelt for the middle-seat passenger and does not have Isofix anchorages either. 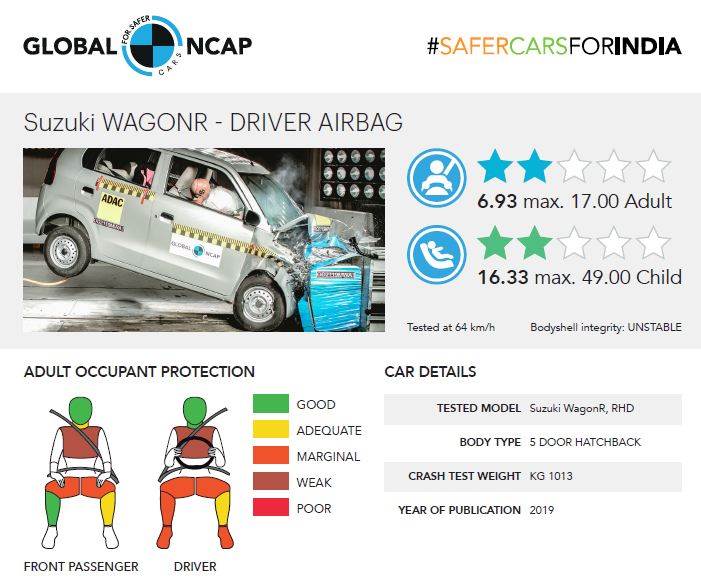 Regulations in India currently only mandate the fitment of a driver-side airbag, which is why the Wagon R – and a number of other entry-level hatchbacks – presently get a single airbag on the entry-level variant.

This, however, is set to change soon, with a Supreme Court panel directing the Ministry of Road Transport and Highways to ensure the passenger-side airbag is made mandatory as well.

It’s worth noting that the Maruti Suzuki Wagon R 1.0 LXi that Global NCAP tested is priced at Rs 4.34 lakh, and for an extra Rs 7,000, buyers can get the 1.0 LXi (O), which comes with a passenger-side airbag.

Additionally, the Wagon R meets Indian crash-test standards, which subject cars to a front offset crash at a lower speed of 56kph, as compared to the Global NCAP crash test, which is conducted at a speed of 64kph.