Carmaker plans to introduce the model in other African and ASEAN markets in the coming months. 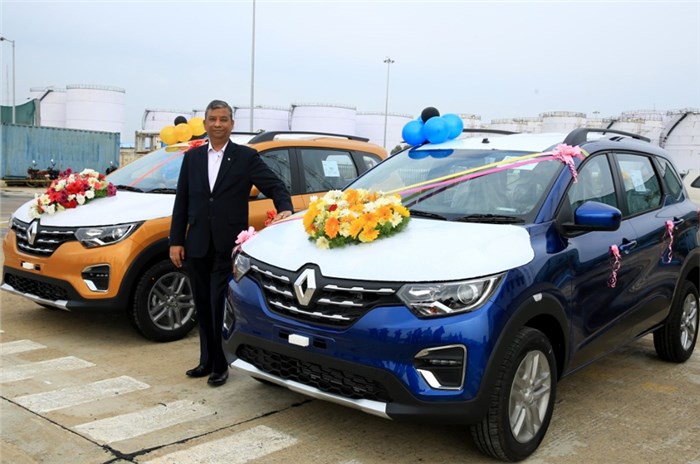 Renault has launched the made-in-India Triber in South Africa, with the carmaker having exported the first batch of the car to the country in late December 2019. The Triber is the second model built on the CMF architecture to be exported from India, with the Kwid also being shipped to some international markets.

Speaking to us about the model’s introduction in South Africa, Venkatram Mamillapalle, country CEO and managing director, Renault India operations said, “The (South) African team is planning to sell about 200 units a month. We think it’ll enhance further and we are currently capacitising for all the markets in India, from March onwards. About 20 percent additional volume based on what we foresee the exports.”

Mamillapalle further added that he foresaw better prospects for the model in its first year of sale in South Africa, “So my best estimate is even though the people here in South Africa are saying 200 (units), I'm sure with the product acceptance and reception it’ll go much higher, so we’ve got to prepare for that and this year I would say that we should touch at least 3,000 exports to South Africa.”

Aside from the South African market – the first market outside India to receive the Triber – Renault has also revealed its intention to export the Triber to other markets. “We will continue this growth momentum and foresee potential growth and high demand from other African markets and ASEAN and SAARC countries,” Mamillapalle revealed in an official statement.

Built on Renault’s CMF platform, the Triber is unique in the sense that it offers seating for up to seven in a body measuring under four metres in length – the only other model in this segment is the Datsun Go+. The model comes well-equipped, especially in its top trim level that gets an 8.0-inch touchscreen infotainment system, all-LED instrument cluster, AC vents in all three rows, keyless entry-and-go, projector headlamps and a rear wash-wipe are all part of the standard package. Additionally, the third row of seats can be removed and stored away to increase storage space in the boot.

Powering the Triber is Renault’s 1.0-litre, three-cylinder engine that makes 72hp and 96Nm of torque in the Indian market. This unit is paired with a 5-speed manual gearbox as standard. There is an AMT-equipped version that'll arrive soon (it was showcased at Auto Expo 2020) and a more powerful version with a turbo-petrol engine.

The Triber is manufactured at the Renault-Nissan Alliance’s plant in Oragadam, Chennai.