Upcoming Kia compact SUV to share underpinnings with the Hyundai Venue, but will get unique exterior and interior design. 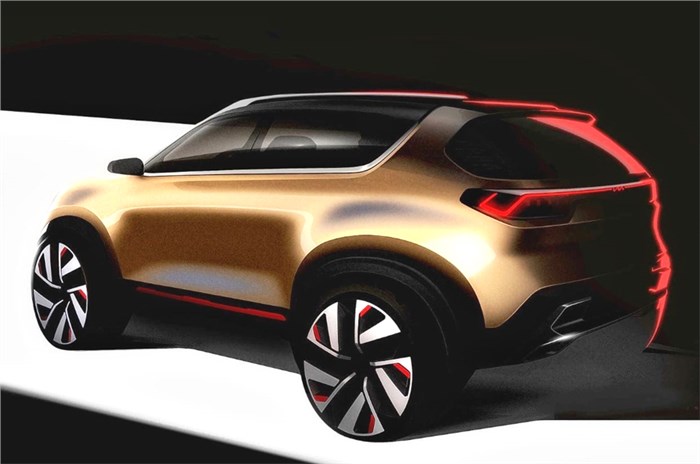 Kia Motors India has released the first set of teasers for its upcoming compact SUV concept that will have its world premiere at Auto Expo 2020. The compact SUV, which will launch sometime during the festive season later this year, will be Kia’s smallest model in India.

Internally known as QYi, the new compact SUV will be under four metres in length and will be Kia’s answer to the Hyundai Venue, Maruti Vitara Brezza petrol, Ford Ecosport, the recently updated Tata Nexon and the Mahindra XUV300

The new Kia compact SUV will share its underpinnings with the Hyundai Venue, but as seen in the teaser, it will sport a unique exterior and interior design. At the front, it gets the signature Kia Tiger nose grille with honeycomb inserts, while the front bumper has a muscular look, with a wide air dam and vertical air dams on each side. There's a standard headlight setup instead of the Venue’s split headlight design but gets unique vents below the headlamp that add to its sporty looks. The headlight design looks sharp, with LED daytime-running lamps, at least on the higher variants. It also features matte-silver-finished fog lamp inserts.

From the side, you notice it has a flat-ish bonnet and chunky squarish wheel arches with black cladding running across the length of the car. The alloy wheels seem to sport a diamond-cut finish but the final car could get units larger than the 16-inchers on the concept.  The concept’s window line rises just aft of the rear door giving it a crossover-like look, while the roofline tapers down slightly and merges neatly with the rear glass.

Moving to the back, the Kia QYi concept gets a floating D-pillar with a wide rear glasshouse. The teasers also reveal that the compact SUV will come with roof rails and a small rear spoiler. The tail-lamps are placed horizontally and are connected by an LED strip, while the bumper gets large black inserts with matte-silver bits that beef up its SUV looks. There aren’t any details about the QYi SUV’s interior as of now, but we expect Kia to offer a few glimpses before the 2020 Auto Expo premiere.

Expect the production-spec Kia QYi SUV to come with a 1.5-litre BS6 turbo-diesel, a 1.2 petrol, and a 1.0-litre turbo-petrol engine, similar to the Venue's line-up.

Apart from the QYi SUV concept, Kia will also showcase the recently launched Carnival and a few other concepts at the Auto Expo which will start on February 5, 2020.