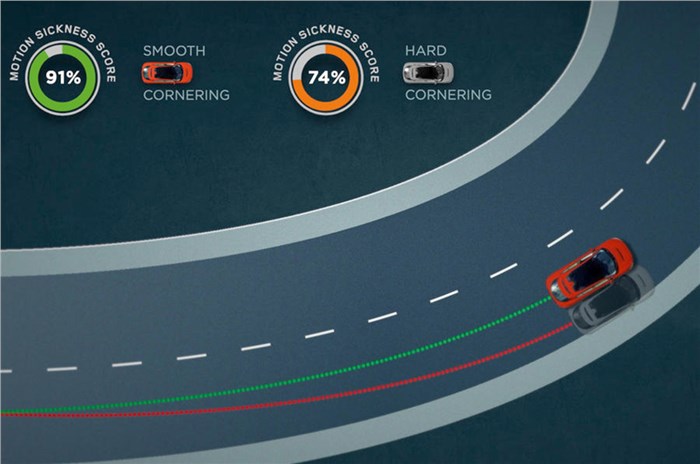 Jaguar Land Rover (JLR) is developing new technology that aims to reduce the chances of motion sickness in passengers of self-driving cars.

How does the system work?

The system is based on software that uses biometric sensors to detect how susceptible individual drivers and passengers are to getting car sick. This data is then used by the system to find the ideal acceleration, braking and lane positioning to reduce chances of motion sickness in passengers by up to 60 percent; the autonomous car then adjusts its driving style accordingly.

Will it make it into production cars?

JLR has revealed that it has fine-tuned the software over 32,000-plus km in the real-world, as well as in virtual simulations, using its autonomous fleet. The system is expected to be integrated into the company’s future production cars, as driver assist technology develops. Although JLR refused to comment on future product plans, a spokesperson said that the system's principles "can be applied to any vehicle with increased levels of automation".

JLR’s chief medical officer, Dr Steve Iley, said: “Mobility is rapidly changing, and we will need to harness the power of self-driving vehicles to achieve our goal of zero accidents and zero congestion.”

“Solving the problem of motion sickness in driverless cars is the key to unlocking the huge potential of this technology for passengers, who will be able to use the travelling time for reading, working or relaxing.”

What are JLR’s plans for India?

Moving to the Indian market, Jaguar Land Rover is presently looking to expand its diesel line-up, which consists two models from Land Rover – the Discovery Sport facelift and the new Range Rover Evoque. The company’s entire Jaguar line-up is presently petrol-only. The carmaker is also gearing up to launch its all-electric SUV, the Jaguar I-Pace, in India.