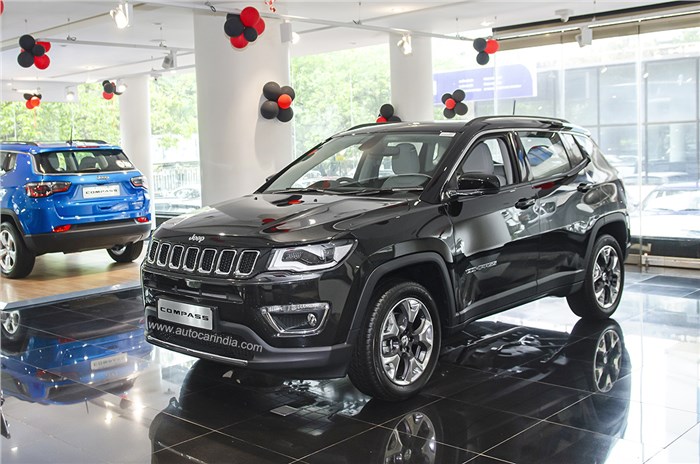 The Jeep Compass can be had with discounts and benefits of up to Rs 2 lakh, depending on the model selected. The carmaker is also offering a range of finance and EMI schemes on its popular SUV for easier ownership.

What are the benefits available?

The off-road-focused Compass Trailhawk is offered with the highest benefits – up to Rs 2 lakh – while the regular variants of the Compass can be had with discounts and benefits of up to Rs 80,000.

The discounts, though, could vary based on location and dealership. The carmaker is additionally offering the SUV with a variety of financing schemes for easier ownership.

Customers can avail of up to 100 percent on-road financing without the need to make an initial down payment. Additionally, there are a host of EMI schemes, including paying 50 percent less EMI for three consecutive months in a year, and a hybrid scheme that combines the benefits of two separate EMI schemes in one.

A brief recap of the Jeep Compass

Launched in 2017, the Compass is Jeep’s sole made-in-India product, and retails alongside the company’s CBU models, the Wrangler and the Grand Cherokee. The Compass was initially available with a 1.4-litre turbo-petrol engine offered with either a manual or DCT gearbox and a 2.0-litre diesel engine available solely with a manual.

In 2019, Jeep expanded the Compass line-up with the Trailhawk, which introduced a BS6-compliant diesel engine, a 9-speed automatic gearbox and enhancements to the bodywork and AWD system to help it perform better off road. The diesel-automatic combination also filtered down to the standard Compass earlier this year.

What’s to come from Jeep?

Jeep is expected to introduce a host of new models in India in the coming years, the first of which is expected to be the Compass facelift in early 2021. Also expected in 2021 is the company’s Compass-based three-row ‘D-SUV’. A sub-four metre SUV is also expected, but only in 2022.

The carmaker is also expected to bring in two additional models in 2021, one likely to be the all-new Grand Cherokee SUV.