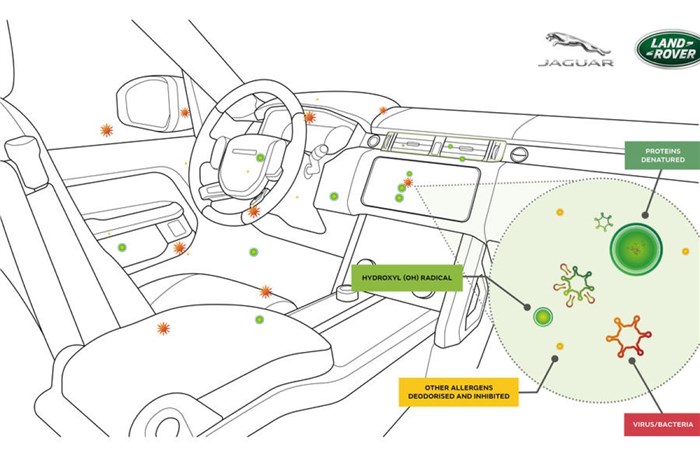 Jaguar Land Rover (JLR) has revealed a cabin air purification system for use on its future road cars that inhibits viruses and bacteria by up to 97 percent, including Covid-19.

The system, which is currently in its prototype phase, pairs traditional heating, ventilation and air conditioning systems with Panasonic’s Nanoe X device, a purifier that uses chemicals in water droplets to neutralise viruses.

In lab tests, Nanoe X has been shown to inhibit Covid-19 by almost 100 percent. A recent test by research organisation, Texcell, found the Nanoe X inhibited more than 99.995 percent of the virus during a two-hour test.

During a test run by JLR and virology lab, Perfectus Biomed, JLR’s Nanoe X-equipped climate control system inhibited viruses and bacteria, including Covid-19, by up to 97 percent.

JLR research engineer Alexander Owen said, “Hydroxyl radicals are one of the most important natural oxidants in chemistry and have been helping to clean our atmosphere for millennia, removing pollutants and other harmful substances.”

“The creation of this technology and our advanced research is the first step in deploying this scientific phenomenon within vehicle cabins of the future,” he added.

JLR hasn't yet confirmed when the technology will be commercialised or which production models will be the first to receive the system.

Currently, JLR models, including the Jaguar I-Pace EV and the Range Rover Evoque, are fitted with Panasonic’s existing Nanoe air purification technology, over which the latest system is said to be ten times more effective.

JLR isn't the only company to be working on antivirus technology for cars. In response to the Covid-19 outbreak last year, UFI Filters, an Italian car part maker, launched an antivirus cabin filter in India.

Made up of silver- and copper ion-treated fibres, the Sofima D+fend system is claimed to kill 99.5 percent of viruses from the coronavirus family.

Jaguar India is set to launch the I-Pace EV on March 23, while Land Rover recently added a new powertrain option to the Defender’s India line-up.