New City for India will be longer than the Thai-spec car; likely to have more ground clearance and be heavier too. 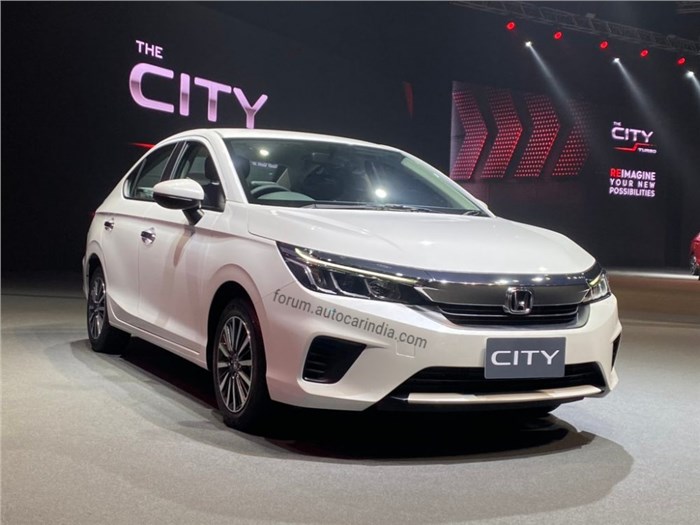 Ahead of its official unveil on March 16, a few new details of the India-spec 2020 Honda City have surfaced online. We had reported a few weeks ago that the new City for India will get country-specific changes as far as interior bits and features go. New details now confirm that Honda Car India has made changes to the upcoming City’s dimensions too, keeping Indian customers in mind.

In terms its size, the new India-spec City measures 4,549mm in length, 1,748mm in width, 1,489mm in height, and has a 2,600mm long wheelbase – the fifth-gen City is longer and wider than the outgoing model currently on sale but has the same wheelbase length. Interestingly, the new Honda City sold in Thailand has a wheelbase that is 11mm shorter than the one that’s headed to a Honda showroom near you, which means the next-gen City for India could have more legroom for the second row, thanks to the longer wheelbase. The all-new India-spec City will also have a higher ground clearance to suit Indian roads and be a bit heavier than the outgoing car.

The new City will continue to utilise its predecessor’s BS6-compliant 119hp, 1.5-litre petrol engine, at least initially. This engine is expected to be offered with 5-speed manual and CVT automatic gearbox options. There will be a BS6-compliant diesel too – the 100hp, 1.5-litre powerplant has already made its debut on the Amaze. Additionally, Honda will also add a 1.5-litre petrol with mild-hybrid tech to the City line-up, sometime down the line.

The new City is expected be available in three petrol-manual variants – V, VX and ZX. The top-spec ZX trim is expected to get features such as full LED lighting, a sunroof and 16-inch alloy wheels.

More details about the all-new City will be revealed at its official unveil in a few days, though the launch of the fifth-generation Honda City is slated to take place in April this year. When new City prices are revealed, it will compete with the upcoming Hyundai Verna facelift, the Maruti Suzuki Ciaz, the Toyota Yaris and the new 1.0 TSI-equipped Volkswagen Vento and Skoda Rapid.