Buyers of the Hyundai Venue compact SUV will get to choose from a total of four engine-gearbox options; only 1.0-litre turbo-petrol to get an automatic gearbox at launch. 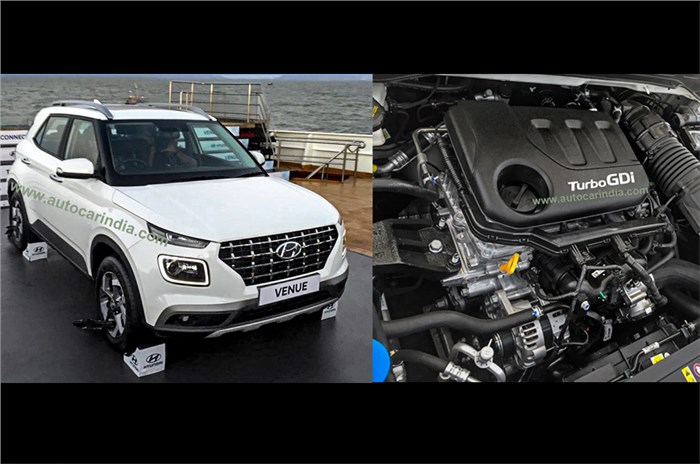 The hype surrounding the Hyundai Venue is real. Known for the longest time by its codename QXi, the Venue is one of the most-anticipated launches of 2019, and why shouldn’t it be – it is Hyundai’s first-ever compact SUV that’s about to set foot into what is possibly the hottest segment today in India’s passenger vehicle market. There has been a lot of talk about its name, about the bucketful of connectivity features it will offer, but now, it’s time to look at the aspect that matters the most once you get behind the wheel – the engine and gearbox. In this piece, we’ll tell you all you need to know about the Hyundai Venue’s engine and gearbox options.

In total, the Hyundai Venue will get three engine options – two petrols and one diesel. The highlight of the engine range is the 1.0-litre, three-cylinder, direct-injection turbocharged T-GDI Kappa engine that debuts in India on the Venue. The 1.0-litre turbo-petrol engine puts out 120hp and 172Nm of torque, which is 10hp more than the petrol-engined Tata Nexon and Mahindra XUV300, and interestingly enough, 21Nm more than even the Hyundai Creta’s 1.4-litre petrol. That said, it’s 5hp down on the Ford EcoSport’s 1.0-litre EcoBoost unit, and 28Nm down on the XUV300’s 1.2-litre turbo-petrol.

Another draw with the Hyundai Venue’s 1.0-litre turbo-petrol engine will be the option of a 7-speed, dual-clutch gearbox (the only DCT in the compact SUV segment), in addition to the standard 6-speed manual unit. That said, it’s the only engine on the Venue that gets the option of an automatic gearbox.

Aiming for an attractive starting price, Hyundai has also given the Venue an option of a naturally aspirated petrol engine. It’s the same 1.2-litre, four-cylinder engine as seen on the Hyundai i20, and in the Venue, it makes an identical 83hp and 115Nm of torque. On paper, this engine is significantly less powerful than those available with any other compact SUV, and can only be had with a 5-speed manual gearbox.

Once again, the Hyundai Venue’s diesel engine is the one we’re familiar with. It’s the same 1.4-litre, four-cylinder unit that’s seen in the Hyundai Verna and Creta, and produces an equally familiar 90hp and 220Nm of torque. In terms of outright power, this engine matches the Maruti Suzuki Vitara Brezza’s 1.3-litre DDiS unit, which will eventually be replaced by the new, more powerful 1.5-litre engine. Torque-wise, it enjoys an advantage over the Vitara Brezza and Ford EcoSport diesel, but is significantly less powerful than the Nexon’s 1.5-litre diesel (110hp and 260Nm) and XUV300’s class-leading 1.5-litre diesel (117hp and 300Nm).

Unlike its wildly popular sibling, the Creta, the Hyundai Venue won’t get a diesel-automatic combo at launch. For now, the only gearbox available with the Venue diesel will be a 6-speed manual. This could prove to be a bit of a letdown for those looking for the convenience of a diesel-automatic, and could play into the hands of the Vitara Brezza and Nexon, both of which get an AMT option for the diesel variants.

Another thing that potential buyers would want to know is the Venue’s fuel efficiency, but they’ll have to wait for it because Hyundai says ARAI certification for the engines is awaited. For now, we can tell you the Venue’s mileage per litre figures should be in the range of 16-18kpl for the 1.2-litre petrol variant, and 20-22kpl for the 1.4-litre diesel. These should put the Hyundai Venue’s fuel efficiency figures on par with most of its compact SUV rivals, barring the Vitara Brezza, which, with a certified efficiency figure of 24.3kpl, continues to lead on this front.

The Hyundai Venue’s launch will take place on May 21, 2019. Right from the time it enters the market, the Venue’s rivals – the Maruti Suzuki Vitara Brezza, Tata Nexon, Ford EcoSport and the Mahindra XUV300 – will give it stiff competition. The Hyundai Venue’s price is expected to range from Rs 8-12 lakh (ex-showroom).

How do you feel about the engine-gearbox options on offer with the Venue? Let us know in the comments.