While Hyundai has not confirmed a future Ioniq 6 N, the concept shown here is based on the standard Ioniq 6 that was revealed recently. Hyundai calls the RN series "rolling lab concepts". They don’t necessarily preview production cars but rather serve as development platforms that prove and refine new technology, as well as explore future styling. The RN22e follows the RM20e and RM19, which used Hyundai Veloster bodyshells to develop electric drivetrains and mid-engined layouts, respectively.

The RN22e is the closest RN to a potential production car so far, taking the Ioniq 6 sedan and adding deeper air dams, diffusers, a different spoiler, larger wheels and wider arches, thereby giving it a more aggressive stance. Rather than confirming the Ioniq 6 N, its styling serves more to gauge interest for such a model.

Hyundai RN22e concept: under the skin

It will be going out on track to develop new ways of injecting engagement into electric performance cars and avoid them feeling simply like faster versions of standard EVs. During the car’s presentation, Hyundai acknowledged the challenges of achieving this differentiation. As such, the RN22e explores ways of reducing weight, compensating for the lack of engine noise and making EVs stand up to extended track driving.

The main weapon in the RN22e’s dynamic armoury is its torque-vectoring capability. Although it has only one motor on each axle (unlike cars such as the Audi E-tron S and Hummer EV), it achieves the effect of overpowering the outside driven wheels using a clutch pack. 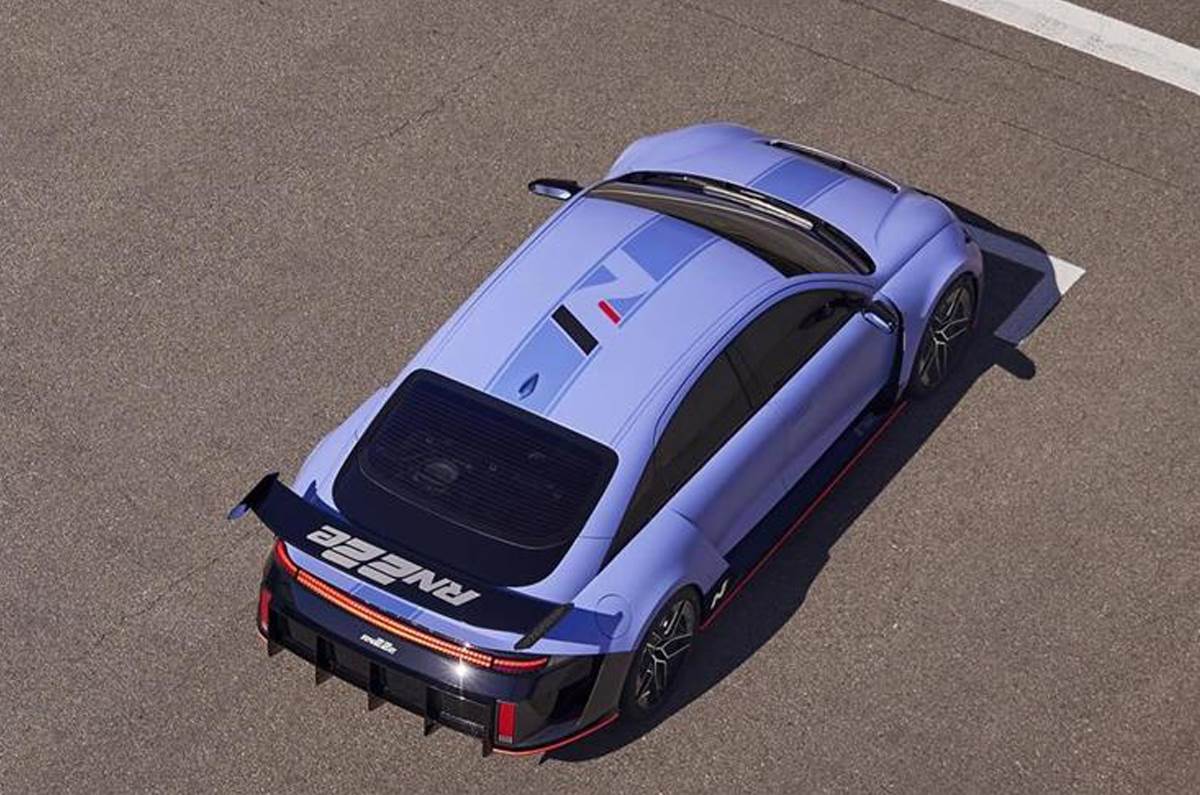 The RN22e has two motors that give it four-wheel drive (offering up the same 585hp as the related Kia EV6 GT, also sold in India), which the N division is putting to good use by letting the driver choose the torque split between the front and the rear axles. Every other EV so far has either managed this automatically or had a fixed split. Such a setting should inject some much-needed predictable playfulness into a driver’s EV. The ultimate expression of the combination of torque-vectoring and a variable torque split is a drift mode, a feature which will be present in next year’s Ioniq 5 N. Hyundai claims the one-off track car will top out at north of 250kph. The EV6 GT – taller, less slippery and no doubt weightier – can crack 260kph.

The test bed also serves to explore improved braking for EVs. While regenerative braking means that disc brakes on EVs tend not to come under a lot of stress on the road, the weight of the battery pack can cause an EV to run out of braking power quite quickly under repeated heavy stress on a track. Hyundai is therefore experimenting with a 400mm hybrid-metal disc.

Finally, the RN22 pipes sound through the interior speakers, as well as a set of exterior units, to give the car a unique sound signature.

Going even further into the territory of synthetic throwbacks to piston-engined performance cars, the motor control software can simulate the jerk of gear changes. The RN22e is joined by the N Vision 74 concept, which was also showcased at the Busan Motor show. Read more on that here.