New SUV set to be Hyundai's first all-electric offering for India; company aiming to locally assemble it and price it at Rs 25 lakh 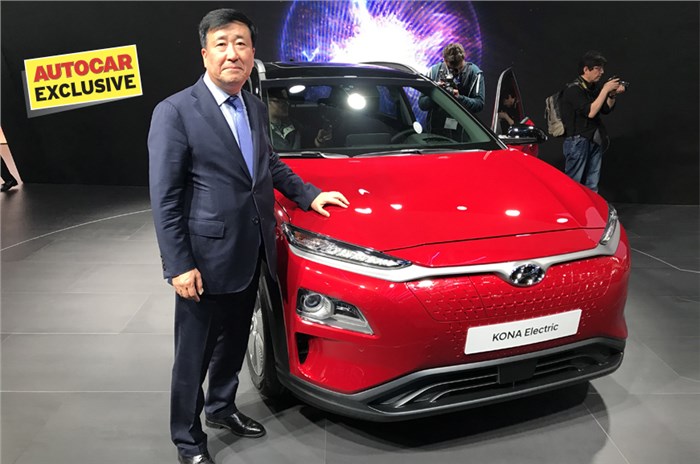 Unveiled at the ongoing Geneva motor show, the Kona Electric is only the second EV in Hyundai's global line-up. And while we'd told you about Hyundai's plan to bring it to our shores last year, now, we have confirmation that the company is indeed intending to launch it in India by the middle of 2019.

Speaking on the sidelines of the Geneva show, YK Koo, MD and CEO, Hyundai India, confirmed the news to Autocar India.

"We are not looking at big sales numbers with the Kona, but we want to make a technology statement and show our commitment to an EV future", said Koo.

In addition, Hyundai isn’t considering hybrids as a stop gap measure on the path to electrification.

“Since there are no tax incentives for hybrids, we are looking at concentrating our efforts on pure EVs”, added Koo.

Hyundai is planning to locally assemble the Kona Electric and price it close to the Rs 25 lakh mark. The company aims to sell around 50-60 units of the Kona on a monthly basis.

The Kona EV that will be introduced in India is the version with 300 kilometres of range from a 39.2kWh battery pack. The electric motor develops 134hp and 395Nm of torque, and blesses the Kona with a 0 to 100kph time of 9.7sec, while top speed is pegged at 155kph.

The Kona Electric’s lithium ion battery pack can be charged in as little as 54min to 80 percent capacity from a 100kW fast charger, or 6hr 10min from a standard AC source.

Hyundai claims that the car’s battery pack is integrated into the Kona’s platform without encroaching upon interior space, meaning the regular Kona’s luggage space is unchanged. Without the charge cable, the Kona Electric provides 373 litres, falling to 332 with the cable stowed. There’s additional storage space in the front of the car.

On the outside, it’s similarly styled to the regular Kona, but has a closed grille and no exhausts, while the 17-inch alloys are exclusive to the electric Kona. The bumpers and spoiler are tweaked for aerodynamics. Inside, there’s a digital dashboard, head-up display and 7.0-inch infotainment touchscreen, with the option of an upgraded 8.0-inch unit. The front seats are heated and ventilated, as well as eight-way electrically adjustable.