We compare the Hyundai Casper against the upcoming Tata Punch and Maruti Ignis, to see which is the best, on paper. 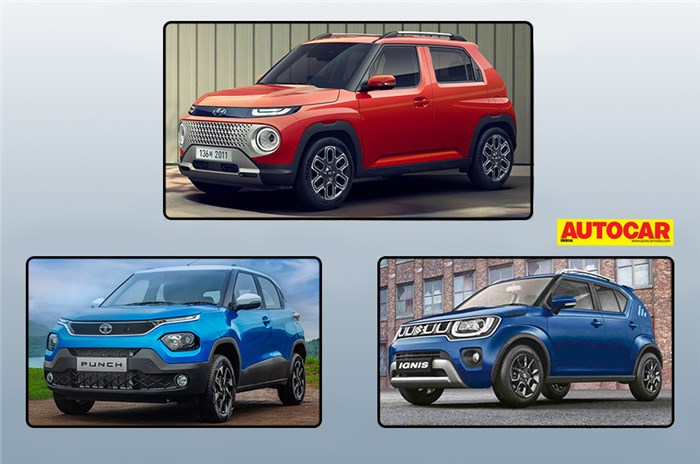 The Hyundai Casper micro-SUV has just been officially unveiled internationally, ahead of its launch in South Korea. Hyundai is expected to bring its smallest SUV offering, the Casper, to India and it will sit below the Venue. There are talks that the Casper could get a different name in India. However, Hyundai is not the only carmaker entering the micro-SUV space in India, as Tata has also unveiled the Punch, its offering for the segment, that will launch in the coming months. Both these models will also face competition from the Maruti Suzuki Ignis, which while being labelled a premium hatchback, offers many things the micro-SUVs do. Hence, we decided to put these three models up against each other, to see how they compare on paper.

*Dimensions could change once launched in India.

With that out of the way, what becomes evidently clear when viewing the table above, is that the Hyundai Casper is smallest of the three models. When compared to the largest of these offering – the Tata Punch, the Casper is 245mm shorter in length, width is 227mm less and height is 60mm less. It also has a wheelbase that is 50mm shorter. The Maruti Ignis on the other hand is almost a halfway point between the Punch and Casper in the context of its dimension.

As with the dimensions, it needs to be pointed out that the engine options for the Casper are for the international model and could change once brought to India. Even the powertrain options for the Tata Punch have not been officially confirmed, and these power outputs could vary on the final product.

Keeping this in mind, we can see that it is the Tata Punch that will offer the most powerful engines in the segment. Its naturally aspirated (NA) 1.2-litre, three-cylinder engine has 3hp more than the 1.2-litre, four-cylinder in the Ignis and 10hp more than the 1.0-litre NA engine in the Casper.

We will have to wait and see how the Casper and the Punch perform out on our roads, as the power output figures only tell half the story. Tuning of the engines and weight of the SUVs will also have a big impact on how they perform.

Both the Hyundai Casper and the Tata Punch are expected to be priced quite aggressively and are likely to have pricing similar to the Maruti Ignis, which ranges from Rs 4.95-7.37 lakh (ex-showroom, Delhi). However, this also means that the higher trim variants of both micro-SUVs will likely overlap with the lower trims of their larger siblings – the Venue and Nexon. They will also compete with other compact SUVs like the Nissan Magnite and Renault Kiger – that are priced extremely competitively.