How does the 2020 Honda City sedan compare with its predecessor on size, styling, features and more? 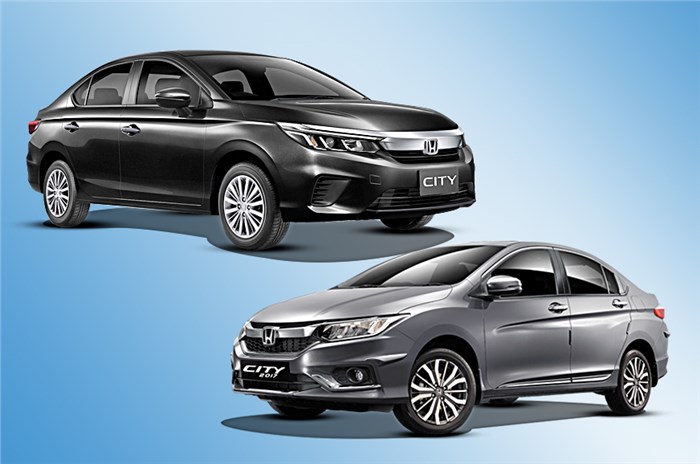 The 2020 Honda City sedan has just made its debut in Thailand. The model, which is slated to go on sale in India in mid-2020, features fresh new styling and a sportier interior. The City has been the backbone of Honda India's operations for over 20 years, and the carmaker will hope the latest model takes the success story forward. The question is: how much of a step ahead is the new City? To get the answer, we’ll see it in contrast to the popular outgoing model.

To give you a brief about the fourth-gen City – it’s been on sale in India since 2014, and received a mid-cycle facelift in 2017. Let’s see how Honda City's old and new compare.

In terms of dimensions, the new-gen City is a substantial 113mm longer and 53mm wider than the current-gen car. However, the new City is also 28mm lower and it sits on an 11mm shorter wheelbase. The fourth-gen City set the benchmark for cabin space at its launch in 2014. Going by the wheelbase and width numbers, the new City could offer similar legroom as the current car with the added advantage of having more shoulder room.

Of the other specs worthy of note, the new City retains a 40-litre fuel tank but weighs-in at 1,165kg – 65kg heavier than the car it replaces. However, the India-spec model could have a different kerb weight.

A point worth noting is that the Thai-spec new City comes shod with 15-inch rims wrapped in 185/60 tyres. The India-spec City would at least match the outgoing model’s 16-inch, 185/55 tyres.

The latest City features new styling but remains recognisable as a City sedan. Up front, it retains the thick chrome band above the grille but gets larger and sharper wraparound headlights, which are likely to be LED projectors with DRLs on high-spec models. The grille itself is larger than that of the current car; and its bumper features sharper styling.

On the side, the new car gets a more prominent shoulder line that runs from its headlight to its taillight. Meanwhile, the fourth-generation’s character line starts from the tail-light and ends on the driver’s door. Both models feature subtle creases on the lower part of the doors and get diamond-cut alloy wheels.

At the back, the new City’s wraparound tail-lights extend much further on to the side of the car. The lights themselves are LED units, like before, but now get a 3D design with a blacked-out upper section. The reflectors too, are vertically-positioned now, in comparison to the horizontal orientation of those seen on its predecessor. The fifth-gen also loses the chrome strip between the tail-lights that features on the current model. 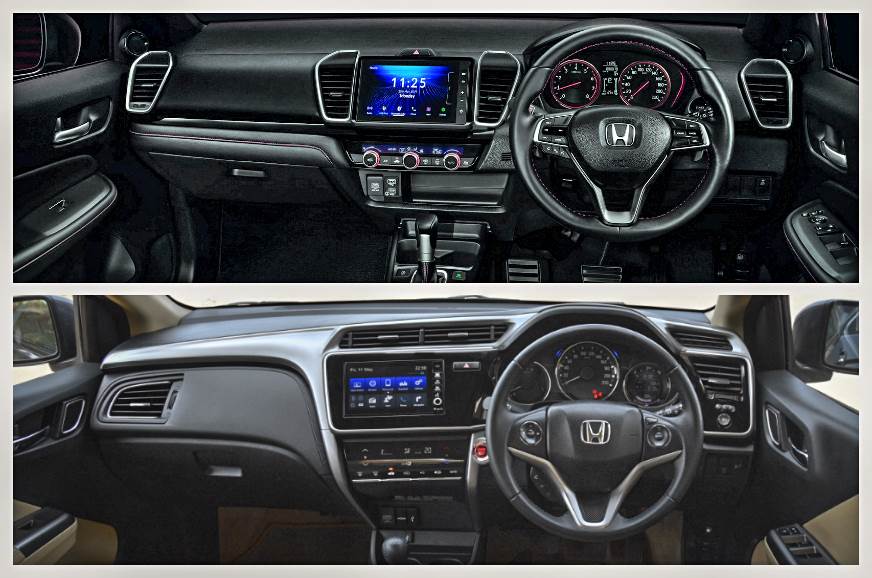 For its fifth generation, the City gets an all-new dashboard that bears almost no similarities with the fourth-gen model. The Thai-spec new City gets an all-black interior theme but the India-spec car could get a beige-on-black theme, keeping it in line with the current model. Furthermore, it retains the brushed aluminium and piano black trim on the dashboard from the present car, which helps uplift the cabin.

The outgoing City’s asymmetrical dashboard has made way for a more straight forward design, with a large, 8.0-inch touchscreen at the centre that’s flanked by vertically positioned aircon vents. Interestingly, Honda seems to have also done away the outgoing car’s touch panel-based climate control setup for a more user-friendly and conventional three-rotary-dial setup. In terms of instrumentation, the new City continues with the twin-analogue dials and a decent-sized multi-info display. However, while the current City’s MID is positioned on the right side of the two dials, the new car’s MID is positioned in-between. The three-spoke steering wheel is also new, so are the brushed-aluminium pedals.

In terms of features, the new City retains most of the current top-spec City’s equipment list which includes six airbags, ABS with EBD, automatic climate control, cruise control, LED lights and a large touchscreen infotainment screen. The Thai-spec new City also comes with vehicle-stability control and hill-start assist; although it remains to be seen if these features will make it to the India-spec sedan.

The outgoing Honda City can be had in India with two engine options – a 119hp, 1.5-litre petrol engine and a 100hp, 1.5-litre diesel motor. While the petrol is available with either a 5-speed manual or CVT automatic gearbox, the diesel comes with a 6-speed manual as standard.

The new City will come with BS6 versions of these engines; and transmission options are unlikely to be changed either. Also part of the City line-up will be an all-new 1.5-litre petrol engine, coupled with Honda’s compact i-MMD mild-hybrid tech that made its international debut on the new Jazz recently. However, Honda is yet to reveal any details of the hybrid powertrain.

Interestingly enough, the engine in the spotlight at the new City’s Thai unveil event was a new 122hp, 1.0-litre turbo-petrol engine coupled with a CVT gearbox option only. However, this high-efficiency engine will not be on the cards for the Indian market.

Do you think the latest Honda City has the ingredients to shake up the midsize sedan segment like its predecessors did? Let us know in the comments section below.