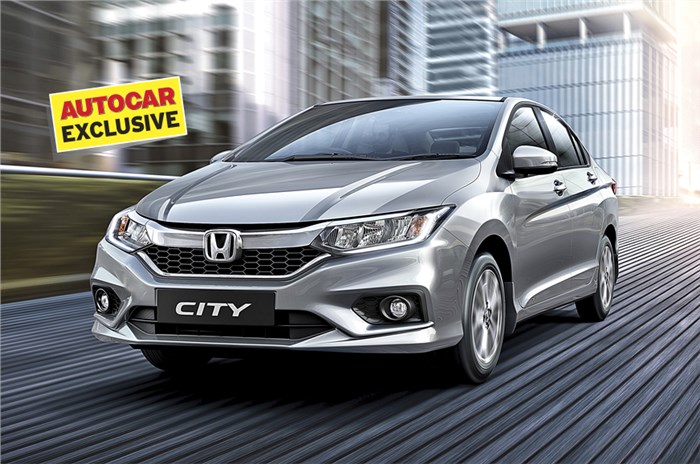 Honda's first BS6-compliant model, the petrol-powered City, will launch in the coming days, with a price tag between Rs 10.22 lakh and Rs 14.68 lakh. This represents a price hike of about Rs 15,000 over the respective BS4-spec variants, though the entry-level City SV MT’s price will cost just Rs 10,000 more than its equivalent BS4 model. The table below has the details:

The same 119hp, 1.5-litre, four-cylinder petrol engine available previously has been upgraded to meet the new emission norms, which has resulted in the price hike. Along with prices of the BS6 petrol City, we can also confirm that both, manual and CVT automatic options will continue to be on offer, along with the same four variants, as we had reported earlier. Based on the somewhat marginal increase in prices, the equipment on offer with each variant is not expected to change.

Considering the Honda City was already on the expensive side of the midsize sedan segment - where it rivals the likes of the Maruti Suzuki Ciaz, Hyundai Verna, Toyota Yaris, Skoda Rapid and the Volkswagen Vento - the increase in its price shouldn’t affect its sales all that much.

For now, the 1.5-litre petrol engine, which also sees duty in the BR-V, will be the only BS6-compliant engine that Honda has to offer. However, the 1.2-litre petrol (available on the Amaze, Jazz and WR-V) and the 1.5-litre diesel engine (used on nearly every mass market Honda car from the Amaze to the BR-V) will also be upgraded before the April 2020 deadline for the stricter emission norms.

In its current form, the Honda City will soldier on until the end of next year, when the all-new fifth-gen City will arrive in India. The next-gen midsize sedan will be revealed on November 25 in Thailand, before being introduced to the Indian market. Besides the addition of a diesel-CVT option to the Honda City range, the all-new model will also come with a mild-hybrid petrol engine option.

2020HondaJazz not coming to India