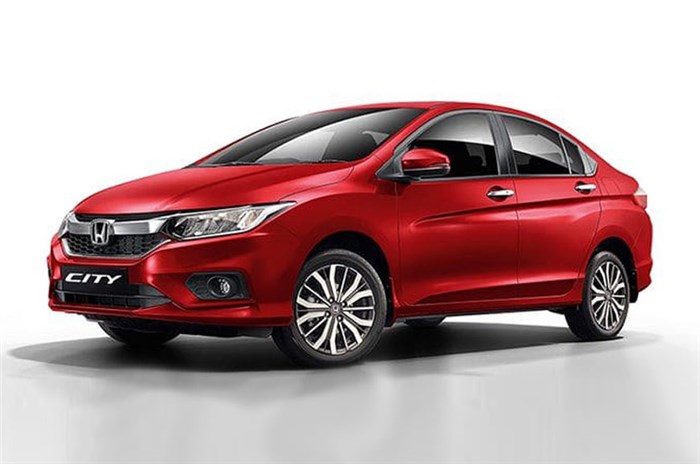 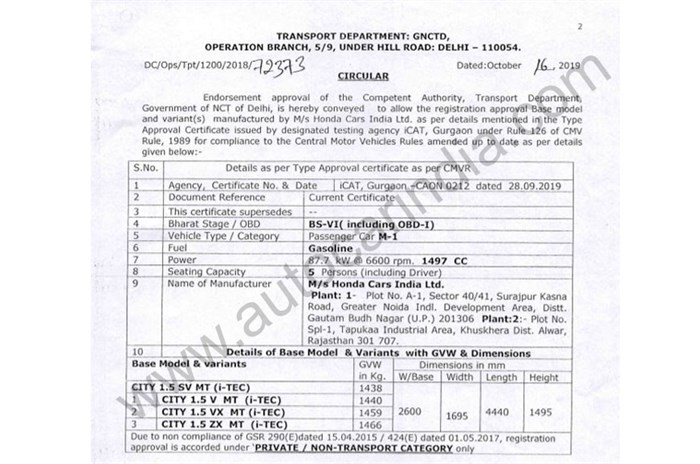 With the BS6 deadline just five months away, Honda is in the final stages of upgrading one of its most popular models in our market, the City mid-size sedan, to the more stringent emission norms.
As per an official document that we’ve managed to get access to, we can confirm that the Japanese automaker has received type approval for the BS6 version of its 1.5-litre petrol engine from competent authorities and as such, the City with the upgraded powertrain can be expected to go on sale soon. While the City will most-likely be Honda's first BS6 compliant model for India, its key rival the Maruti Suzuki Ciaz is available with a BS6 compliant petrol engine since a few months.

Whilst engines complying with the stricter regulations often experience a drop in the rated output, Honda has managed to ensure the same 119hp power figure for the upcoming 1.5-litre, four-cylinder, naturally aspirated gasoline engine as its current BS4-compliant counterpart. The reworked petrol motor will be allied to a manual transmission as standard, though official details of a CVT offering on the engine remain to be confirmed.

As with the BS4-compliant mid-size sedan, the upgraded petrol-manual City will be offered in four trim levels – SV, V, VX and ZX. In terms of equipment, the base SV will have the essentials covered with dual airbags, ABS, rear parking sensors, LED DRLs, 15-inch alloy wheels, remote locking, power wing mirrors and windows, automatic air conditioner, Bluetooth-compatible audio system and cruise control. The mid-spec V trim will add a 7-inch touchscreen, keyless entry and go and a rear camera to the mix.

Going up the variant line-up to the VX will get you conveniences like a sunroof, telescopic steering adjust, auto-dimming interior rear view mirror and larger 16-inch alloy wheels. Features including side and curtain airbags, LED headlamps, auto head lights and wipers and leatherette upholstery will remain exclusive to the range topping ZX trim.

On the diesel front, Honda has previously confirmed that it will continue with a diesel powertrain option post April 2020 for its Maruti Suzuki Ciaz and Hyundai Verna contender. For reference, the current-spec City comes with a 100hp, 1.5-litre oil burner mated to a 6-speed manual gearbox.

In terms of price, the Honda City is presently retailed at Rs 9.81-14.16 lakh (ex-showroom, Delhi) and the move to the more stringent emission regulations can only be expected to drive the prices further.

It is important to note that the BS6 engines will roll out to the current-gen sedan soon and this update must not be confused with the fifth-generation Honda City that is slated for a global unveil next month. As we have previously reported, the all-new sedan will get three engine options under the hood – a small-capacity turbo-petrol, a gasoline engine with mild-hybrid tech and a diesel motor, the last of which will also be offered with a CVT auto transmission for the first time. India launch for the new City can be expected in the second half of 2020.