An all-new platform, electric drivetrain and new tech, like the Hyperscreen, mean that the EQS is unlike any other Mercedes-Benz ever put together in India. 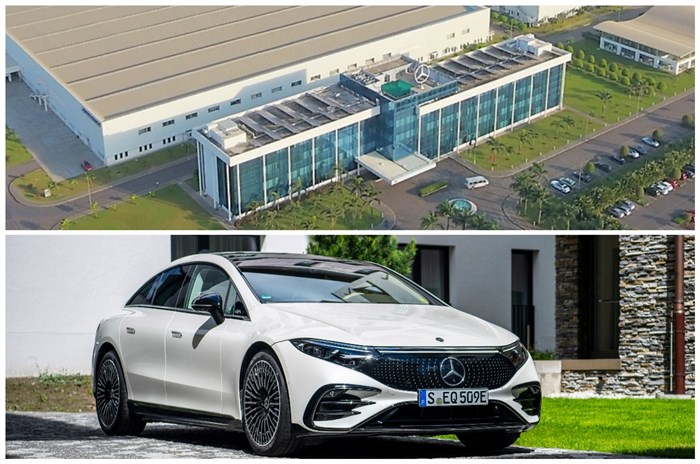 Mercedes-Benz recently announced that the EQS will be assembled in India and launched later this year. While the German marque already makes a wide range of its combustion engine products here, this will be the first time it will be putting together an EV at its Chakan plant near Pune. “Considering production, the EQS is a new animal,” Martin Schwenk, MD and CEO, Mercedes-Benz India told Autocar India in a recent interview.

Commenting on its planned assembly, Schwenk added, “The EQS needs a different approach since it’s a high-tech product.” As such, the company will be upgrading its manufacturing set-up to accommodate the EQS.

How Mercedes-Benz plans to assemble an EV in India

“The EQS is the first product in the Mercedes-Benz stable to be underpinned by the bespoke EVA (Electric Vehicle Architecture) platform. This will require a dedicated assembly line with new hardware,” said Schwenk. He mentioned that “some adjustments will also happen in the structural elements” of the Chakan factory. However, he added, “It’s not a massive investment. It will fall in line with a normal product update.”

More than the vehicle platform itself, it will be the technology Mercedes-Benz has packed into the car that will require greater attention. “I think the more important component is the high voltage (battery) technology which needs completely different management, devices, protections and measures around it,” commented the Mercedes-Benz boss. For reference, the EQS gets up to a 107.8kWh battery that is rated at 400V and said to deliver a claimed range of up to 770km on Europe’s WLTP test cycle.

The EQS also debuts Mercedes’ Hyperscreen – a glass pane that spans the width of the dashboard and incorporates three displays. Schwenk mentioned that the combustion engine S-Class, which the company assembles in India, is “already extremely complex and advanced.” “And now on the EQS, we go to the Hyperscreen – the next level in connectivity.”

“So, the challenge of assembling the car is lower than the challenge of dealing with the new technology – the electric components and digital systems for which we don’t have the experience,” he continued.

To that effect, Mercedes-Benz will be training its manpower to deal with these complex systems. And the training won’t just be limited to its workforce at the factory, but will also be extended to its dealers who will be retailing and servicing the EQS. “So, there is a lot that will happen and something which we will master,” Schwenk said.

Though the EQS is Mercedes’ flagship EV, the company expects it to register decent volumes. “The focus is to come with a car which we can sell in relevant numbers – something that gets it out of the niche and brings it into the mainstay,” commented Schwenk.

He added, “It’s not just some fancy CBU import with (targets of) 50-odd units. It would be a cornerstone of our electric strategy.”

What works for the EQS is that EVs are taxed at a flat 5 percent of GST, while the petrol or diesel-powered S-Class falls in the 48 percent tax bracket (28 percent GST + 20 percent cess). A roomy cabin and an electric powertrain further give the EQS a leg up. However, Mercedes-Benz’s India chief believes that the EV won’t end up cannibalising sales of the traditional S-Class.

Though demand for the EQS is “extremely high”, Schwenk said, “This wouldn’t eat into the S-Class portfolio because I see them as being distinctly different.” He highlighted that an S-Class customer primarily spends time in the rear seat, being chauffeur driven. On the other hand, the EQS will be positioned more as a “driver’s car”.

Factors such as the instant response of electric motors and a low centre of gravity, afforded by the floor mounted battery pack, will certainly work in favour of the EQS’ dynamics – something that will appeal to those who are “interested in driving”. “And we have a lot of such customers,” mentioned Schwenk.

He added, “The EQS is a big car. So, you can still have both uses – you can be driven. But the joy and aspiration lies in driving the car and sitting in the first row.”

What do you think about Mercedes-Benz’s decision to assemble the EQS in India? Let us know in the comments below.

This is a brilliant idea Mercedes Benz is taking. The training of stuff and retail personnel will boil up to nothing but profit if you can view it from taxes perspective. I also agree to the idea of having an option driving or be driven. I like driving, that enjoyment. I'm now old retired I wish I could have to experience this new technology happening. IK Dube

This is a brilliant idea Mercedes Benz is taking. The training of stuff and retail personnel will boil up to nothing but profit if you can view it from taxes perspective. I also agree to the idea of having an option driving or be driven. I like driving, that enjoyment. I'm now old retired I wish I could have to experience this new technology happening. IK Dube