The upcoming Glanza’s infotainment system is based on Suzuki SmartPlay Studio unit. 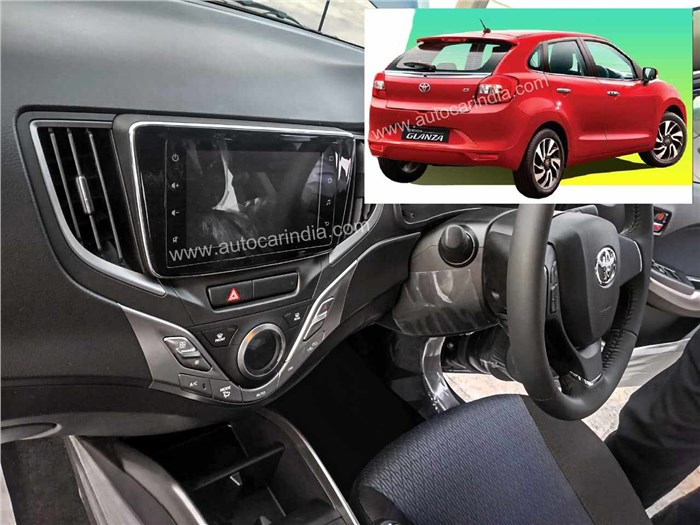 Interestingly, Toyota will offer a 12-month free trial of the Toyota connect app with the Glanza. In contrast, Maruti Suzuki charges Rs 10,000 for a three-year subscription of the Suzuki S-Connect app that is available on the Baleno. However, from the information available, Suzuki’s S-Connect telematics app is more comprehensive than what Toyota offers.

Slight differences in infotainment system aside, the Glanza and Baleno will also differ in their warranties. As reported by us earlier, the Glanza will come with a 3-year/ 1,00,000km warranty as standard on all variants, just like other Toyota offerings in India. In contrast, the Baleno comes with a 2 year/40,000km warranty.

Toyota will sell the Glanza in two variants and two engine gearbox options. The Toyota Glanza G Smart Hybrid will come with the new Suzuki K12N 1.2-litre DualJet petrol engine with Smart Hybrid tech that made its debut in the Baleno recently. This version would be unique in the Toyota universe, being the only hybrid with a manual gearbox.  The Toyota Glanza will also be offered with a 1.2-litre K12M engine that churns out 83hp and 113Nm of torque. This engine will be offered with a 5-speed manual gearbox and a CVT gearbox as well.

Key rivals to the Glanza include its badge-engineered twin, the Baleno, Honda Jazz and the popular Hyundai i20 hatchback. The Toyota Glanza launches on June 6, 2019.