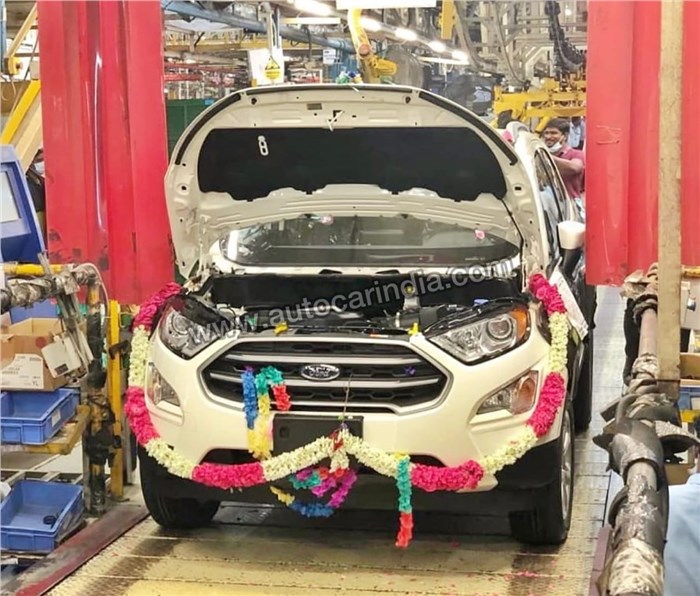 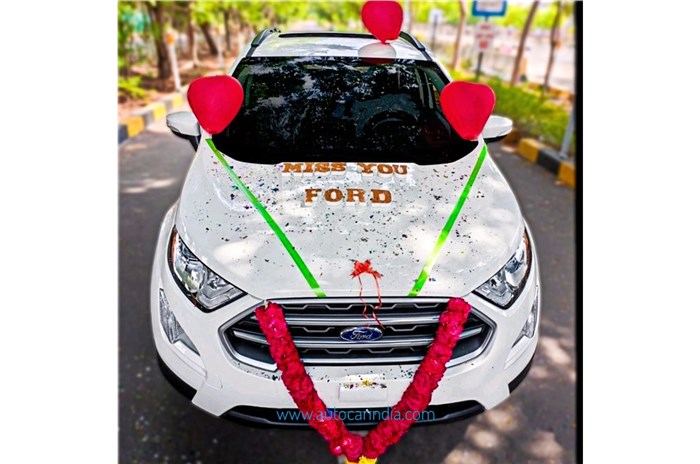 Last unit of Ford EcoSport decorated ahead of dispatch.

The curtains have closed on made-in-India Ford vehicles as the last unit of the EcoSport compact SUV, built for export markets, rolled off the production line at Ford’s Maraimalai Nagar facility. This ceases Ford India’s stint of making cars and SUVs in India for domestic and export markets.

WIth the final unit of the EcoSport rolling out, Ford becomes the third major carmaker to exit India after General Motors and Daewoo. Ford had announced that it will stop selling cars in the Indian market on September 9, 2021, but will continue to build vehicles for its export market commitments. The newer, more advanced Sanand facility in Gujarat was the first to shut shop as the models produced there – the Figo and Aspire – were slowly taken off the shelves not just in India, but overseas too due to lesser demand and end of product life. This plant will be taken over by Tata Motors in the future.

Ford’s first plant in India, the Maraimalai Nagar facility in Tamil Nadu, was one of the major manufacturing facilities for the Ford EcoSport, and the carmaker continued manufacturing the EcoSport for overseas markets even after ending sales of its cars and SUvs in India. The made-in-India EcoSport was exported to several countries including the United States.

While there were a variety of reasons for Ford pulling the plug on its manufacturing operations in India at both plants, the key reason was that plant capacity utilisation was unsustainably low. Both facilities, which can together produce more than 4 lakh units annually, were only managing 80,000 cars (around 20 percent of the capacity), with half of those being exported.

Another nail in the coffin was Ford’s failed partnership with Mahindra, which was announced in 2019, but cancelled on December 31, 2020. The American brand had wrapped its future in India around this joint venture and its failure had a major impact on Ford India.

Ford also confirmed that the brand has accumulated over $2 billion (around Rs 16,000 crore) in operating losses over the past 10 years and demand for new vehicles had been weaker than forecasted.

Ford had announced that by Q2 2022 it will be closing down its manufacturing facilities altogether in India, and hence, won’t be producing models for export either. Although the brand had announced that it will continue to rely on India-based suppliers for parts for its global products.

The company was earlier planning to finish its production of the pending units of the Ford EcoSport in June 2022. However, worker unrest led to delays and the deadline was extended till the end of this month.

Six months after Ford announced its exit from the Indian market, the company announced that it was “exploring the possibility of using a plant in India as an export base for EV manufacturing” under the government’s PLI scheme.

Ford, however, dropped out of this scheme too as the production capacity at its Chennai facility could pose a long term challenge for production worldwide. Ford is betting big on the EV business and would have ideally needed more capacity to make this a reality.

The EcoSport went on sale in India back in 2013 and was a trendsetter as far as under-four-meter compact SUVs go. Ford managed to sell over two lakh units of the compact SUV globally by 2015. The SUV, during its life cycle in India, received multiple updates with another one being in the pipeline before Ford decided to wrap up its India ops.

Is this the final good bye for Ford India?

The move to cease production and sales entirely in India has surely resulted in far lesser touch points for Ford, which will affect existing customers to some extent. The brand had said that it will focus on bringing its fully-imported models to India in the future, however, there hasn’t been any update on that front yet.