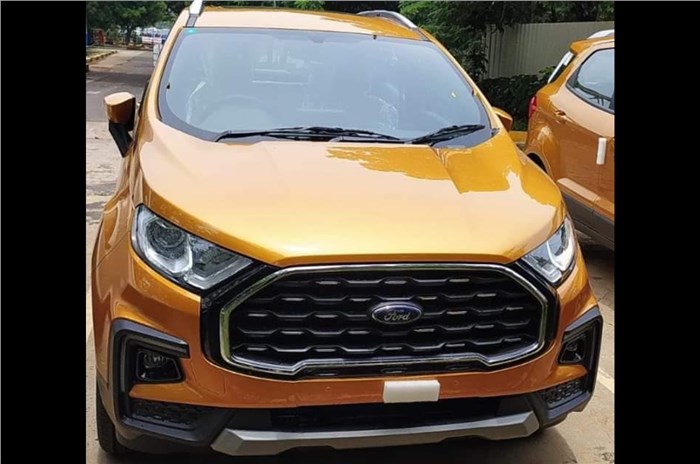 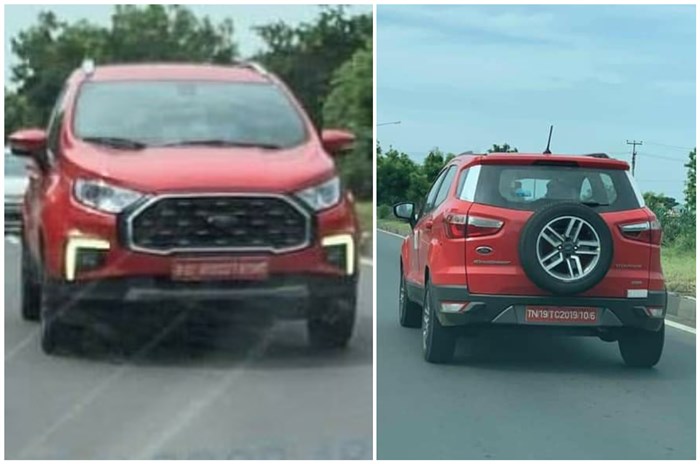 The Ford EcoSport facelift has been spied fully undisguised while undergoing testing on the outskirts of Chennai. The updated compact SUV is expected to be in showrooms in the coming months.

The spy pictures reveal certain key details about the upcoming Ford EcoSport facelift. For starters, it gets a reshaped front grille with new inserts and chrome lining around the edges, a new front bumper and fog lamp housings. Around the fog lamps are the new, inverted L-shaped LED DRLs, while there’s a faux skid plate lower down on the bumper. New alloy wheels are also part of the package.

Apart from these, there aren’t many exterior changes expected on the EcoSport facelift. The model in the spy pictures appears to have retained the same headlights, tail-lights and ORVMs as the outgoing car. The photographs don’t reveal any details about the interior but expect Ford to spruce up the SUV's cabin with newer textures and more features.

While there is no official confirmation yet, the EcoSport facelift is expected to carry forward the powertrain options of its predecessor. This means the compact SUV will get the option of either a 100hp, 1.5-litre turbo-diesel or a 123hp, 1.5-litre, three-cylinder, naturally-aspirated petrol motor. Both engines are likely to come with 5-speed manuals as standard, with the petrol expected to retain the option of a 6-speed torque converter automatic from the outgoing model.

A 1.2-litre turbo-petrol engine from Mahindra’s mStallion family was on the cards as well, but those plans are now shelved due to the fallout between Ford and Mahindra's strategic partnership earlier this year.

The Ford EcoSport facelift will have to contend with other compact SUVs such as the Hyundai Venue, Tata Nexon, Maruti Suzuki Vitara Brezza, Toyota Urban Cruiser, Kia Sonet, Nissan Magnite and the Renault Kiger.

The EcoSport has been in India since 2013 and has received regular updates to its features, equipment, styling and mechanicals, in order to stay competitive in the ever-growing compact SUV market. The EcoSport continues to be an important model for Ford, not just in India but globally as well. The SUV is made in India and exported to multiple markets in North and South America.

Apart from the EcoSport, Ford in India also retails the Figo hatchback, the Freestyle cross-hatch, the Aspire compact sedan and the Endeavour SUV. The American brand recently introduced a new automatic transmission on the Figo.