First Citroen model for India to be revealed on April 3, 2019

Groupe PSA chairman, Carlos Tavares, will be present at Citroen’s first press conference in India; C5 Aircross SUV likely to be showcased as the first product for our market. 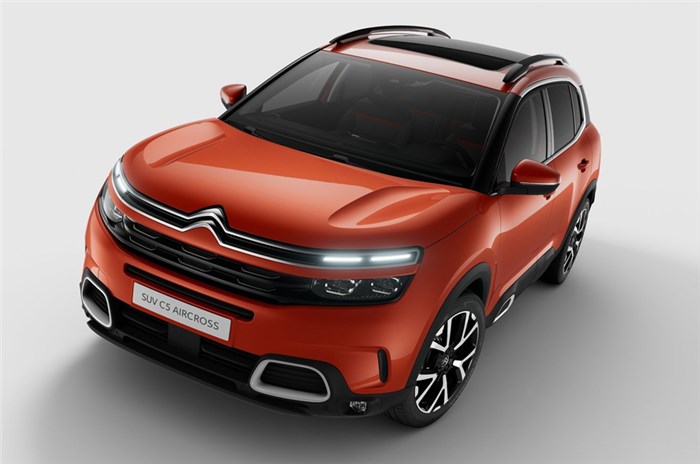 Since the beginning of 2019, Citroen has been in the news in India. It started with the sighting of the C5 Aircross, and at the end of last month, Groupe PSA confirmed it had indeed chosen Citroen as the brand that would lead its India re-entry. Now, Groupe PSA has announced Citroen will be hosting its first-ever press conference in India on April 3, 2019, and more importantly, will reveal the first Citroen model for India.

Carlos Tavares, chairman, Groupe PSA, will be present at Citroen’s India press conference, accompanied by Linda Jackson, CEO, Citroen Brand, and Emmanuel Delay, executive VP and head of India-Pacific, Groupe PSA. At the press conference, Citroen is likely to reveal the C5 Aircross SUV as its first model for India, which is due to go on sale before the end of 2021. The C5 Aircross, which made its global debut in 2017, is based on Groupe PSA’s EMP2 platform and gets a range of petrol and diesel engines, internationally.

In an exclusive interaction with Autocar India at the 2019 Geneva motor show, Tavares mentioned the byword for Citroen in India will be ‘scalability’, and also hinted at the high levels of localisation the company is aiming for right from day one. Outlining the need for components to be sourced locally, Tavares said, “It is obvious that if you want to profitably sell cars in India, you have to locally source no less than 90-95 percent of the parts. It is not a point of discussion but is a given. If you can't do it, don’t come.”

Groupe PSA will manufacture its cars and SUVs at CK Birla’s facility in Tiruvallur, Tamil Nadu; this plant also manufactures SUVs for Mitsubishi in India. The group already has a plant in Hosur, Tamil Nadu, which manufactures and supplies engines and transmissions for its global and domestic businesses. The brand is also set to offer a plug-in hybrid variant of every new model based on PSA’s EMP2 platform and also an all-electric variant of all new cars based on the CMP architecture.

Groupe PSA hopes that Citroen, with its distinctive exterior and interior designs, will have an impact on the Indian car market even when it arrives with its first product before the end of 2021.

Which cars would you like to see Citroen bring to India? Let us know in the comments.