Lockdowns and an increasing number of COVID-19 cases across India has led to the temporary shutdown of many manufacturing plants. 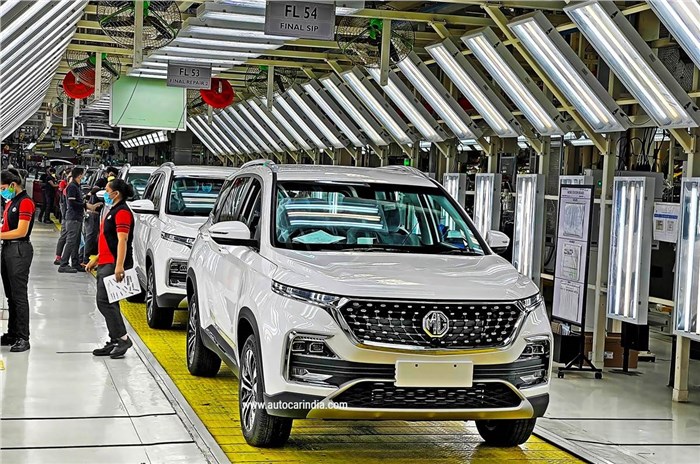 In recent weeks, there have been a number of automakers that have had to shut down their manufacturing plants due to the rapid increase in COVID-19 cases and the attendant lockdowns in many states across India.

The list of manufacturers that have halted production includes Maruti Suzuki, MG and Toyota, with even some bike makers like Honda Motorcycle & Scooter India (HMSI) and Hero MotoCorp having followed suit. There are also a number of new car launches that have been delayed for the same reasons. It is now becoming increasingly apparent that the auto industry is bracing itself for a difficult May.

Clearly, for these companies, there are enough stocks in the pipeline, which need not be clogged up further by producing more units. The best way, therefore, is to take a break and wait for the situation to ease out.

When that will happen is the million-dollar question given that COVID-19 infections and casualties are rising rapidly in Maharashtra, Delhi, Uttar Pradesh, Gujarat, Madhya Pradesh, Karnataka, Rajasthan and Punjab, with an imminent explosion expected in West Bengal, Tamil Nadu and Assam. These were the States where caution was thrown to the winds during the assembly campaign. Huge crowds were seen without masks and the results of this apathy are now becoming apparent, with cases beginning to flare up alarmingly.

There is really no option but to declare lockdowns, as is the case in Maharashtra, Karnataka, Delhi, Punjab and other states, which clearly implies that nobody is going to be able to venture out and buy a car or two-wheeler. Further, dealerships are closed in major cities like Delhi, Mumbai and Bengaluru, which means that a critical part of the supply chain is closed. Why should companies then produce more? It only becomes an exercise in futility.

Plant shutdowns could be extended

As cases continue to surge, it is equally likely that some of these factory shutdowns may be extended beyond the dates announced as States scramble to cope with the crisis. Further, as evident last year, critical supply chains like Maharashtra will hold the key since a host of vendors cater to the rest of the country from hubs like Chakan, Pimpri, Aurangabad and so on.

Smaller suppliers will have their work cut out keeping labour migration in check, especially when mass fear and paranoia grip the workforce. If they are forced to cut back on operations because of a crunch in liquidity as well as labour, component supplies to other parts of India are impacted. How can vehicle manufacturers then keep the show going?

Quite unlike last year, the Centre has made it clear now that lockdowns will be the last resort simply because economic activity cannot be compromised, keeping in line with the lives versus livelihoods mantra. To that extent, States have been given the choice to decide and most of them have resorted to lockdowns since this is the only way to break the virus transmission chain.

Manufacturers know only too well that this is a huge crisis building up, evident from the disturbing visuals of people gasping for breath in ICUs or the pileup of corpses in crematoriums. Even as all the protocols are in place at factories, it still becomes a challenging task when the rest of the supply chain is not in-sync.

Experts believe that the peak of daily infections will come about in mid-May but there is still no concrete data to back this claim. If the spiral continues even after this date, then more automakers could start shutting down operations since it makes little sense to produce cars and bikes.

The problem is that this could end up hitting those companies that also export units. When there are not enough trucks and containers to cart out vehicles from the factories to ports, the challenges will only intensify going forward.

The silver lining in the cloud now is the availability of vaccines but many States have already complained of shortages at a time when the net has been widened to include everyone over 18 years old. As queues extend in vaccination centres, the fear is that these very places could end up becoming super spreaders of the virus.

These are hard days ahead for the auto industry but there is really no way out except to be patient and weather the storm. For now, it looks as if sales in May 2021 will be little to write home about. A section of manufacturers is also optimistic that the virus has not spread yet to rural India (which is a critical growth engine) but all this will only be evident in the coming weeks as the migration exodus continues.

2021 INRC Chennai round postponed due to COVID-19 surge

How to maintain your car during the lockdown