Bestselling UVs in India in FY2019

Despite less than expected overall sales growth in UVs, the top five sellers retained their positions from FY2018. 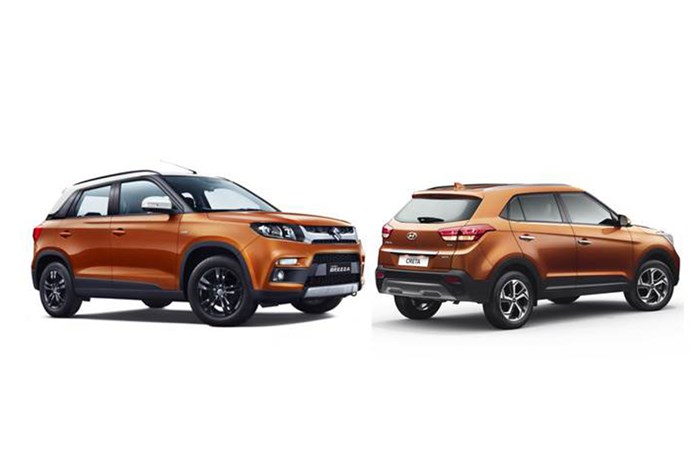 What scooters are to the overall two-wheeler market is what utility vehicles (UVs) are to the passenger vehicle market. And like poor sales of scooters (-0.27 percent) pulled down the two-wheeler market in FY2019, UVs too (+2 percent) impacted overall PV numbers which ended in single-digit growth of 2.7 percent. Scarcely a year ago, growth for both scooters and UVs was accelerating hard at 20 percent but got upended by the sharp slowdown in the second half of FY2019.

UV makers would clearly be disappointed with the less-than-expected growth. Even though buyers do get wooed by the muscular designs of SUVs and even the practicality of being able to tackle bad roads with aplomb, the past year has seen customers becoming wary of the lower fuel efficiency delivered by these relatively bulkier vehicles as compared to their hatchback or sedan counterparts.

Although the growth might have varied substantially, the sales performance of some of the key UV models offered by a few prominent OEMs in the country has still remained consistent. Let’s take a closer look at these.

The Maruti Suzuki Vitara Brezza has remained the well-distinguished king of the UV segment, selling a total of 1,57,880 units (FY2018: 1,48,462 / +6.34 percent) in FY2019. The car also achieved the landmark milestone of surpassing sales of 4 lakh units in February this year – less than three years into its launch in India. While strong competition was felt from the Tata Nexon and Ford’s EcoSport, what helped the compact SUV’s case is the introduction of a facelift along with an AMT transmission option in May 2018.

The popular Hyundai Creta, which is today the go-to SUV for most urban buyers on the lookout for a polished UV with loads of creature comforts, secured its No. 2 position in the Top 5 UVs chart with overall volumes being pegged at 1,24,300 units (FY2018: 107,136 / +16.02 percent). The Creta also recently conquered a new milestone of going past 5 lakh units in sales in the domestic market earlier in February.

Interestingly, the sales gap between the Brezza and the Creta in FY2018 was 41,326 units. In FY2019, the gap has reduced to 33,580. Still a robust lead for the Brezza, but with the Creta holding on to a better growth rate, there could a closer battle for the title in the year to come.

At No. 3 the Mahindra Bolero  maintained its position but faced a slight slump in performance which could be attributed to the tough NBFC situation impacting the rural markets. The Bolero sold 84,144 units (FY2018: 85,368 / -0.14 percent). Given that the norm of mandatory fitment of ABS in all cars sold in the country has come into effect from April 1, the Bolero now comes with ABS as standard. Moreover, Mahindra has been rumoured to be working on a major facelift of this rugged UV in order to meet new mandatory crash regulations slated to get implemented by October 2019. The model is expected to be rolled out around the same time.

While the Toyota Innova Crysta sold 77,924 units in FY2019 (FY2018: 74,137 / +5.10 percent), the Maruti Suzuki Ertiga went home to 65,263 buyers (FY2018: 66,141 / -1.32 percent) to close the tally at the last spot. Interestingly both the MPVs are the top choices in their respective price categories which remain widely distinct. While the Ertiga is a more approachable offering by Maruti in the sub-Rs 10 lakh MPV segment, the Innova caters to a more discerning buyer looking for a robust seven-seater, and also is a huge hit among fleet operators for the same fact. Maruti brought in the latest second-generation Ertiga in November 2018, and the new car has grown in its appeal by leaps and bounds – in the very least winning Car of the Year at the 2019 Autocar Awards.

Even though FY2019 was slow for the segment, the demand for UVs remains with buyers and manufacturers alike. Most OEMs are plotting an assault on the market with a slew of new products in the pipeline. While it all starts right today with unveiling of the Hyundai Venue, MG Motor India is next in line which will enter India with the MG Hector SUV in June. Kia Motors and even Citroen have announced India plans, all beginning with an SUV. The action is going to get even hotter.

At the beginning of FY2019, it was felt that this fiscal would play witness to UV sales crossing the million-unit sales mark after having hit 9,22,322 unit sales in FY2018; but it was not to be. Will FY2020 be a milestone year for the million-unit UV milestone in India? Watch this space to know.