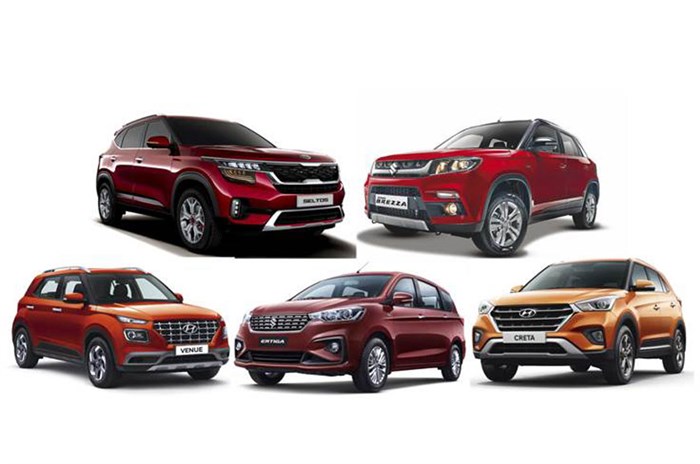 The Kia Seltos retained its top spot in the utility vehicle (UV) segment, racking in its best-ever monthly sales figures of 14,005 units in November 2019. The figures also saw cumulative sales of the SUV rise to 40,581 units in the four months since its launch on August 22, 2019. This translates into a monthly average of 10,145 units, or 338 units each day, between August and end-November.

The fuel-wise variant split for the Kia Seltos sales until now is 47:53 percent diesel: petrol. What has helped the Seltos cut through India's UV market is Kia's ability to match production with demand and a sound marketing strategy to offer multiple engines, gearboxes, variants, at multiple price points. The 16 variants cover virtually every price point and starts from Rs 9.69 lakh (for the entry-level petrol Smartstream G1.5 HTE model) and goes up to Rs 15.99 lakh (for the diesel 1.5 CRDi HTX plus (6AT) and Petrol Smartstream 1.4 T – GDI GTX (7DCT) and GTX Plus top-end variant.

With a robust 14,005 units in November 2019, the Seltos retains the UV crown it won first in October, unseating market leader Maruti Vitara Brezza. Such a consistent and strong performance has seen the Seltos and Kia take a strong 6.34 percent UV market share in just four months, and come fifth in the pecking order of 17 UV OEMs. Not surprisingly, the Seltos won the prestigious Autocar India 'Car of the Year 2020' award, along with the awards for Viewers' Choice and Midsize SUV of the Year. The Seltos also earned Kia the Manufacturer of the Year award.

The Maruti Vitara Brezza, the longstanding UV leader, seems to be fighting back. Felled by new competition, first in the form of the Hyundai Venue in September and then the Kia Seltos in October, the Brezza remains under pressure in the marketplace.

The lack of a petrol engine amidst the growing consumer shift from diesel has impacted the Vitara Brezza adversely over the past year. Nonetheless, the SUV recorded a total of 12,033 units in November 2019, which is its best monthly number in the fiscal year until now, the previous best being 11,785 units in April.

The importance of the Brezza to Maruti can be gleaned from the fact that it accounts for 46.39 percent (74,470 units) of the company's UV sales of 160,522 in the April-November 2019 period. Having decided to stop making diesel vehicles from FY2021 onwards, Maruti Suzuki is readying a new model. It has begun road- testing the refreshed Vitara Brezza, which is likely to debut around Auto Expo 2020, exactly four years after the model's world premiere at Auto Expo 2016.

With the Seltos firing on all cylinders and the Brezza notching improved sales, the Hyundai Venue, the UV leader in September, has been pushed to third place. In November 2019, a total of 9,665 units were dispatched to showrooms across the country, which looks to be its best monthly performance in the fiscal year to date.

From its launch on May 21 until end-November, Hyundai's first compact SUV has sold a total of 60,922 units comprising 24,698 diesel and 36,224 petrol variants, which makes for a 40:60 percent ratio and indicative of the consumer preference for petrol power in the domestic market. The Venue comes with three engine options – a 90hp, 1.4-litre diesel, an 83hp, 1.2-litre naturally aspirated petrol unit, and a 120hp, 1.0-litre turbocharged unit.

In the April-November 2019 period, Hyundai has sold a total of 1,22,827 UVs, which means the Venue, with 60,922 units, accounts for 50 percent of that total. The company says it has around 75,000 bookings for the Venue, which means this is one model which will continue to be in the news.

The sole MPV in the Top 5 UVs list takes fourth place with 7,337 units, better than October's 7,197 units, September's 6,284 units but less than August's 8,391 units. The Ertiga in its new avatar is seeing decent demand. With its modern design, ample space, thoughtful features and a value-for-money package, the new Ertiga is ticking most of the right boxes for family and fleet buyers.

Once a longstanding No. 2 below the Brezza, the demand for the Hyundai Creta has been impacted by newcomers like the Kia Seltos, and sibling Hyundai Venue. With sales/dispatches of 6,684 units in November, the Creta takes fifth place in the monthly Top 5. While this performance is sharply down on October's 8,576 units, it is better than September's 6,641 units, August's 6,001 units and July's 6,585 units.

The Creta has been on sale for four years now, and has been upgraded through the years with refreshed styling and more equipment. Hyundai India plans to launch the all-new Creta next year, when it completes five years in the Indian market.

UV segment coming into its own

While the UV segment's smart performance in October 2019 (100,725 units / 22.22 percent) can be attributed to festive season demand, it looks like the sales momentum is here to stay. In November, the overall UV segment recorded 92,739 units, which marks solid 32.70 percent YoY growth. The Top 5 UVs in this month's chart, with a total of 49,924 units, account for 54 percent of total UV sales in November.

Cumulative UV numbers for the April-November period are 6,40,311 units (3.83 percent), accounting for 34 percent of total passenger vehicle sales. Of those cumulative US numbers, these five UVs (Seltos, Brezza, Venue, Ertiga and Creta) make up for 300,173 units or 47 percent, an indication of the impact this quintet has on the overall UV sector.

SUVs clearly spell good news for the beleaguered Indian automobile industry, one that has seen 12 straight months of overall sales decline, a trend that could continue until the fiscal year-end and possibly beyond that. The clutch of recently launched SUVs, all from global manufacturers, play a key role in the resurgence of demand for this vehicle type, and is in line with global trends. Not surprisingly, their robust sales have resulted in their manufacturers expanding their UV market share and eating into established OEMs' share. Now, as OEMs get a fix on BS6, expect more rollouts on the SUV front.