Automakers in India gear up for BS6

Automakers are confident about rolling out BS6-ready products in time but say fuel availability is key. 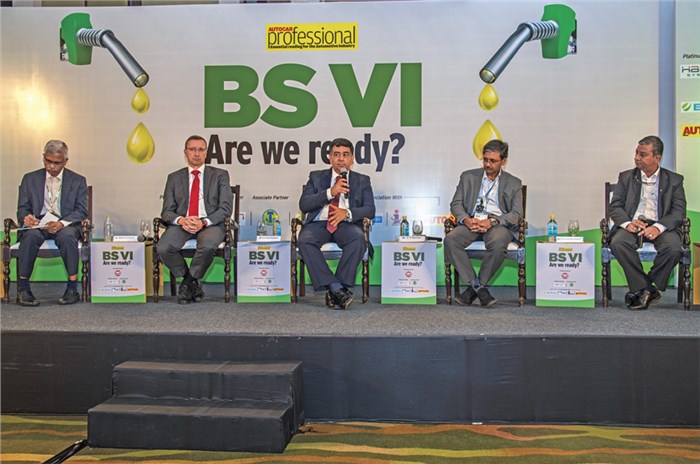 With just a little over nine months to go before the BS6 emission norms become mandatory across all categories of vehicles in the country, the Indian auto industry has shown its preparedness for meeting the deadline. At the BS6 Conclave organised in New Delhi by Autocar Professional, attended by the who’s who of the auto industry, major automotive stakeholders showcased the roadmap to the cleaner technology and highlighted issues that had to be ironed out to ensure a smooth implementation of the more stringent emission norms.

With as many as 16 brands and 51 type applications to deal with, upgrading to BS6 “was a maze that had to be unravelled” for Maruti Suzuki. Optimisation of cost was a big challenge. But the carmaker is confident of moving completely to BS6, well ahead of the deadline. As is widely known, diesels will, however, be discontinued altogether from its line-up by early next year.

Homegrown automakers, Mahindra and Tata, are also on track to meet the upcoming regulations, with the former aiming to launch its BS6-compliant petrol engines by September 2019. Mahindra has also revealed that it is ready for the next phase of the journey, with its range of 16 engines and 21 vehicles (across the passenger and commercial segments). With over Rs 130 crore invested in its facilities, the home-grown manufacturer is touting local content of about 95 percent in its upgraded engines, which should help keep the costs in check.

Rajendra Petkar, chief technology officer, Tata Motors, said with a multi-fuel vehicle portfolio, the company had to take a lot of hard decisions to rationalise the range and strike a balance between diesel and petrol, in light of cost increments.

Renault, too, believes that it is prepared for the transition to the cleaner fuel. It will soon begin introducing BS6 petrol engines in country. By leveraging its parent company’s experience in Euro6 (similar to BS6) tech, Renault India has been able to save on extensive R&D work. “Engineering costs, compared to other carmakers, are lesser for us,” said Venkatram Mamillapalle, CEO and MD, Renault India.

Mercedes-Benz India has been ahead of the curve, having introduced India’s first BS6-certified vehicle, the S 350d, in January 2018 – a good two years ahead of the government’s deadline. Martin Schwenk, MD and CEO of Mercedes-Benz India, called for a co-existence of all the technologies for future mobility and suggested a staggered approach, further improving internal combustion engines, and in parallel, step by step, introduce hybrids and EVs.

Meanwhile, component manufacturing companies, like those from Bosch and Tenneco Automotive, believe that upgrading to BS6 is not the same as moving to Euro6. Because of the lower average speeds on our roads, exclusive adaptations are required for the India driving cycle, vis-à-vis the European cycle, thus making the task of upgrading to BS6 norms in our country complex for even the global automakers.

What about fuel availability?

There was a general consensus among the automakers about the implications of the lack of BS6 fuel availability at the moment. This has exacerbated the complexity of development as well as rolling out newer engines to the market. Petroleum industry experts, however, have reassured of progress by early next year.

“As of today, BS6 fuel is available in Delhi-NCR, as well as Agra. The plan of the oil industry is to start washing off BS4 fuel from the whole system from mid-January or early-February 2020. By end-March or April 1, the nozzle tip quality of fuel all over the country will be BS6,” said Naveen Kumar Bansal, director, Federation of Indian Petroleum Industry.

Vehicle scrappage policy is the need of the hour

With the automotive industry making great strides in aspects of vehicular emissions, experts are of the opinion that there is a strong need for a well-planned vehicle scrappage policy in the country, now more than ever. “Sadly, we offset all that we gain with BS6, with older vehicles still plying on the roads. Old vehicles, including buses, trucks, cars, two-wheelers and three-wheelers, need to be systematically taken off the road. A proper time-bound scrappage policy is long due from the government,” Maruti Suzuki head, Ayukawa, said.

Although official authorities are aware of the need of decisive action in this direction for a long time, the same has not been reflected through concrete measures. However, the status quo might be up for a change. Priyank Bharti, Joint Secretary, Ministry of Road Transport and Highways, expressed, “The industry is working on a scrappage policy and discussions are in the final stage. Hopefully, in the near future, we will have something being offered to our citizens and to the industry.”