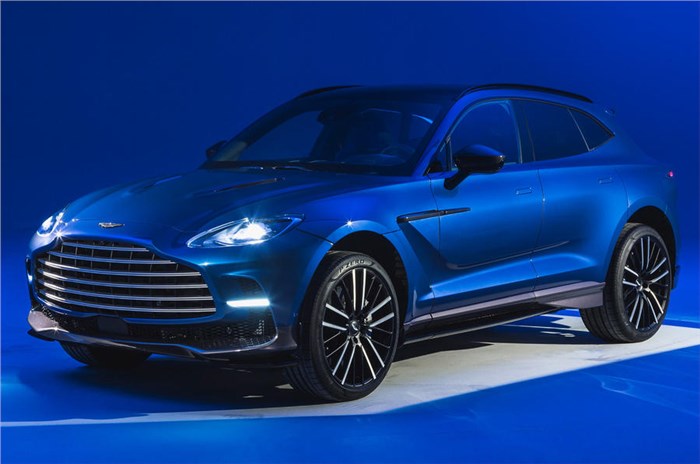 Aston Martin has taken the wraps off the DBX 707, the new flagship model in the DBX range. The Aston Martin DBX 707 is a significantly uprated performance version of the standard SUV. It comes with a raft of mechanical upgrades, making it the most powerful luxury SUV from a mainstream manufacturer, putting it above the league of the Lamborghini Urus, Bentley Bentayga Speed and Porsche Cayenne Turbo SE hybrid.

Chief among the changes is a reworking of the DBX’s Mercedes-AMG-derived twin-turbocharged 4.0-litre V8 engine from which Aston’s engineers have liberated an additional 157hp and 200Nm to take peak outputs to 707hp (hence the name) and 900Nm of peak torque. A bespoke tune and the introduction of ball-bearing turbochargers are among the most significant tweaks.

This power hike, along with the use of a quicker-shifting and more responsive wet-clutch 9-speed automatic gearbox, takes the DBX 707’s 0-100kph time down from 4.5sec to 3.3sec. It, therefore, just edges past its V12-engined Aston Martin DBS grand tourer sibling, which has a 0-100kph sprint time of 3.4sec.

In addition to superior pace, the 707 promises even greater dynamic ability than the standard DBX, courtesy of uprated air suspension, a retuned power steering system, a strengthened limited-slip differential and carbon-ceramic brake discs (which shave 40.5kg off the unsprung weight). The chassis upgrades promise flatter cornering, “tighter management” of vertical movement over bumps and reduced pitching and squatting under braking and acceleration.

“Too often this class of car is characterised by a thuggish obsession with brute force,” said Aston Martin engineering boss Drummond Jacoy. “With the DBX 707, our objective was to match immense performance with impeccable control and precision, combined with an authentic sporting character essential in every Aston Martin model.”

A bespoke styling package marks the 707 out from the standard DBX. A larger grille with a new double-vane mesh pattern is the most obvious differentiator, plus there are redesigned light clusters, air intakes and bumpers, black trim detailing, a new spoiler and larger quad exhausts.

This “overtly sporting” design theme continues in the cabin, where Sport Plus seats are equipped as standard and all the switchgear is finished in dark chrome. Bespoke to the 707 is a new driving mode selector panel that gives “immediate fingertip control of key dynamic modes”, rather than making the driver negotiate sub-menus in the touchscreen.

Speaking to our sister publication Autocar UK, Aston Martin CEO Tobias Moers suggested that the DBX 707 could go after the SUV lap record at the Nurbürgring, currently held by the Porsche Cayenne Turbo GT with a time of 7mins 38.9 seconds. "We need the high-grip tyres I think, they took a Corsa on the car. We didn’t try a Corsa so far.”

"On the standard Pirelli 23-inch, there is a pretty good grip level. We are not far off that record, but on the standard tyres. So, for sure you can imagine we have an ambition. At the end of the day, it’s a tyre test.”

Moers also said the DBX 707 could ultimately make up 60 percent of overall DBX sales. "I see the high potential in the marketplace”, he said, citing an unnamed rival car "that makes a lot of sales a year" and is "far too comfortable” for DBX 707 buyers.

Incidentally, Aston’s most recent launch in India was also the DBX SUV, but only in standard guise. Launched in January 2021, the DBX was priced in India at Rs 3.82 crore (ex-showroom). The British brand’s model line-up in India also includes the DB11 and the Vantage.

Do you think Aston Martin should attempt a Nurbürgring lap record with the new DBX 707? Let us know in the comments below.