Equipped with seven airbags and a host of other safety features, the 12th-gen Toyota Corolla has secured a five-star rating for both, adult occupant and child occupant protection. 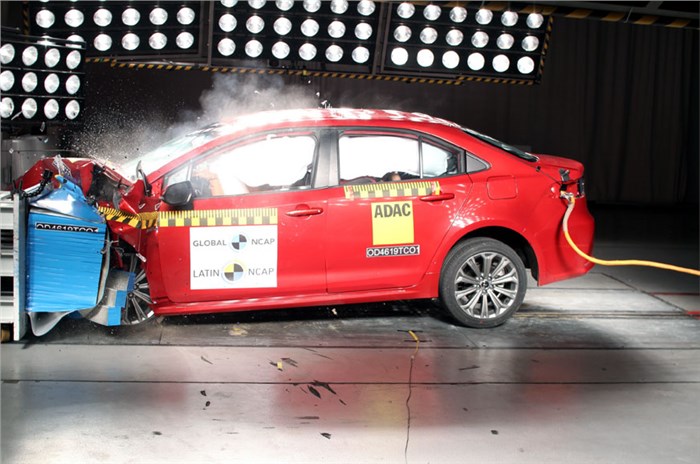 In the latest round of crash tests conducted by Latin NCAP, it’s the 2020 Toyota Corolla that shone the brightest, securing a full 5-star rating.

Now in its 12th generation, the Toyota Corolla tested by Latin NCAP was the Brazil-spec car, which, as standard, comes with seven airbags, electronic stability control and ISOFIX anchorages. It can even be specified with autonomous emergency braking, which is available as an option.

In Brazil, the new Corolla – based on Toyota’s TNGA platform – is available with two engine options – a 177hp, 2.0-litre petrol and a 1.8-litre petrol paired with two electric motors.

However, if you’re waiting for the arrival of the new Toyota Corolla in India, here’s some bad news. Toyota is set to drop the Corolla from its India range once the current-gen Corolla Altis is phased out. Toyota had hoped Maruti Suzuki – under the global partnership between the two companies – would share the cost of launching the next-gen Corolla. However, Maruti Suzuki decided against it, leaving Toyota to absorb the entire cost of the all-new model, which, with the executive sedan segment shrinking, would make the new car unprofitable.