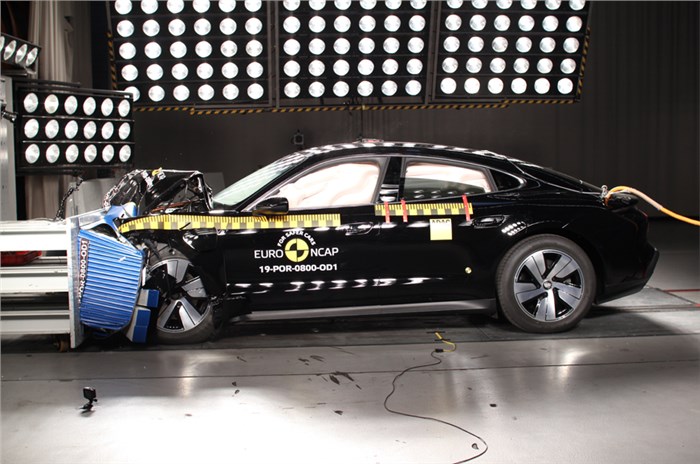 The Porsche Taycan was tested in the most recent round of Euro NCAP’s crash test and it secured the maximum safety rating of five stars. The Taycan was not the only EV to be tested in this round; the Tesla Model X was also tested and it too secured a 5-star rating but with a higher overall score. Euro NCAP will have another round of tests – the final round for this year – and its results will be declared on December 18, 2019.

The Porsche model tested was the entry-level Taycan 4S which was equipped with the Performance battery package. The adult occupancy rating on the Taycan 4S was 85 percent (scoring 32.3 out of 38 points), child occupancy safety rating was 83 percent (41 of 49 points), the vulnerable road users rating was 70 percent (33.8 of 48 points), while it scored 73 percent (scoring 9.5 of 13 points) in the safety assist system category.

In terms of safety equipment, the Taycan 4S was equipped with eight airbags, seatbelt pre-tensioners with load limiters, speed assist, lane keep assist, and Autonomous Emergency Braking (AEB) for pedestrians and cyclists in both city and inter-urban settings as standard.

As we had previously reported, the director of Porsche India, Pavan Shetty, announced that the Taycan will go on sale in India in 2020. While no announcement has been made about pricing or which variants will be brought to our market, we expect the Taycan EV to be priced upwards of Rs 2 crore.