Compared to the standard Rider, the Rider Plus offers additional exterior paint shades and a 6.5-inch touchscreen infotainment system. 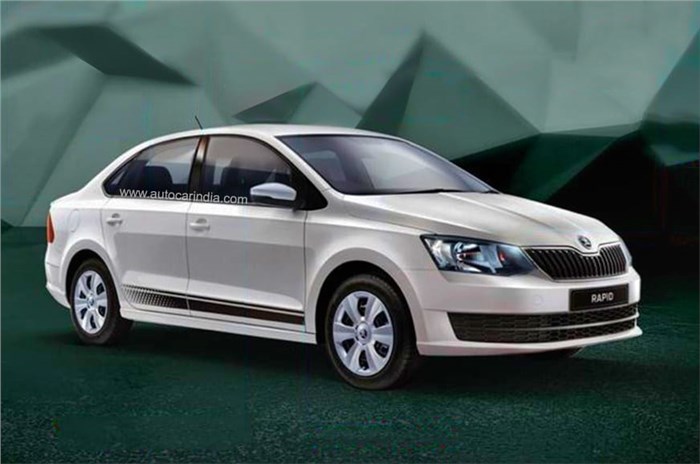 Skoda has launched a new variant for the Rapid TSI, the Rider Plus. Priced at Rs 7.99 lakh (ex-showroom, India), the new variant is positioned below the mid-spec Ambition and gets some additional features, paint and trim options over the Rapid Rider.

How is it different from the Rapid Rider?

The Skoda Rider Plus is also available with more colour options when compared to the base Rider. While the latter is only available in Candy White and Carbon Steel, the Rider Plus can also be bought in Brilliant Silver and Toffee Brown. Other differences include additional chrome garnishing on the exterior that can be seen around the window-line and on the boot lid.The remainder of features are in line with the base Rider, and include kit like auto climate control, tilt and telescopic adjust steering, remote locking, rear AC vents, rear-centre armrest, rear parking sensors, ABS, dual front airbags and more.

You still don’t get alloy wheels, something you expect, and also missing on the Rider Plus are projector headlamps, auto headlamps, auto wipers, cruise control and even a height-adjustable driver’s seat.

The Rider Plus comes with the new 110hp, 1.0-litre TSI turbo-petrol engine paired with a 6-speed manual gearbox as standard.

Is it good value?

Coming to the price, the Rider Plus, at Rs 7.99 lakh, costs Rs 50,000 more than the base Rider. While the extra money basically gets you a touchscreen infotainment system and a wider selection of exterior colours, the car is still well priced. Amidst rivals, the base Maruti Ciaz Sigma is the closest, at Rs 8.32 lakh, but that too misses out on some equipment like alloy wheels, auto climate control, fog lamps, driver seat height adjust and a touchscreen infotainment system. So, the Rider Plus is still good value for money. The gap to the higher spec Ambition trim, though, is a quite substantial Rs 2 lakh.

What’s next from Skoda?

Skoda recently halted bookings temporarily for the Rapid Rider, citing higher than anticipated demand for the entry-level variant. The carmaker has also said that bookings for the model are expected to resume in the next three months. The carmaker will also introduce a 6-speed automatic gearbox-equipped Rapid in the coming months.

Skoda will also reintroduce its flagship SUV, the Kodiaq, in the months to come. With no diesel version on the cards, the BS6 model will be powered by a new 190hp, 2.0-litre turbo-petrol engine. Skoda’s all-new Octavia executive sedan is expected to join the line-up early next year, and will be followed by the Vision IN concept-based midsize SUV – the first model built on VW Group’s India-specific MQB A0-IN platform.