Available only in diesel-automatic form, the Toyota Fortuner TRD Celebratory Edition gets a number of cosmetic changes inside and out. 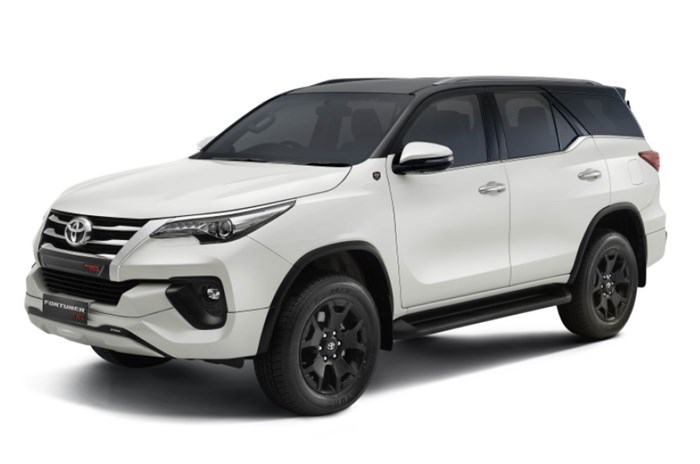 Toyota has added a special edition variant of the Fortuner to its line-up named TRD Celebratory Edition at a price of Rs 33.85 lakh (ex-showroom). Available only with the 2.8-litre diesel engine and six-speed automatic transmission in 4x2 configuration, the new variant celebrates 10 years of the Fortuner in India, and is Rs 2.15 lakh more expensive than the standard Fortuner 2.8D 4x2 AT.

Over the last decade, Toyota has sold close to 1.6 lakh units of the Fortuner in India, but the TRD Sportivo variant was first introduced on the current generation of the Fortuner back in 2017. Now, the 2019 TRD Celebratory Edition carries similar styling elements as the earlier TRD Sportivo variant, but has some new elements that differentiate it from the previous model.

Talking about changes to the outside, it’s available in pearl white colour with a dual tone black roof. Apart from that, the front also gets a TRD badge on the grille and a new bumper with faux skid plate. You also have new all-black 18-inch alloy wheels which aren’t available on the standard 2WD AT Fortuner. The rear remains mostly unchanged except for the new design of the bumper.

The dual tone theme continues on the inside as well. The maroon and black seats get TRD logos and the dashboard gets contrast red stitching. Apart from this, there are no changes made to the feature list, and the Fortuner continues to offer LED projector headlamps, 7-inch touchscreen with embedded navigation, 7 airbags, vehicle stability control with brake assist, hill assist control and ABS with EBD.

There are no mechanical changes from the standard Fortuner and it continues to be powered by a 177hp, 2.8-litre diesel engine. It competes against the likes of the Ford Endeavour, Mahindra Alturas G4 and Isuzu MU-X.