The Honda Civic, launched at Rs 17.70 lakh, will face competition from the Hyundai Elantra, Skoda Octavia and Toyota Corolla Altis. We pit the four executive sedans against each other on paper. 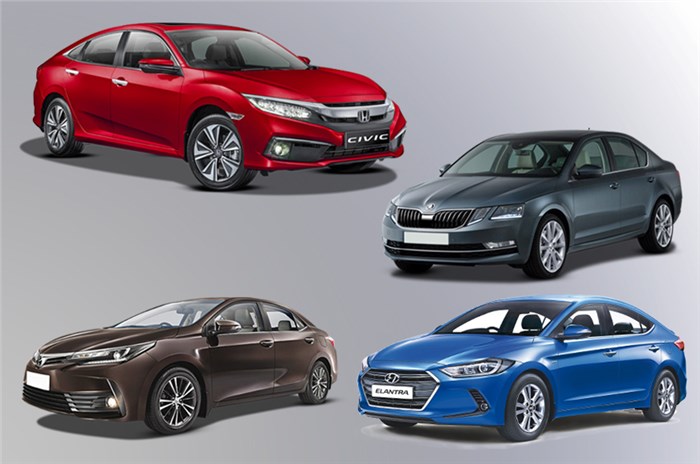 The all-new 10th-generation Honda Civic has launched in India, priced at Rs 17.70 lakh for the base Civic V variant and going up to Rs 22.30 lakh for the top-spec Civic ZX trim. Available in three variants and two engine options, the executive sedan enters a segment where it will compete against the likes of the Skoda Octavia, the Toyota Corolla Altis and the Hyundai Elantra. How does the Civic fit in? Comparing the executive sedans on specifications and price answers that with some clarity.

The new Honda Civic is larger than the last Civic sold in India. While it is about the same size as its rivals, the Honda is the shortest amongst its rivals. The Civic does sport the largest wheels and chunkiest tyres but the relatively large turning circle works against the Honda. The Civic also has the smallest boot and fuel tank. Skoda’s Octavia is the largest of the executive sedans, despite having the shortest wheelbase. Meanwhile, the Hyundai Elantra is about average in this department. The Corolla Altis petrol sports the largest fuel tank here, but on no other metric is the Toyota class-leading.

Like its rivals, the Honda Civic is available with petrol and diesel engines. However, the Civic petrol can only be had with a CVT automatic while the diesel is only offered with a 6-speed manual transmission. The Toyota Corolla Altis misses on a diesel-auto combo while the Skoda Octavia and Hyundai Elantra offer wide variety with petrol and diesel engines, each available with manual and auto transmissions. The Skoda Octavia has the most shining power numbers. Its 1.8-litre, turbo-petrol and 2.0-litre, diesel engines are the most powerful of the lot.

The Honda Civic diesel gets one up on its rivals with a class-best 26.8kpl fuel-efficiency figure, although the Civic petrol trails the Corolla Altis automatic (16.7kpl) and the Skoda Octavia 1.4, which comes with a 6-speed manual. In terms of fuel economy, the Elantra petrol is the least fuel-efficient while the diesel Hyundai posts decent figures.

Gadget lovers will be best served by the Skoda Octavia which gets the most goodies. It’s the only car with digital dials and also leads the tally with its seven airbags; though the Honda Civic does boast a segment-first lane-watch camera. The Toyota Corolla isn’t as well-kitted as its rivals, missing out on features such as Android Auto and Apple CarPlay compatibility and a sunroof; though it does get reclining rear seats. The Elantra continues to keep the middle ground – the equipment list isn’t segment-leading, but it is still decently kitted.

The Civic diesel comes in two variants while the petrol version is offer in three variants, so it’s possible to find the right version of the Honda for your budget. Do note, the Hyundai Elantra undercuts all the models here and correspondingly comes across as more value-for-money. The Skoda Octavia is the priciest of the executive sedans but its feature set and size do help bolster its case. Lower variants of the Corolla Altis are priced between the Civic and the Octavia while the higher trims cost a little more than the Elantra; which does not make the package as attractive.

On paper, then, the Honda Civic might not appear a game-changer. But it’d be premature to write the Civic off just as yet. How good the Honda is on the road and how well it compares with rivals in real-world performance, driving and economy will ultimately decide whether it could be the pick of the executive sedans. Stay tuned for our full review and comparison.