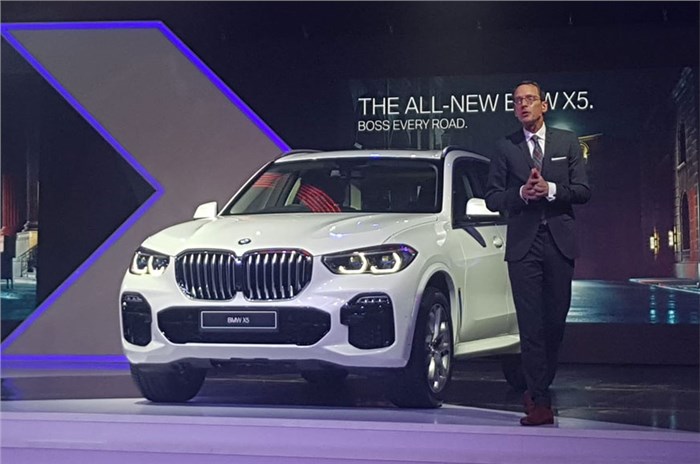 The next-gen X5 gets new interior and exterior styling, along with a 3.0-litre diesel engine.

BMW has just launched the fourth-generation of the X5 SUV in India at a starting price of Rs 72.90 lakh; the two higher variants cost Rs 82.40 lakh. The 2019 BMW X5, which is locally assembled at BMW India's plant in Chennai, is available with petrol and diesel engine options– the former comes only in the M Sport variant, while the latter will be offered in Sport and xLine trims. While BMW dealerships will have the diesel X5 in stock from today, the petrol models will be available later in 2019.

On the design front, the new X5 features a restyled front bumper with a larger kidney design grille, new headlights and LED daytime running lights; all of which tie-in with BMW’s new design language. At the rear, the new X5 sports chunk LED tail-lights and a restyled rear bumper. The M Sport pack for the petrol model adds more aggressive design themes.

Mechanically, the next-gen model can be had with either a 265hp/620Nm, 3.0-litre, six-cylinder turbocharged diesel engine in the X5 xDrive30d or with a 340hp/450Nm, 3.0-litre, six-cylinder turbo-petrol engine in the xDrive40i. The engines come paired to an 8-speed automatic gearbox that transmits power to all four corners via BMW’s xDrive all-wheel-drive system, along with adaptive air suspension, which are standard kit. A point to note: the petrol engine is BS6-compliant.

The new X5 is also larger than its predecessor in every dimension, which translates to increased interior space. The 40:20:40 split-folding rear seats helps boot space expand from 650 litres to 1,870 litres. Compared to the previous-gen model, the interior has received a major update as it gets an all-new dashboard layout that features two 12.3-inch digital screens. One of the screens replaces the analogue instrument cluster from the outgoing model with a fully digital unit. The other screen is the infotainment touchscreen display, which has also been updated.

The new X5 also gets BMW's Parking Assistant Plus - a feature that allows the SUV to self park and that has become increasingly common in the premium luxury SUV segment.

Considering the previous BMW X5 last received a major update back in 2014, it had been lagging behind rivals like the Mercedes GLE, Audi Q7, Volvo XC90 and the Land Rover Discovery. Now, with the next-gen X5, which comes with a two-year standard warranty package, BMW has a better shot at supremecy in this segment.