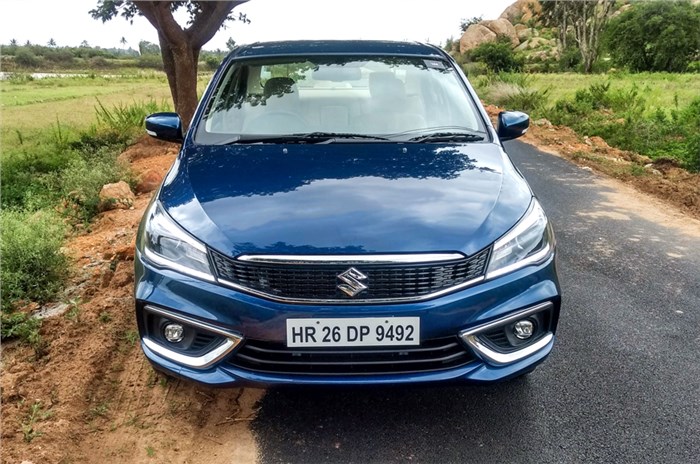 Priced from Rs 8.19 lakh, available in 11 trims and two engine options, here are the key things to keep in mind about the updated Ciaz sedan.

Maruti Suzuki’s updated Ciaz is finally here. The brand launched the facelift, priced between Rs 8.19-10.97 lakh (ex-showroom, Delhi), bringing with it more equipment, subtle cosmetic tweaks and a new petrol engine. With a wealth of information available about the new mid-size sedan, here are the five key points to keep in mind about the Ciaz facelift:

As is typical of facelifts from Maruti Suzuki, the new Ciaz isn’t all that different to look at compared to the outgoing model. Across all the trims, the front and rear bumpers, and the grille are new; and so is the shape of the headlamps. Higher-spec variants (Zeta and Alpha) get LED headlamps and tail-lamps along with chrome garnish on the grille. Meanwhile, the top-spec Alpha trim also gets LED DRLs and newly designed, 16-inch alloy wheels. The insides of the facelift are nearly identical to the pre-facelift model, although there is a new colour-display on the instrument cluster.

The level of safety kit has seen a serious uptick. While the previously available dual-front airbags and ABS with EBD carried over from the previous car, the new Ciaz also sports rear parking sensors, a speed alert system, seat-belt reminders for the driver and front passenger and Isofix child seat mounts. These are standard across the range. Top-spec trims now also get cruise control and automatic headlamps with an auto-levelling function.

One of the major highlights of the new Ciaz is that Suzuki’s new K15B motor makes its debut in the mid-size sedan. This engine has replaced the previous K14B 1,373cc, four-cylinder petrol motor that made 92hp and 130Nm of peak torque. This new four-cylinder engine, with a 1,462cc displacement, is capable of developing a maximum of 105hp and 138Nm of torque, and will also be offered on the second-generation Ertiga MPV due to launch in India in the coming months. Interestingly, this engine is also used on the international-spec Jimny, Suzuki’s small lifestyle SUV. Transmission options on the petrol engine are unchanged with a 5-speed manual offered as standard and a 4-speed torque converter automatic as an optional extra.

Mechanically, the diesel model gets the same setup as the pre-facelift model – a 90hp, 1,248cc, four-cylinder motor producing 200Nm of torque mated to a 5-speed manual gearbox. The brand is developing a new 1.5-litre, BS-VI-compliant diesel engine to replace this Fiat-sourced motor – although its arrival is still unknown.

Most fuel-efficient in its class

The Ciaz retains its title as the most fuel-efficient mid-size sedan. While the diesel engine’s ARAI-rated fuel efficiency is unchanged at 28.09kpl, the new petrol engine is even more fuel-efficient than the older unit, despite an increase in displacement. The new Ciaz petrol is rated at 21.56kpl for the manual and 20.28kpl for the automatic – an increase of 0.83kpl and 1.16kpl, respectively, over the outgoing petrol engine.

This bump in mileage is, in part, thanks to the mild-hybrid system installed on the K15B motor, which uses a lithium-ion battery mounted under the front passenger seat to run start-stop and torque assist functions. Brake energy regeneration helps to charge this battery. The addition of this mild-hybrid tech on the petrol Ciaz is a segment-first feature.

As we had reported earlier, diesel variants of the Ciaz facelift are priced lower than the pre-facelift model, despite having a higher level of safety kit and more equipment, both outside and inside. The outgoing Ciaz diesel variants (Rs 9.50-11.51 lakh) were priced very competitively in the mid-size sedan segment against diesel-engine rivals like the Honda City (Rs 11.10-13.88 lakh), Hyundai Verna (Rs 9.60-12.86 lakh), Skoda Rapid (Rs 9.95-13.93 lakh) and Volkswagen Vento (Rs 9.65-13.92 lakh). The facelift makes the Ciaz diesel an even better value-for-money proposition as prices have reduced by Rs 30,000-50,000 from the pre-facelift model, depending on the variant. However, diesel versions of the Hyundai Verna, VW Vento and Skoda Rapid have one advantage over the Ciaz – they have an automatic gearbox on offer.