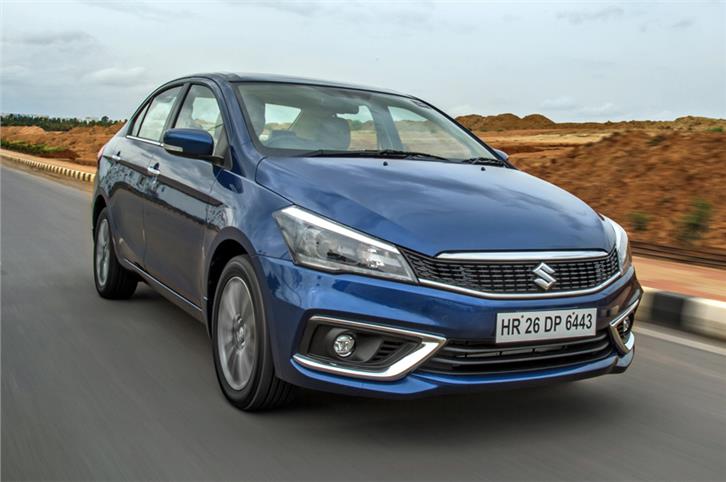 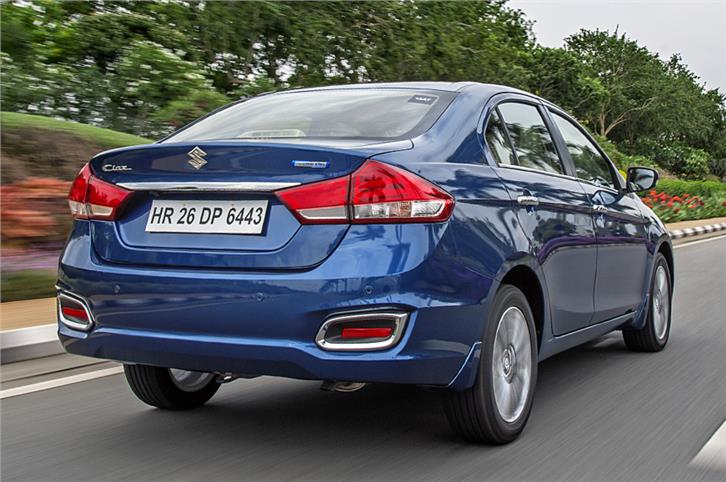 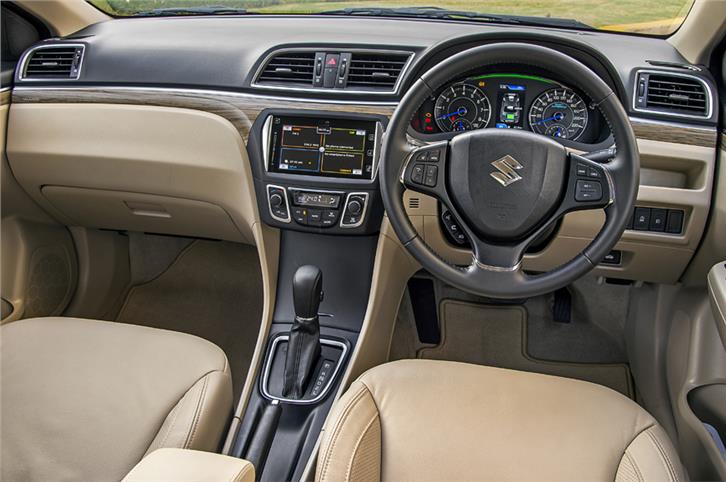 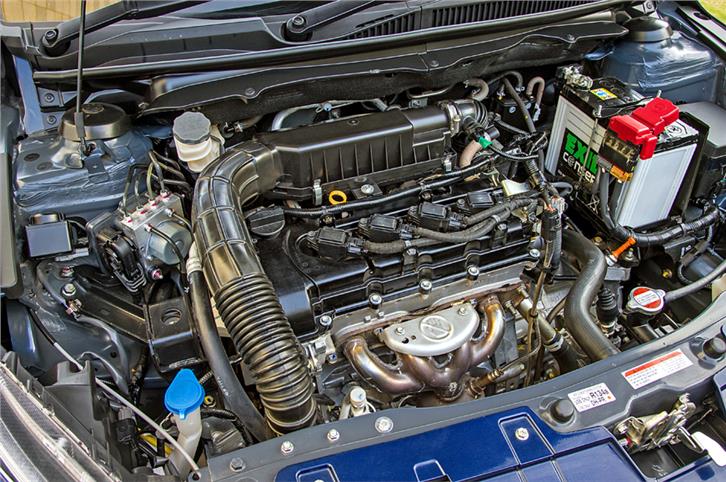 With a mild makeover and a new hybrid petrol engine, Maruti’s flagship sedan gets ready to carry on the battle in the midsize sedan segment.

Until the launch of the Ciaz, Maruti hadn't had much luck with a City rival. The Baleno sedan failed to make a mark, and the SX4 made good headway initially but lost out to competitors later. The Ciaz, however, has put up a strong performance so far, selling over 2,20,000 units until today and fighting it out with the top two contenders – the City and the Verna. In its second year, the Ciaz dethroned the Verna to claim the second spot in sales, and, last fiscal, it pipped long-time segment champ, the Honda City to the top spot. The last few months did see sales drop, though likely in anticipation of the updated Ciaz's arrival.

In its time in our market, the Ciaz also saw the addition of hybrid technology to its 1.3-litre diesel engine, and it shifted residence to Maruti's premium Nexa line of dealers. And now, about four years since its launch, it gets its first significant update which includes a mild facelift and a new larger petrol engine with hybrid tech. 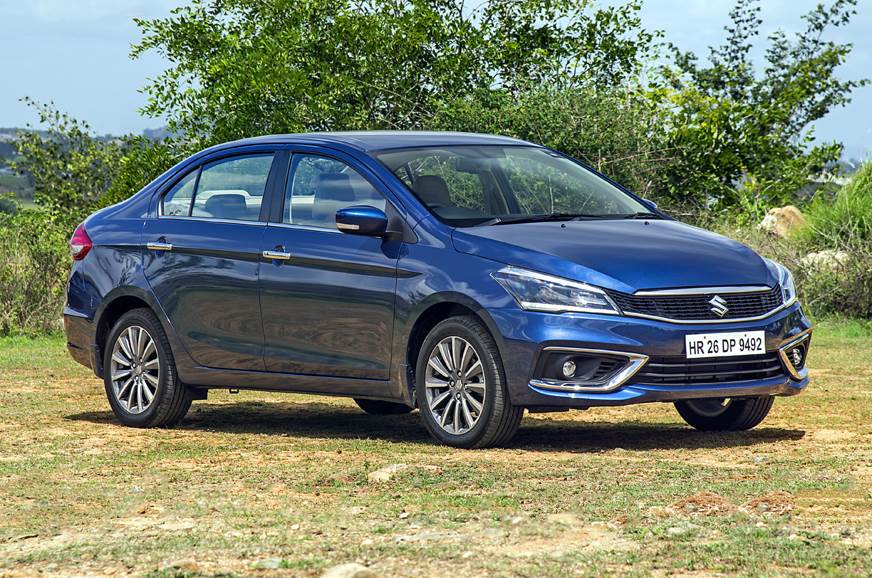 The Ciaz's design was pretty conservative  – a familiar Maruti approach of trying to please everyone – and with the facelift, it’s still the same. It’s only a mild makeover but it’s been crafted to look more premium and upmarket, and this works well for the Ciaz, as thanks to the sheer size, it always looked like it belonged to a segment up.

The front grille now stretches between the two headlights, and the top and bottom edge of the grille are outlined by chrome strips, giving the front a classy look. LEDs now dominate, with the new Ciaz getting LED DRLs, LED headlights and LED fog lights. 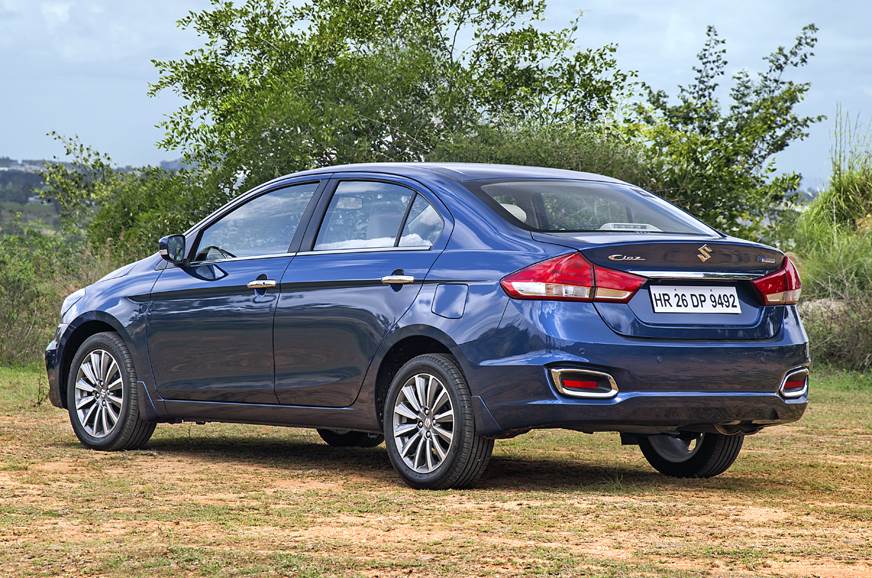 The horizontal slats seen on the earlier grille are now replaced by multi-segmented dashes with the 'S' logo placed at the centre. The lower end of the bumper too been tweaked, with the intake extending all the way to the redesigned fog light housing that's also wrapped in chrome.

When viewed from the side, the only change is a new design for the 16-inch alloys. The rear, too, isn't very different except for the addition of new LED segments within the tail-lamps.

While the makeover is quite light, it’s easily identifiable as a new look and one that goes well with the car's overall premium character.

About 4.5m long and 1.7m wide, the Ciaz is a big car – the biggest in the segment – and this translates to good room inside. The rear has loads of legroom and even with the front seats pushed back, there is still enough space for an adult to sit comfortably. The hybrid's additional lithium-ion battery sits below the front passenger seat. However, it doesn't really fowl with your feet; you have to stretch out your leg to touch it. Headroom, however, is tight and the driver's seat feels a bit too high, even in its lowest setting. One welcome change are the height-adjustable head restraints for the rear occupants, which, according to me, are placed at a comfortable height and didn’t protrude into my neck; taller occupants, however, may find it bothersome. As for luggage space, that's the same at a generous 510 litres, but the wheel wells do eat into the space. 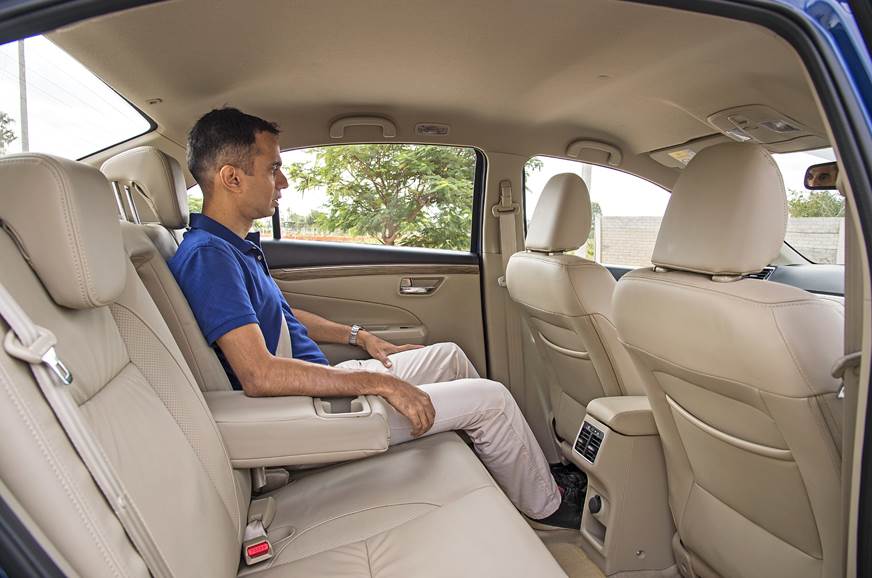 Plenty of legroom at the back; rear seat head restraint now adjustable.

At the front, the dash gets a new birchwood trim that looks very classy and elegant, along with light silver accents around the cabin. The steering wheel is the same unit as before but now features buttons on the right-hand side for the new cruise control system. There is a new instrument panel with a larger coloured multi-information display at the centre that gives you details of the hybrid drive system. Infotainment duties are handled by Maruti’s SmartPlay system.

The older Ciaz offered mild hybrid tech only on the diesel, but now the tech is available on the new K15B (1.5-litre K Series) petrol engine too. The systems, however, are different. Where the diesel has a single battery setup, the petrol has a dual battery arrangement, where the additional lithium-ion battery provides assistance more often thanks to its ability to charge more quickly. 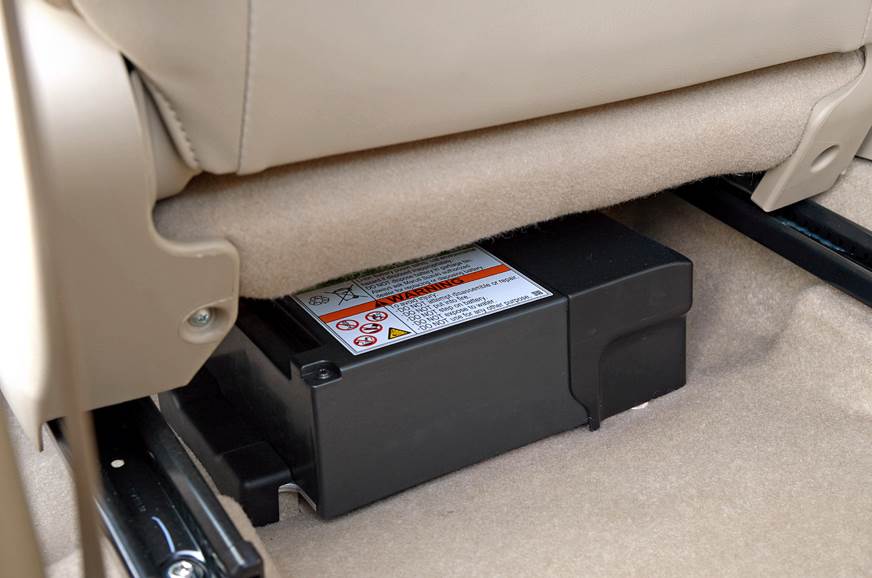 Additional lithium-ion battery sits under the front passenger seat; does not fowl with your feet though.

Driving the updated Ciaz, you will find the engine to be refined and smooth, with power coming in nice and low from about 1,800rpm. It feels nice and responsive around town. This, however, tapers off as you head higher towards the 6,200rpm rev limiter, and higher you will have to go, as out on the highway you really have to work the engine and gearbox to extract performance. 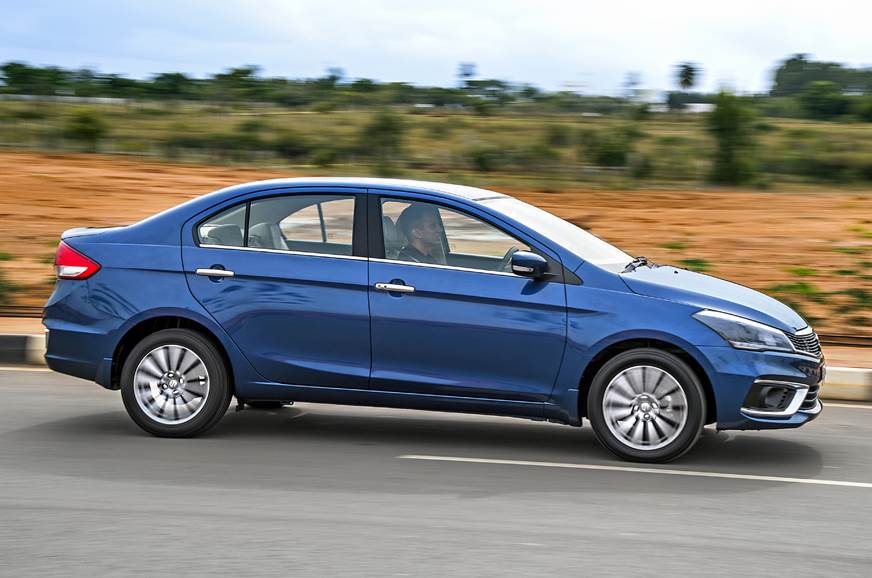 As for the gearboxes, the manual unit requires very little shift effort and the clutch is light as well. The four-speed torque converter auto 'box, however, isn’t the smoothest around and feels quite lazy and robs the engine of power. There is some relief with the Overdrive-Off button that prevents you from going into top gear, thus helping when overtaking and even descending where some engine braking is provided. Also via the lever, you can also use the '2' and 'L' position for additional engine braking. In terms of overall performance, though, the auto gearbox is strictly for convenience; it has no controls for manual gear changes and it does the 0 to 100kph run around 2sec slower than the manual.

The steering feel is nice and light, which is great for parking, but not so much in the twisties; in any case, the car is set up more for comfort than handling. As with the earlier car, the ride quality is super and the Ciaz had no trouble ironing out potholes and ruts we came across on our drive. Speed breakers too were cleared easily; our car scraped only twice going over the two dozen speed breakers we encountered. 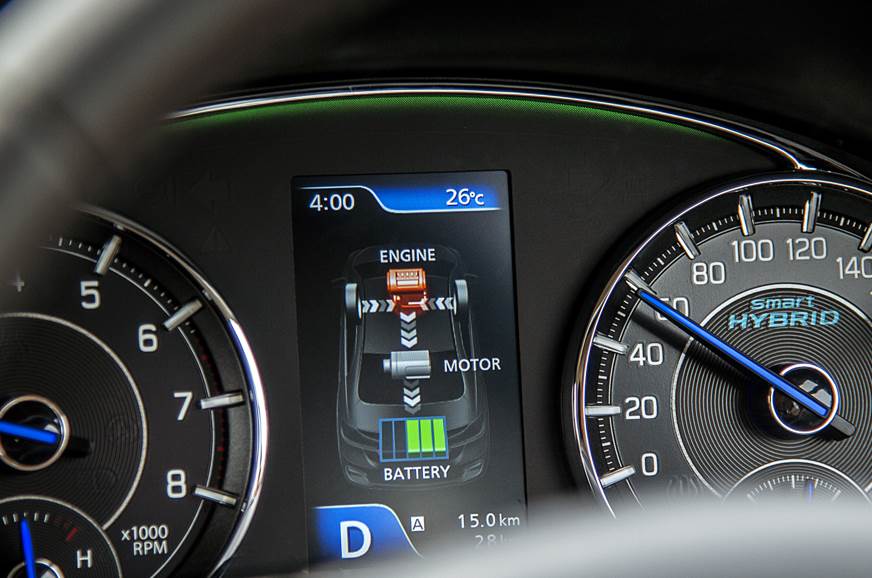 The instrument display shows the drive state. Shown here, is the battery charging phase during coasting.

What the BEEEEEP? No, this isn’t an expletive being edited out, but the sound of the speed warning system which beeps twice every 60 seconds above 80kph, and then continuously at speeds above 120kph, and, no, this can’t be turned off. In anticipation of an upcoming government directive that requires all cars to have a mandatory speed warning system, Maruti has rolled out the Ciaz with this function, along with a seatbelt reminder for the driver and front passenger too. The Ciaz facelift also gets additions to its safety list in the form of auto headlamps, electronic stability program (AT only), and hill hold assist (AT only).

Let's address the biggest change first – the new petrol engine. It gets a bump in power and the unit is pretty refined and smooth with good low-end grunt; just don’t expect peppy or lively performance further on. The engine's hybrid tech is also a welcome addition. While you can’t really feel the electrical assistance, the tech certainly plays a small part in the Ciaz's class-leading efficiency claim.

As for the rest of the car, the facelift has furthered the Ciaz's upmarket appeal. On the whole, however, the design still seems dialed back, unlike the flashier Verna or City; this then is more Ed Sheeran than David Guetta. 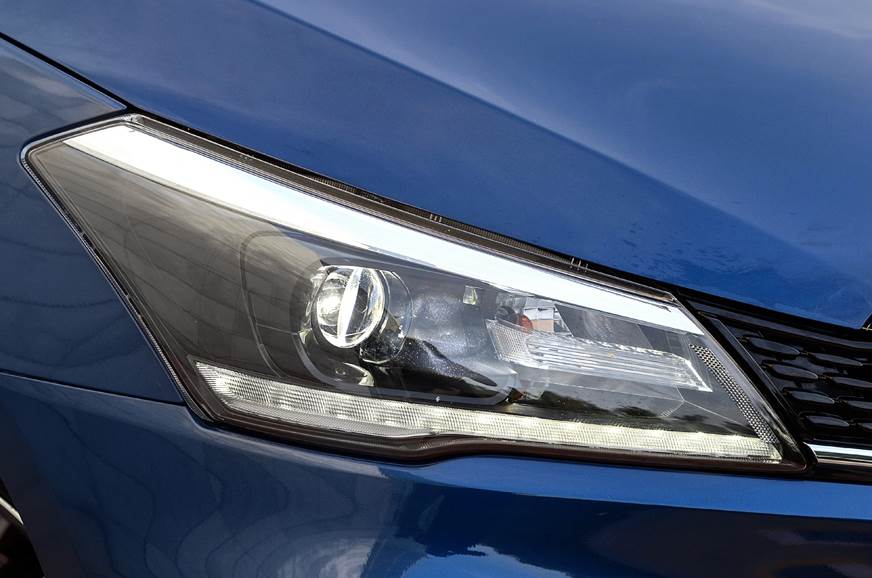 If this is your cup of tea, the refreshed Ciaz does make for a sensible buy. The car is big on the outside (a big plus in our image-driven market) and the size does translate to good space on the inside. Then, as far as equipment goes, it isn’t a leader in its class but it’s got what you’d expect. The ride is super comfortable too. And then there’s the cost; priced between Rs 8.19 lakh and Rs 10.97 lakh (ex-showroom, Delhi), Maruti has upheld its tradition of offering a product that's great value for money. So, is the updated Ciaz better than the City and the Verna? That's something a comparison will help us decide, but as things stand, it’s a good update and the three-way battle for the top spot seems all set to carry on.