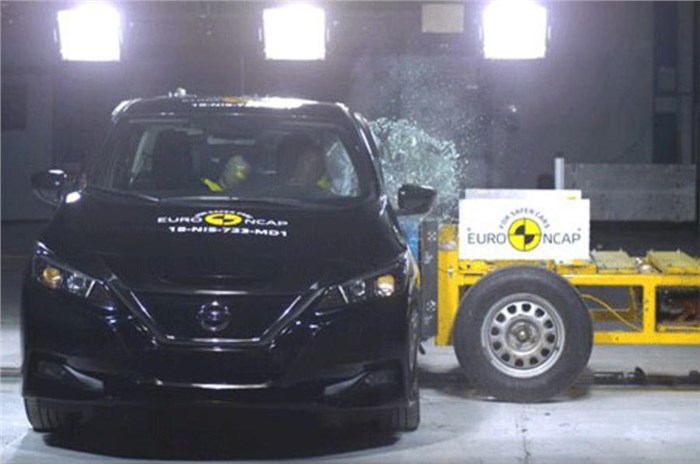 The new Nissan Leaf kicked-off Euro NCAP's new crash-testing procedure for 2018 with a bang by earning a full five-star rating.

The all-electric hatch was commended for its adult occupant protection, with a 93% score in this area. Its score of 86% for child occupant protection put the car at the top end of the family hatchback segment in this category. The Leaf also received a score of 71% for its safety systems, thus emphasising the effectiveness of the technology fitted in the new model.

Euro NCAP listed the Leaf's automatic emergency braking (AEB) technology (which is advanced enough to spot cyclists) as another standout feature for its success. The safety organisation considers such a system very important since electric vehicles are often inaudible when driving in urban areas. Testing AEB is a complicated part of the process because cars will need an array of sensors with a wide angle of view to detect fast-moving cyclists within a busy urban environment.

“This first Euro NCAP release of an AEB-cyclist-equipped vehicle shows what the joint efforts of governments and cyclists’ associations can achieve in collaboration with Euro NCAP,” said Robbert Verweij, Euro NCAP board member.

Euro NCAP's new procedure also asks cars to detect pedestrians in darkness and low-lighting conditions. In addition, there are new tests this year that examine emergency lane-keep assist systems capable of actively preventing collision with a vehicle travelling in another lane.

For the Indian market, Nissan is keen to bring this EV to the market. The Japanese brand’s Note e-Power is also under evaluation for an India entry and has been spied testing on our roads.