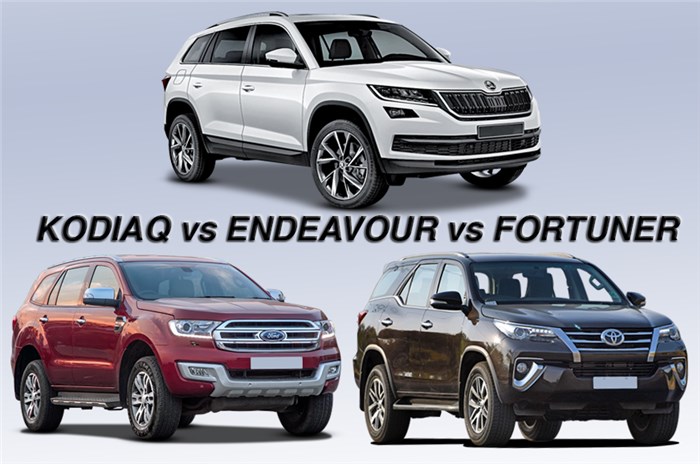 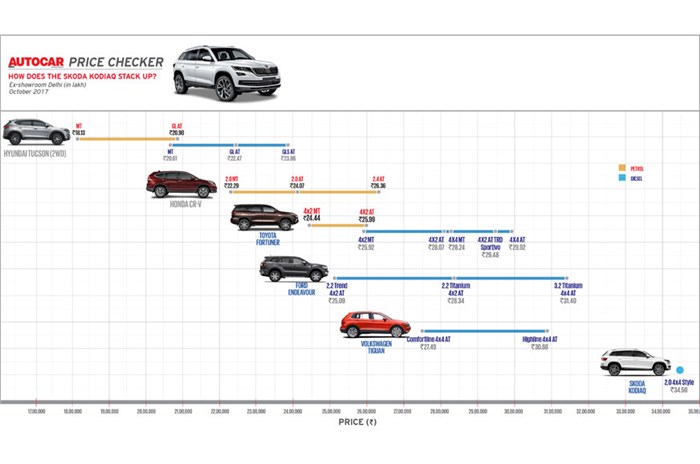 The Skoda Kodiaq is comfortable, spacious, refined and well-equipped. Can it give the Ford Endeavour and Toyota Fortuner a run for their money?

Skoda has finally entered the very-lucrative SUV segment with the Kodiaq, and we must say we are impressed. The Kodiaq is everything we expect from a Skoda – understated, spacious, refined, well-equipped, comfortable and filled with clever touches. Being a seven-seater AWD SUV, the Kodiaq will rival the Ford Endeavour and Toyota Fortuner, but how exactly does it stack up compared to them?

The Kodiaq retains many elements of the Superb such as the sharp ‘Czech crystal’ headlamps and angular tail-lamps. The Kodiaq also gets Skoda’s trademark butterfly grille. While the Kodiaq’s length is a lot more relative to its width and height, it still looks decidedly SUV-like thanks to the 18-inch wheels, high ground clearance, all-round body cladding, squared wheel arches and roof rails. It may not look as imposing as the Endeavour or the Fortuner, but it is sleek and contemporary nevertheless.

The Endeavour also strongly gives off that SUV vibe with massive wheel arches, front and rear scuff plates, high ground clearance and high shoulder line. Ford’s current design language is evident in the front with that bold, chromed-out grille and integrated headlamps. The Endeavour also gets a footboard and roof rails.

The Fortuner also looks like a proper SUV. In fact, the proportions of its two-box design are closer to traditional SUV dimensions than those of the Endeavour or Kodiaq. The Fortuner looks imposing from the front on account of the huge bumpers and a high-set grille that is flanked by wrap-around headlamps. The shoulder line is high and kinked beyond the B-pillar, along with flared and squared wheel arches, footboard and roof rails.

In conclusion, the Fortuner looks most SUV-ish, the Ford Endeavour is chunky and smoother while the Kodiaq takes the cake for sleekness and contemporary design.

The Kodiaq’s interior is again typically Skoda, something we are familiar with. The dials, steering wheel, stalks, switchgear and aircon controls are all standard Skoda, and so is the dual-tone, beige and dark grey interior colour scheme. Overall, the quality is great and the design is clean. A unique feature of the Kodiaq’s dash is that thick slab of trim that runs across the dash, serving as a second glovebox on the passenger side. The middle seat can be moved front and back as far as 180mm and can be folded down in a 40:20:40 split. It also gets its own climate control zone. The Kodiaq’s boot is 270-litres with all seats up, expandable to 630 litres with the rear seat folded down, and to a massive 2005 litres if the middle seat is flattened too. On the equipment front, the Kodiaq gets an 8.0-inch touchscreen infotainment system with Apple CarPlay and Android Auto, 12-speaker Canton stereo and 10-colour ambient lighting. There is also a panoramic sunroof, electrically-adjustable front seats, auto headlamps and wipers, powered tail-gate, hands-free parking assist, drowsiness sensor, magnetised flashlight and plastic ‘bumpers’ that pop out and protect the door edges when you open them and slip away again when you close them.

The Endeavour gets a leather-topped dash with a colour, multi-information display between the instrument dials. It too gets a touchscreen infotainment system, albeit with a smaller screen, that is equipped with Apple CarPlay and Android Auto. On the equipment front, the Endeavour gets electrical adjustment only for the driver seat, two-zone climate control, powered tail-gate, automatic headlamps and wipers, a tyre pressure monitoring system, heated side mirrors, panoramic sunroof and electrically folding rear seats.

The Fortuner’s dash isn’t as clean in design as compared to the Kodiaq or the Endeavour but it is leather-topped, like the Endeavour’s. The Fortuner is loaded with automatic headlamps with auto-levelling (though no auto wipers), electrical adjustment only for the driver seat, dual-zone climate control and a touchscreen infotainment system with six speakers.

All in all, the Kodiaq is probably the best equipped car in this specifications comparison, with the Endeavour a close second.

The Kodiaq has the smallest engine in this spec comparison and consequentially the lowest power and torque figures. However, it is to be noted that the Kodiaq is more of a soft-roader and not a proper off-roader like the Endeavour or the Fortuner. The Kodiaq gets all-wheel-drive but no dedicated off-road setting.

The Endeavour comes with two engine options – a 2.2-litre and a 3.2-litre mill, though it is the latter that will be closer to the Kodiaq in terms of price. The 3.2-litre mill is the biggest in this spec comparison and consequentially boasts the highest power and torque numbers. The Endeavour gets four-wheel-drive with dedicated off-road modes and hill ascent and descent control.

The Fortuner gets a 2.8-litre engine that sits between the Kodiaq and the Endeavour in terms of power and torque. The Fortuner is also the only one in this spec comparison to come with the option of a manual gearbox. It also gets four-wheel-drive and a host of off-road features such as terrain modes, a dedicated low-gear setting, downhill assist and electronic drive control to switch between 2WD and 4WD.

The Kodiaq has launched officially at Rs 34.49 lakh (ex-showroom, India). At this price point, Skoda’s SUV is Rs 3 lakh pricier the 3.2-litre Ford Endeavour and the Toyota Fortuner AT.