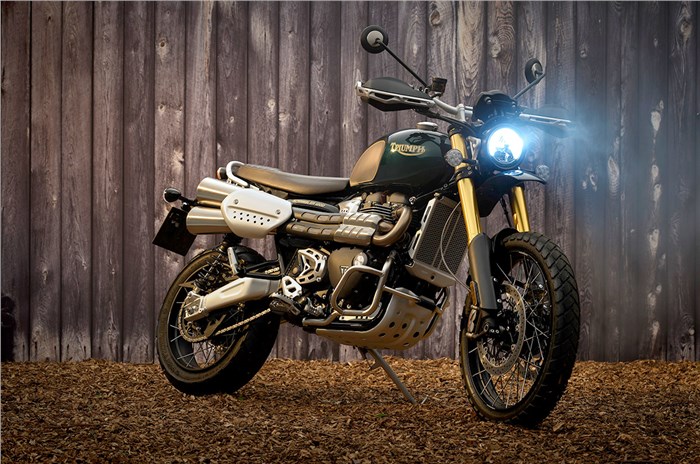 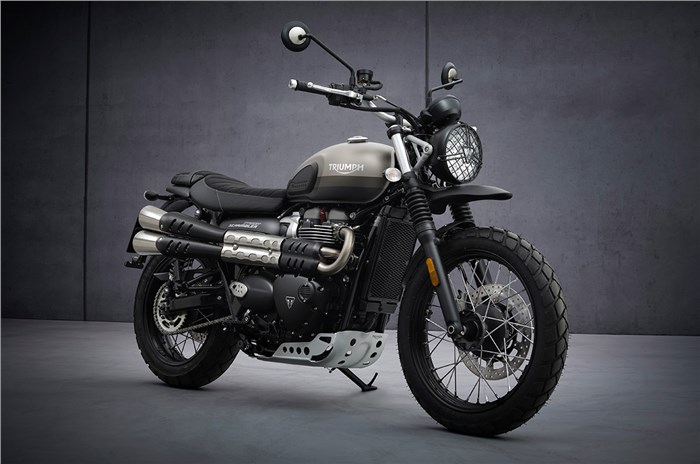 The Triumph Scrambler 1200 Steve McQueen pays tribute to the legendary movie star and motorcyclist. It is based on the 2021 Scrambler 1200 XE variant and is mechanically identical.

The Scrambler 1200 Steve McQueen has been conceived in association with the McQueen family. It is inspired by the original competition-spec Triumph TR6 that Steve McQueen used to carry out a jump sequence in the 1963 movie, The Great Escape.

What makes the Triumph Scrambler 1200 Steve McQueen edition special are some of the exclusive cosmetic enhancements.

To begin with, the bike gets a new Competition Green paint on the fuel tank replete with hand painted gold lining, gold heritage Triumph logos and brushed foil knee pads. Adding to the retro effect is the brushed aluminium Monza-style fuel cap and brushed steel tank strap. The front and rear aluminium mudguards are finished in the Competition Green shade as well. In fact, this green shade contrasts well with the gold front fork as well as the brown bench seat, with stitched ribbing for that classic look.

The Scrambler 1200 Steve McQueen edition also gets a radiator guard and crash protection around the engine as standard.

The Scrambler Steve McQueen edition is limited to 1,000 units globally, of which 25 have been marked for India.

Each motorcycle has a few interesting touches that add to the sense of exclusivity. This includes a unique Steve McQueen branding on the fuel tank and handlebar clamp. Each bike is individually numbered and comes with a certificate of authenticity, bearing the bike's VIN number as well the signatures of Triumph’s CEO, Nick Bloor, and Chad McQueen, son of Steve McQueen.

So far, Triumph India was selling the Scrambler 1200 in the XC variant and the company has stated that the 'Steve McQueen' editions will be the only XE variants to go on sale this year.

To reiterate, the Scrambler 1200 XE is powered by a 1,200cc, parallel-twin engine that develops 90hp at 7,250rpm and 110Nm at 4,500rpm. Compared to the XC, the XE variant gets fatter front fork, longer suspension travel, higher ground clearance, taller seat height at 870mm and an Off-road Pro mode.

The Triumph Scrambler 1200 Steve McQueen edition is priced at Rs 13.75 lakh and can be booked at Triumph showrooms in India.

The Street Scrambler 900 Sandstorm Edition pays homage to Triumph's adventures in the deserts of Baja Peninsula, Barstow and El Mirage to the Mojave.

Mechanically, the limited-edition motorcycle is identical to the standard 2021 Triumph Street Scrambler 900, albeit with a few differences. This includes a unique Sandstorm colourway, with Matt Storm Grey and Ironstone highlights on the tank.

The Sandstorm edition also gets a headlight grille, high-mount front mudguard, rubber grip pads on the tank and a tail tidy unit that incorporates an LED tail-light and the number plate. In essence, these bits are accessories on the regular Street Scrambler 900 but available as standard on the Sandstorm Edition.

The Triumph Street Scrambler 900 is limited to 775 units worldwide, of which 25 have been allocated for India. Each motorcycle will come with a unique personalised certificate of authenticity stating the bike’s VIN number.

The motorcycle is priced at Rs 9.65 lakh and can be booked at Triumph showrooms across India.