Highlights include a liquid-cooled engine, an upside-down fork and completely different bodywork compared to the current Himalayan. 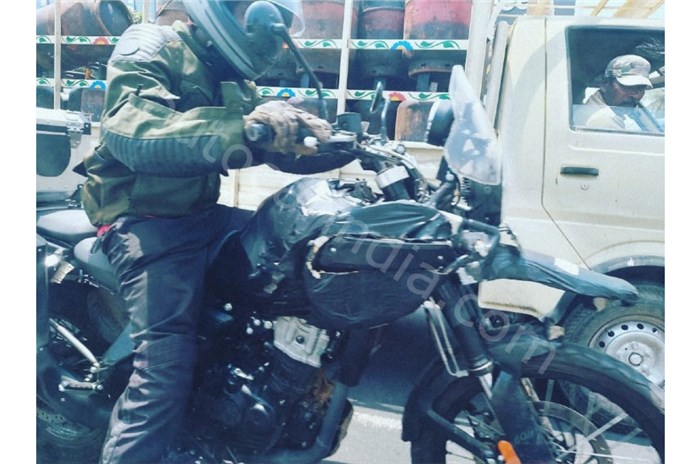 The Royal Enfield Himalayan 450 has been spotted for the first time, revealing some very interesting details about what the future holds in store for the company’s popular adventure tourer. Most notable is the presence of a fin-less, flat-sided liquid-cooled motor. While RE has deployed oil-cooling on some of its more recent models, it has never done a full-blown liquid-cooled engine before.

Going by the technological leap forward in the cooling department, it’s also quite likely that this engine will get a 4-valve cylinder head, in contrast to the current bike’s 2-valve layout. This is something that RE has already done on the 650cc twins. What all this means for prospective buyers is the possibility of significantly higher output levels from this engine, more than you’d expect from just the extra displacement it brings over the current 411cc motor.

Of course, a higher performance engine is going to have higher fuel demands, and the fuel tank on this test mule seems a good deal larger than on the current motorcycle, rising up quite high from the rider’s seat. Indeed all the bodywork seems to be different, suggesting that this bike will get a completely new look. One design element that does seem like it will be retained is the round headlight, but the heatsink on the back of the headlight unit suggests that this could be an LED unit.

Other noteworthy bits include an unusually long front beak and redesigned jerry can holders. Instrumentation seems to be borrowed from the Meteor, but you can expect this bike to have its own instrument cluster design by the time it makes it to production. Along with the motorcycle itself, RE also seems to be testing accessories, with this test mule carrying an aluminium top box and panniers.

Underpinnings are a relatively high-spec affair, with an upside-down front fork, metal-braided brake hoses and wire-spoke wheels, with the front appearing to be a 21-inch unit. No Royal Enfield motorcycle currently on sale sports a USD fork, though certain test mules of the upcoming 650cc cruiser models have been spotted with one, and that motorcycle is likely to hit the market before the Himalayan 450.

This test mule still seems quite rough around the edges, and this is only the first sighting of this bike on our roads. Add to that the fact that most recently launched RE bikes have undergone testing for quite a lengthy duration before debut, and it’s safe to say that an official rollout of the Himalayan 450 is still quite some time away. 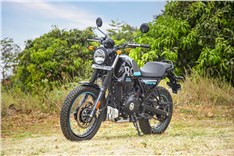 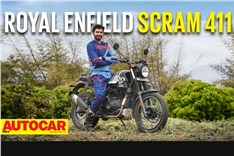