The new motor will displace 650cc and produce 47hp and 53Nm of torque. 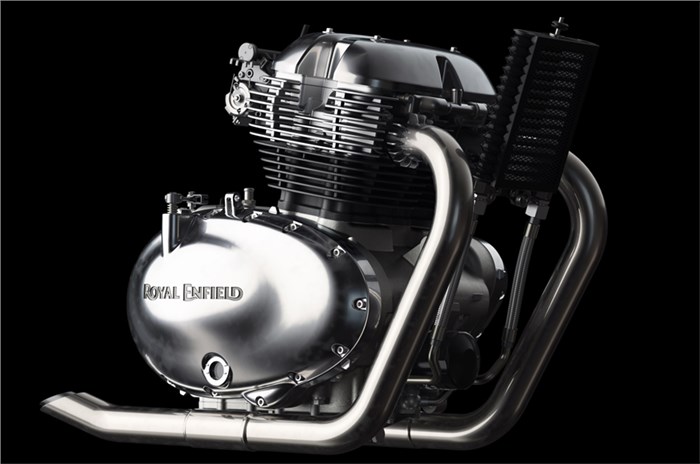 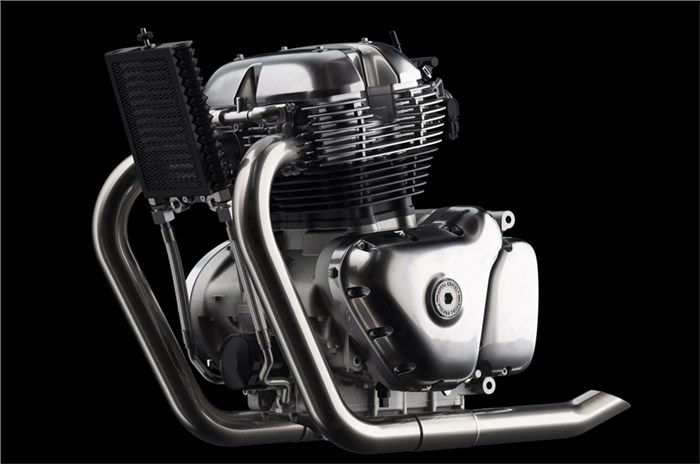 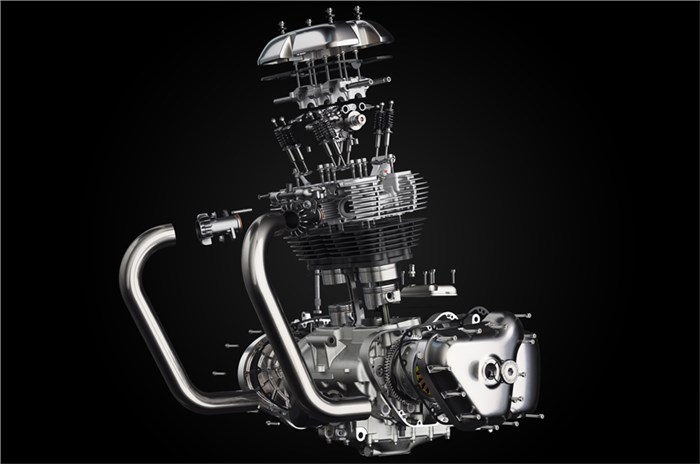 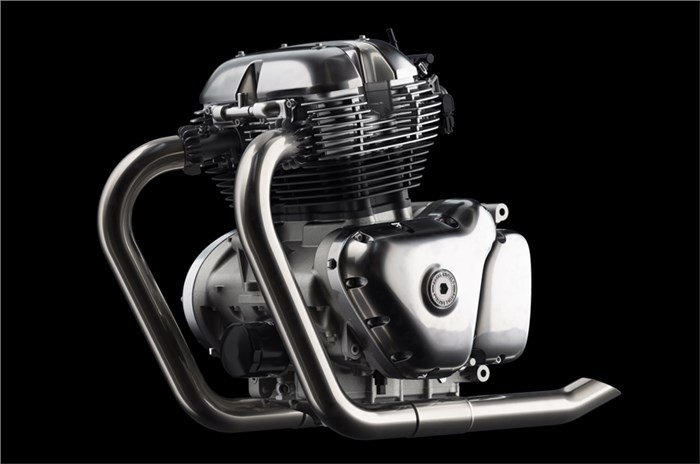 A couple of days short of the reveal of the full motorcycles at EICMA, Royal Enfield has taken the wraps off the engine that will power the new bikes - yes, there will be more than one model unveiled at launch with the new engine.

An all new motor

The new engine is a complete ground up effort and the company stresses that it has nothing to do with the firm’s existing single cylinder engines. First, let's address the capacity. The 650cc mark was the planned displacement from day one, so all the talk of 750cc or higher engines just turned out to be internet conjecture. Royal Enfield says that they wanted their new bikes to be aspiring, but also affordable and the 650cc capacity is at a sweet spot where it makes for a good upgrade from the 350 and 500 singles, but is not a step too far. Another advantage is that with this level of power, the engine slots under Europe’s learner legal A2 licence regulations, thus opening up the potential to tap into new riders as well.

The 648cc engine will be air-cooled to stick with Royal Enfield’s heritage and the cases have been designed after the Mark II Interceptor. An oil cooler is employed for additional engine thermal management. Bore and stroke are 78mmx67.8mm and the engine uses a four valve SOHC layout and a 270-degree forged crank. The 270-degree firing order helps balance secondary vibrations while a balancer shafts takes care of primary vibrations. Power is sent to the rear wheel via a new 6-speed transmission that uses a slip assist clutch for easier modulation. The clutch is a heavy duty unit, as is the alternator which is beefed up to handle the additional load from running any accessories.

Compression ratio is a relaxed 9.5:1 which is good enough for a healthy peak power of 47hp at 7,100rpm while a maximum of 52Nm arrives at a low 4,000rpm.These figures and the rpm they arrive at hint at strong, but unstressed performance. Royal Enfield says that this bike doesn't have the trademark thump of its singles, but instead produces a signature rumble thanks to that 270-degree firing order. From the little that we heard in the teaser video MD and CEO Siddhartha Lal shared in his video on Instagram the motorcycle emits a deep and throaty rumble - quite nice indeed. The fuel injected engine will be Euro 4 and BS4 compliant at launch and can be scaled up to meet the stricter norms of Euro 5 and BS6 when the need arises.

The motor is still in the pre-production stage and we were given a surprise treat of watching it fly by when we were touring the  test track near RE’s new, high-tech test centre at Bruntingthorpe. The bike was carrying considerable pace and it was hard to grab a clear photograph. RE says that it can hold a pace of 130-145kph ‘without feeling overstrained’, so it looks safe to estimate to a top speed upwards of 160kph. Royal Enfield says they've put in over 10 lakh test kilometers in multiple environments including India and Europe. The Indian team and the team at the UK test centre are equally involved with the development and RE is confident that its testing regime is up there with the most stringent in the world. The result should be significantly higher levels of quality than we've seen with previous products. We've had a tour of Royal Enfield's new test centre and it's an advanced facility that will no doubt contribute to improving upcoming products in terms of performance and quality. But we'll get to more on that in a separate article.

What kind of bikes will it power?

We’ll have the full details at the press launch in EICMA on 7 November at 20:30 IST. For now, we can tell you that one of the bikes will be a standard, while the other might be something along the lines of a cafe racer. The frames for these motorcycles is also new from the ground up and from what we can tell, the bikes will feature classic retro styling with simple clocks and a single disc upfront. ABS will be standard.

If all sticks to schedule, Royal Enfield plans to start rolling out these bikes to the initial lot of markets by April 2018. Additional markets will receive the bikes as the year progresses. We believe India should be among the first lot of markets. Unlike the Himalayan, which was developed in different specs for different markets, RE says the new bikes will be sold in one spec worldwide.

Who will they be targeted at?

With these new machines, Royal Enfield is targeting a multitude of different customers. The A2 licence friendly power and easy riding characteristics that the company promises these bikes will have means that new riders will certainly be on the radar. Existing RE customers are another huge base to tap into - the company has sold a whopping 2.5 million bikes since the UCE engine first debuted in 2008 and that's an enormous number of customers who could be looking for something to upgrade to. The third set of potential customers are those who like, or are interested by the brand, but have no interest in the current products. And finally, while RE repeatedly states that they are more focused on self improvement than beating the competition, rival machines are also an area of focus. What these rival bikes are is yet to be revealed.