The scooter is seen emitting smoke for a period of time before bursting into flames. 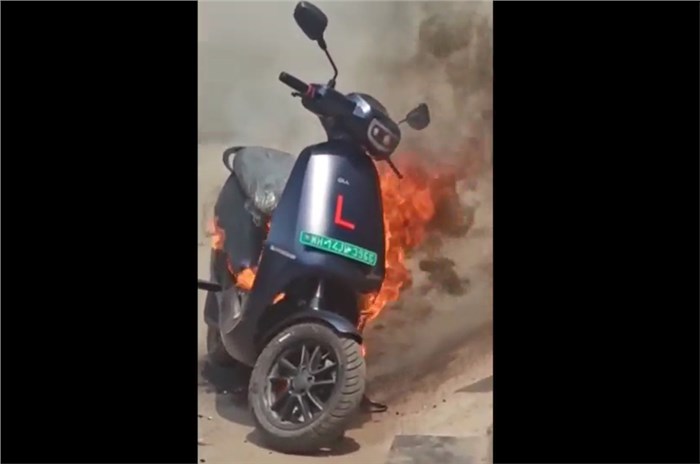 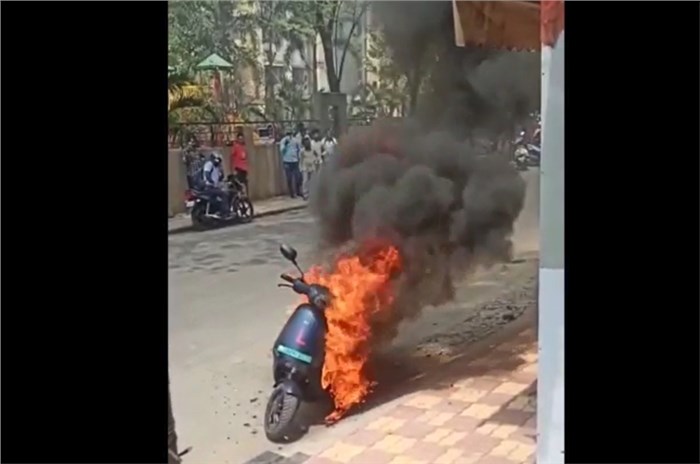 An Ola electric scooter caught fire in Pune earlier today. Multiple videos have emerged of a blue S1 (it’s not clear if this is the standard S1 or S1 Pro) electric scooter parked on the side of the road with thick white smoke pouring out from underneath the bodywork, before the scooter quite literally bursts into flames. Ola says that it is in touch with the owner of the scooter, who is said to be safe.

This is by no means the first electric scooter to catch fire in India, but it is definitely the most prominent one. While it is too early to state for certain what the cause is, the nature of the thick smoke and the location on the scooter from where it was emanating, suggests that this scooter may have suffered from thermal runaway within its Li-ion battery pack.

This is a known phenomenon with such battery packs where, due to overheating, the internal temperature and pressure of the battery rises at a quicker rate then can be dissipated. The overheating can be caused by numerous factors such as electrical shorting, rapid discharge, overcharging, use of the wrong charger, poor design or inadequate cooling. The scooter in this video does not appear to have been plugged in for charging.

What’s dangerous about this phenomenon is that once one battery cell goes into thermal runaway, it produces enough heat to cause adjacent battery cells to also go into thermal runaway. This produces a fire that repeatedly flares up as each battery cell ruptures and releases its contents. These types of fires can be very difficult to put out, since the batteries contain both the fuel as well as the oxidiser.

In its statement regarding the incident, Ola said, “We are aware of an incident in Pune that happened with one of our scooters and are investigating to understand the root cause and will share more updates in the next few days. We’re in constant touch with the customer who is absolutely safe. Vehicle safety is of paramount importance at Ola and we are committed to the highest quality standards in our products. We take this incident seriously.”

In our experience with the Ola S1 Pro, we found that the performance would drop significantly when the scooter was ridden hard for a short duration, due to thermal issues. This happened both at the first ride event in Bengaluru, and once again when we tested it a few months later in Mumbai, even though the company had noticeably turned down the performance of the motor by this point.

Heat-related performance drops aren’t the only issue customers have faced, and there have also been some reported instances of the scooter riding backwards when set in a forward mode and vice versa – this is something that we experienced in our time with the S1 Pro as well.

Ola says it uses Li-ion battery chemistry for its e-scooters, which is a traditional NMC (Nickel Manganese Cobalt) composition, where the cathode material is a mixture of these three metals. These cells are sourced from a leading manufacturer in Korea.

While this design does offer advantages like high energy density, it is also far more prone to thermal runaway than some other slightly different Li-ion chemistries. In recent times, we have seen many manufacturers going down the path of using LFP (Lithium Iron Phosphate) batteries, which is a type of Li-ion battery where the cathode material is LiFePO4 (Lithium Iron-Phosphate).

Tesla announced last year that it will use LFP batteries for all its standard range cars, and closer to home, the recently launched Oben Rorr electric bike also uses an LFP battery. While this type of battery does have a slightly lower energy density, there are a number of advantages, including longer life and a far lower risk of thermal runaway – factors that might make it a safer choice in Indian climate.

LFP batteries have an intrinsically safer cathode material than NMC batteries, and have a much better high temperature tolerance. As a result, it is believed that LFP batteries provide superior thermal and chemical stability compared to NMC batteries. As per current research, an LFP battery will only enter a thermal runaway condition at 270deg Celsius, whereas a typical NMC battery can enter thermal runaway condition as low as 150deg Celsius.